A Walk Around Kampong Glam - Fragrance of Devotion & Tales of Deceit....

In our next part of the Kampong Glam walk, we proceeded to end of Muscat Street, where the majestic Sultan Mosque stood. 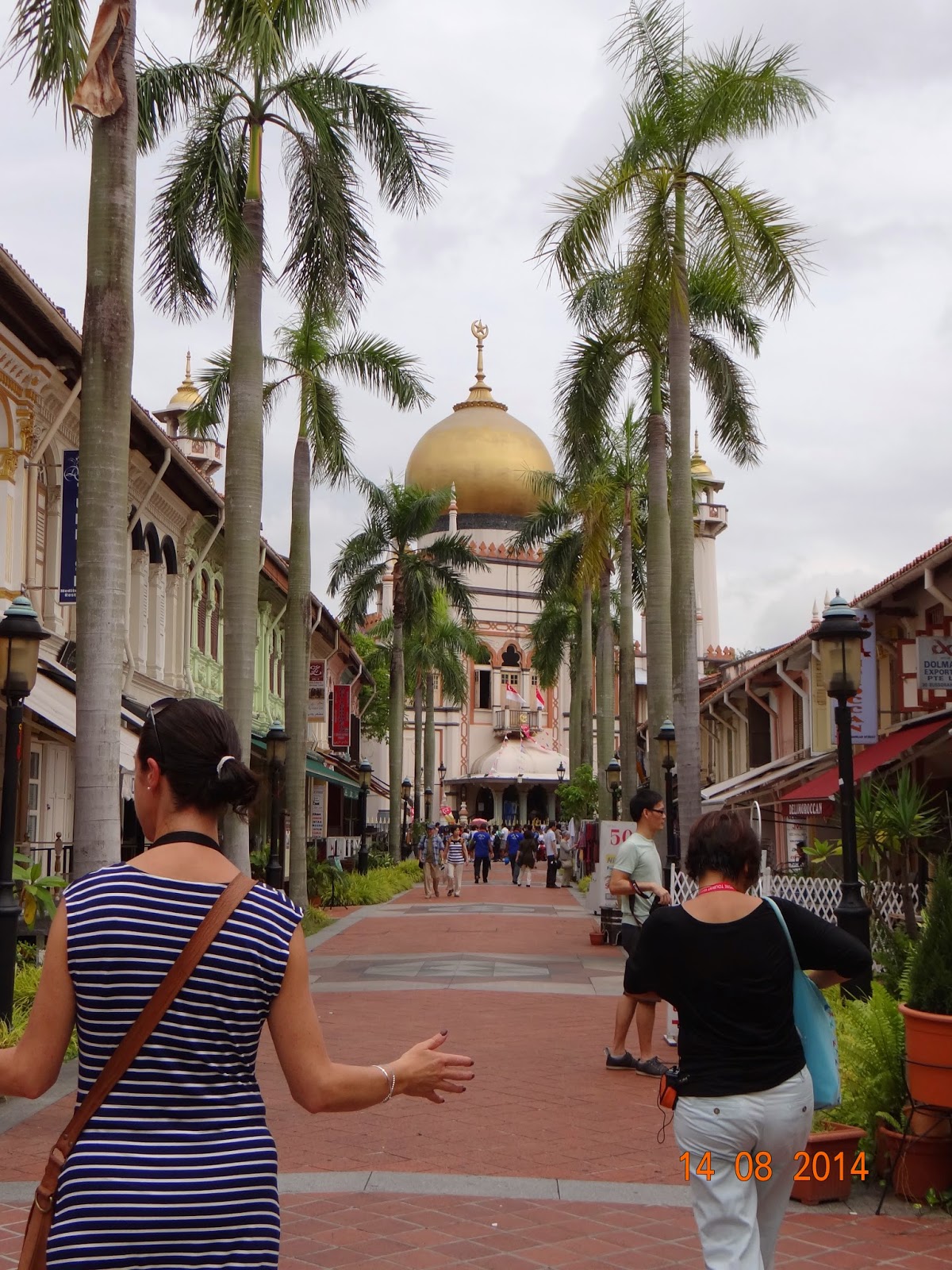 The erstwhile rule of Johore, Sultan Hussain then decided to build a mosque in Singapore, befitting his status. He constructed the mosque next to his palace from 1824 to 1826 with funds provided by the East India Company. The mosque was built in Malay style, back then. 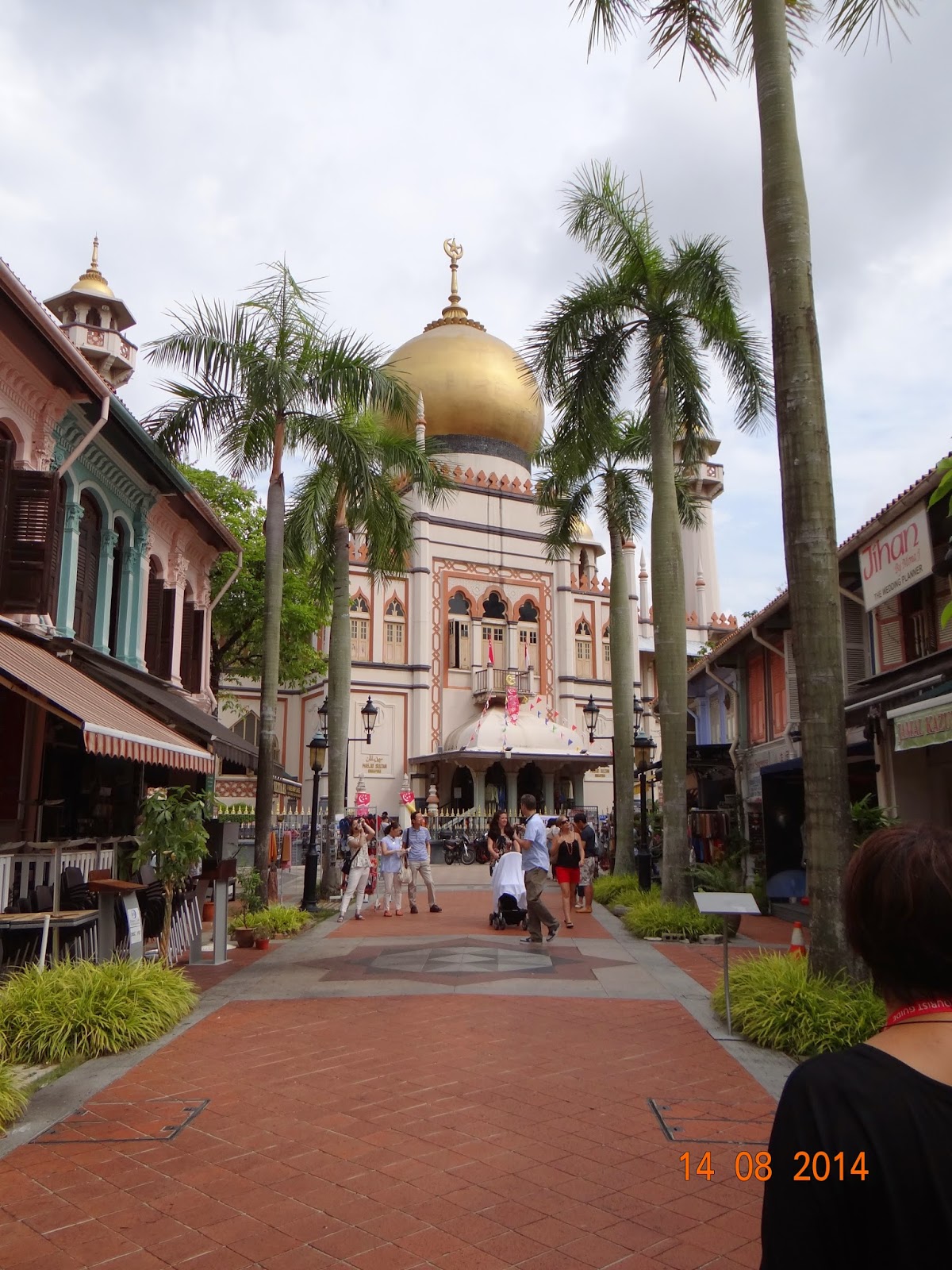 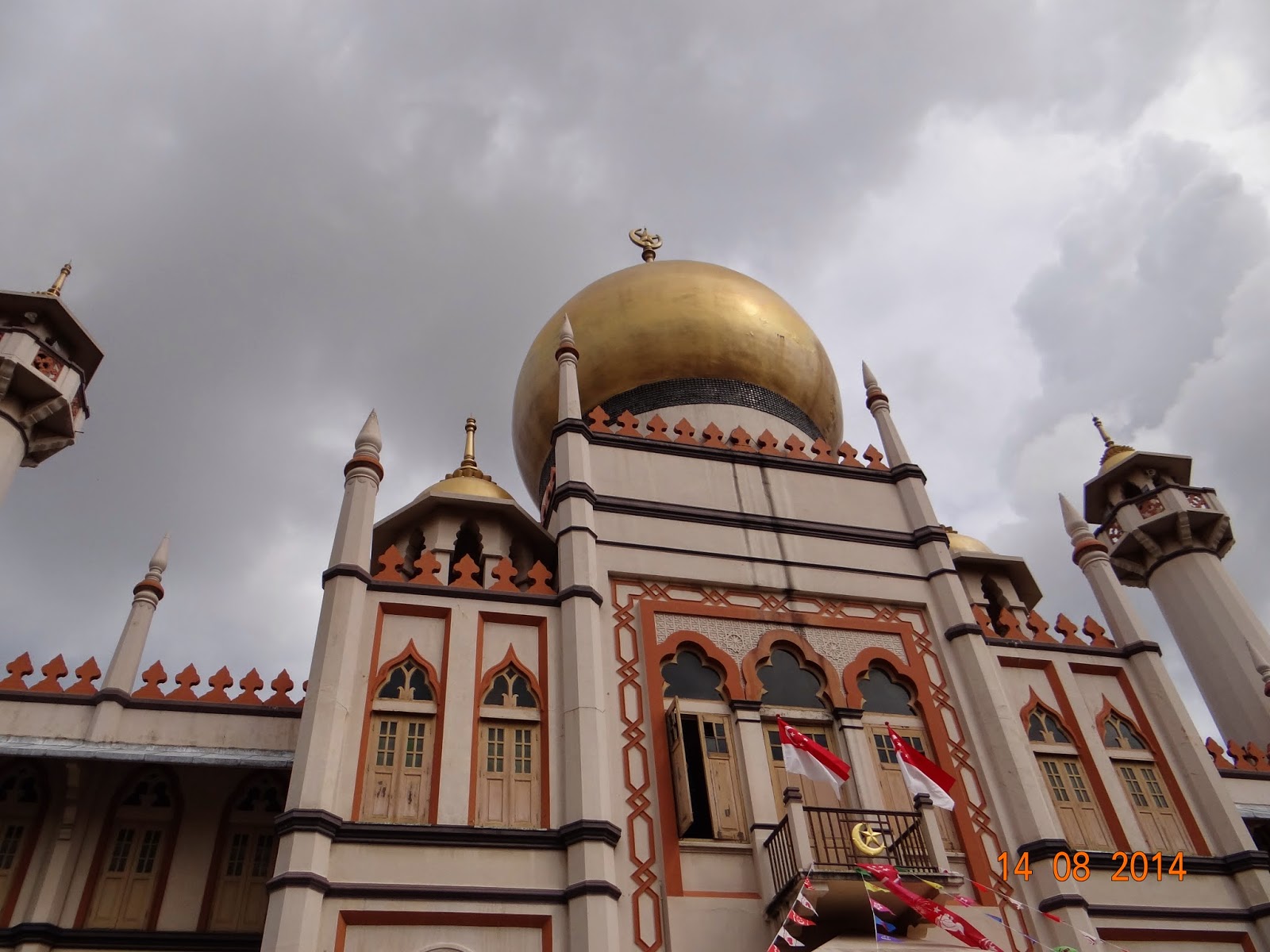 By the early 1900s, Singapore had become a thriving centre for Islamic commerce, culture and art. And the Sultan Mosque soon became too small for the growing community. In 1924, the old mosque was broken down and the present structure was constructed. The new structure was declared as a national monument in 1975.
In order to maintain public order, the mosque has stopped the tradition of azaan or calling out people for prayers. I found that really appreciable how all this was amicably done.... Perhaps, that's why Singapore is the Singapore we know of - orderly, neat and quiet.....
We spent some time inside the mosque appreciating the beauty of the architecture. Being non-Muslims, we weren't permitted beyond a point. And those of us in the group who were wearing shorts or skirts had to wear a blue gown to be "appropriately" covered. 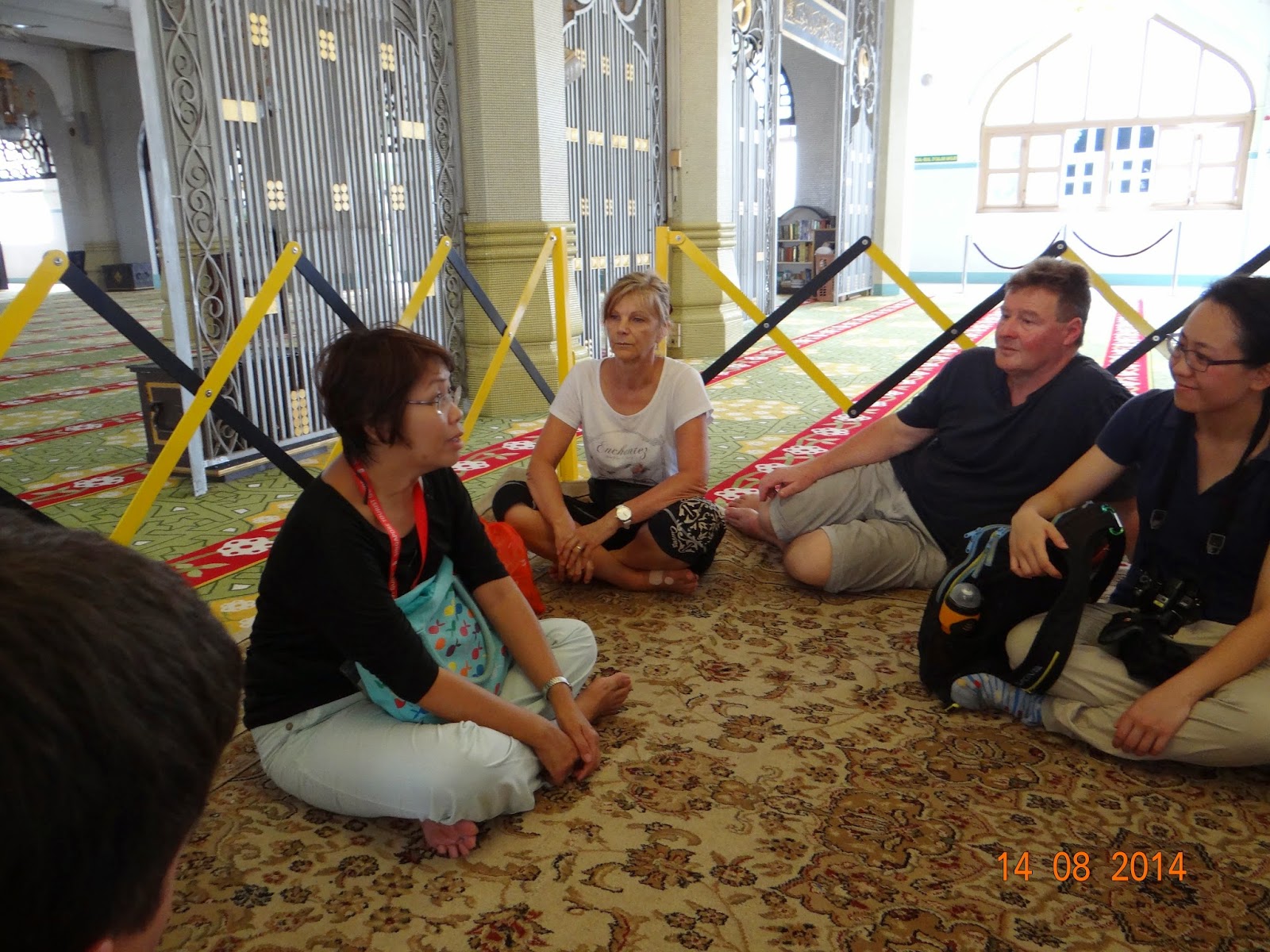 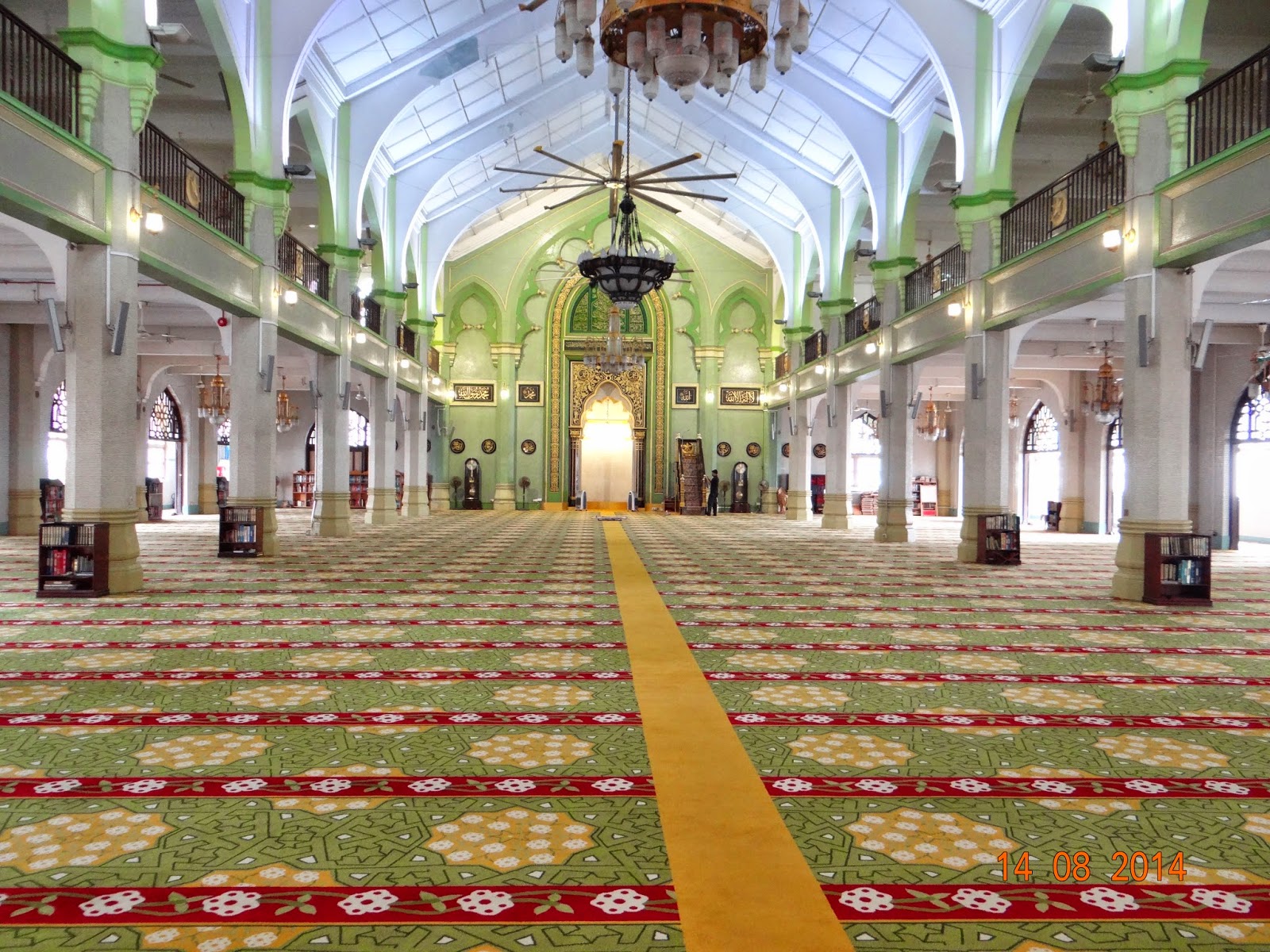 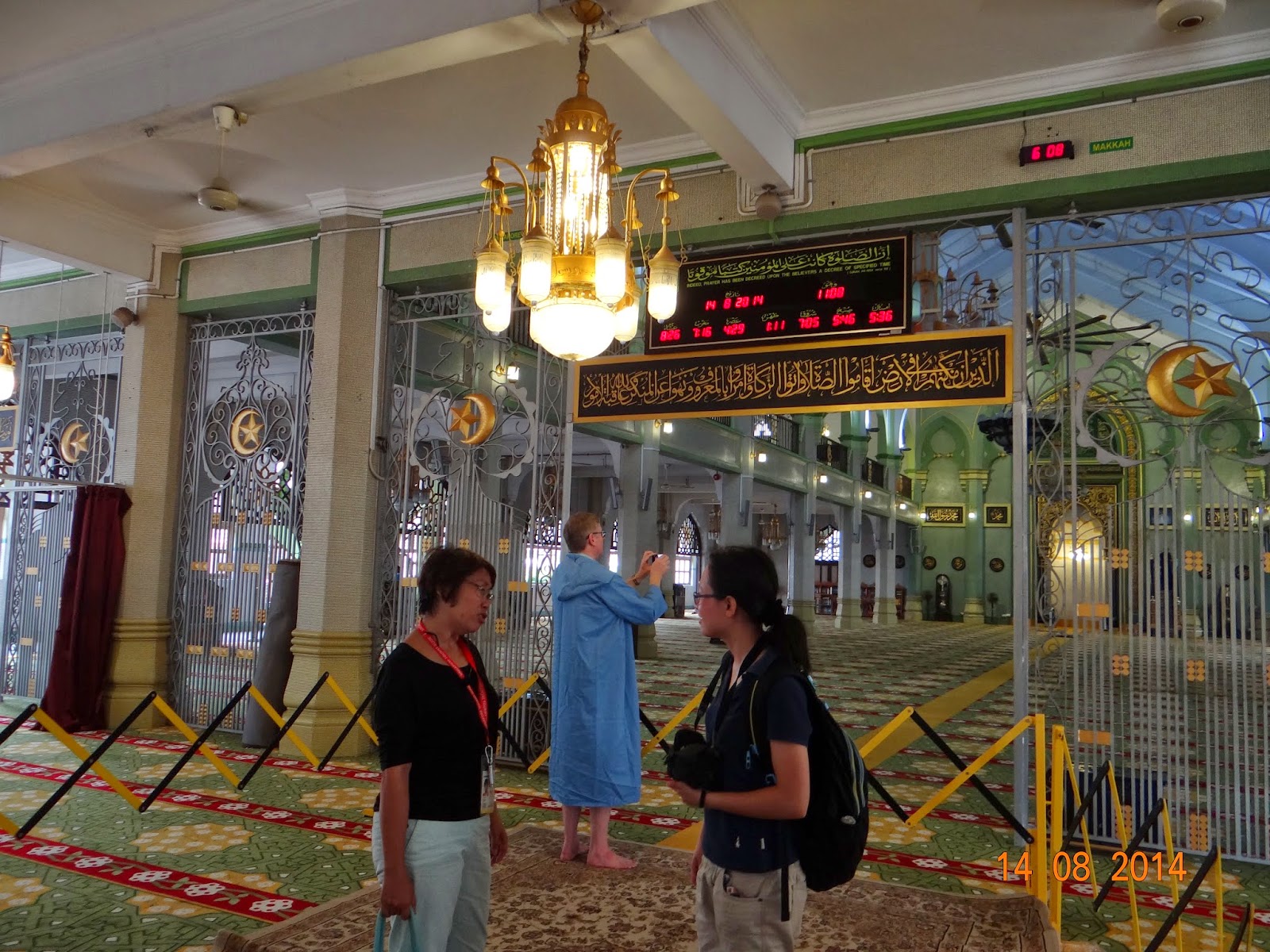 I got into a discussion with a middle-aged Australian gentleman, from Perth, Western Australia, who was a part of our group. This was his first trip to Singapore and he did find life in Singapore a lot hectic. He was surprised to see "so many people" in the city. He narrated an interesting account of sparsely populated Western Australia is - "If you drive out of Perth in X direction, the GPS would say - Next turn 1300 kilometers ahead!"
Now that was real amusing....
This gentlemen suggested that I do a World War II trail of Singapore and more particularly, the Kranji War Memorial where remains of Indian soldiers rest. These were the soldiers who defended Singapore and Malaya, fin the World War II....
That sounded interesting, but I realised it would be a struggle to fit in Kranji into my schedule, though I would be visiting the Changi Museum and Reflections at Bukit Chandu.....
As we took a turn on to the North Bridge Road, we were led into a small perfumery that went by the name of Haji V. Syed Abu Thahir Trading - the owner, Abdul peddled his wares - oil based perfumes with fragrances matching the best, e.g. Chanel 5 or Davidoff. 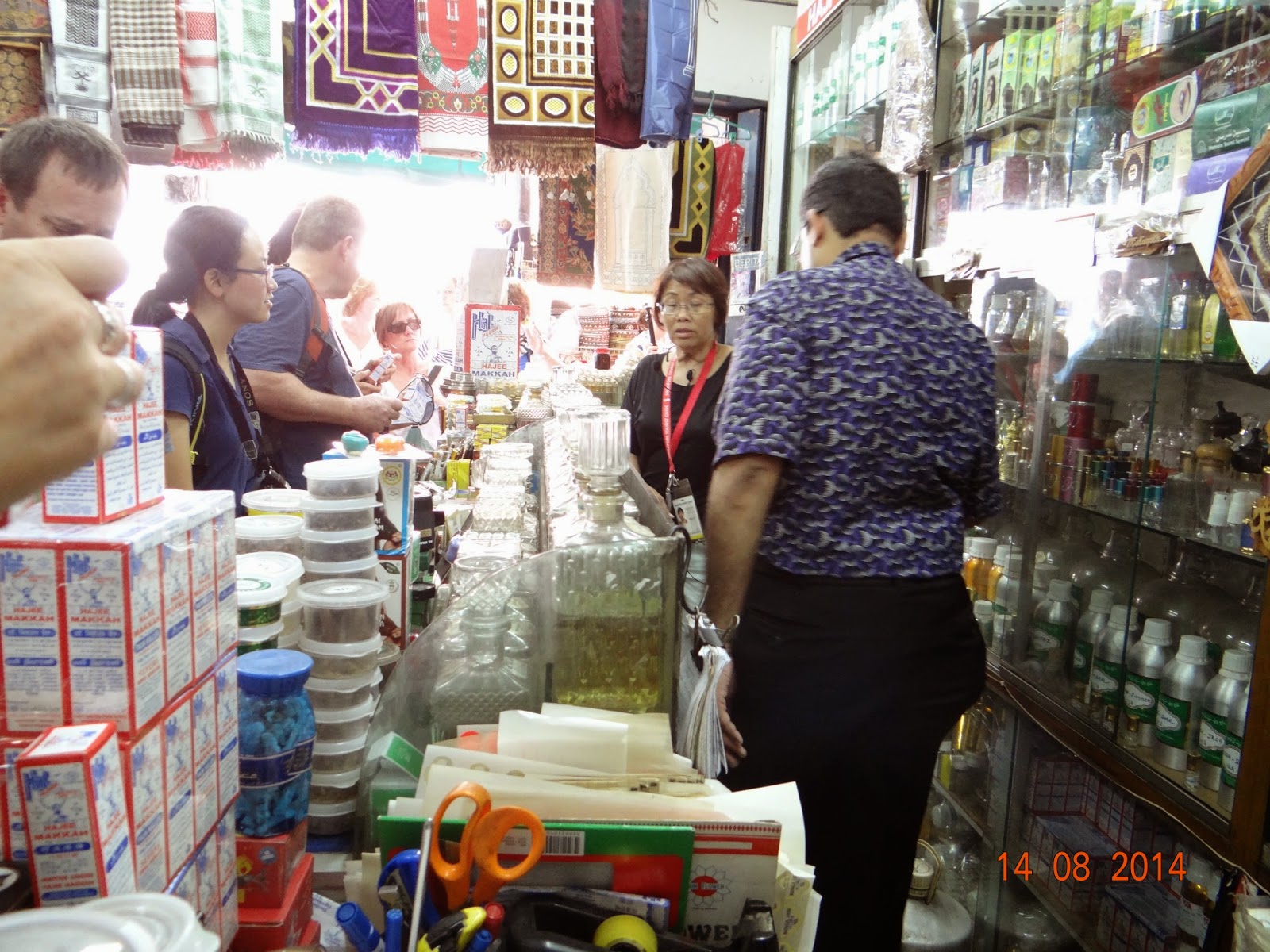 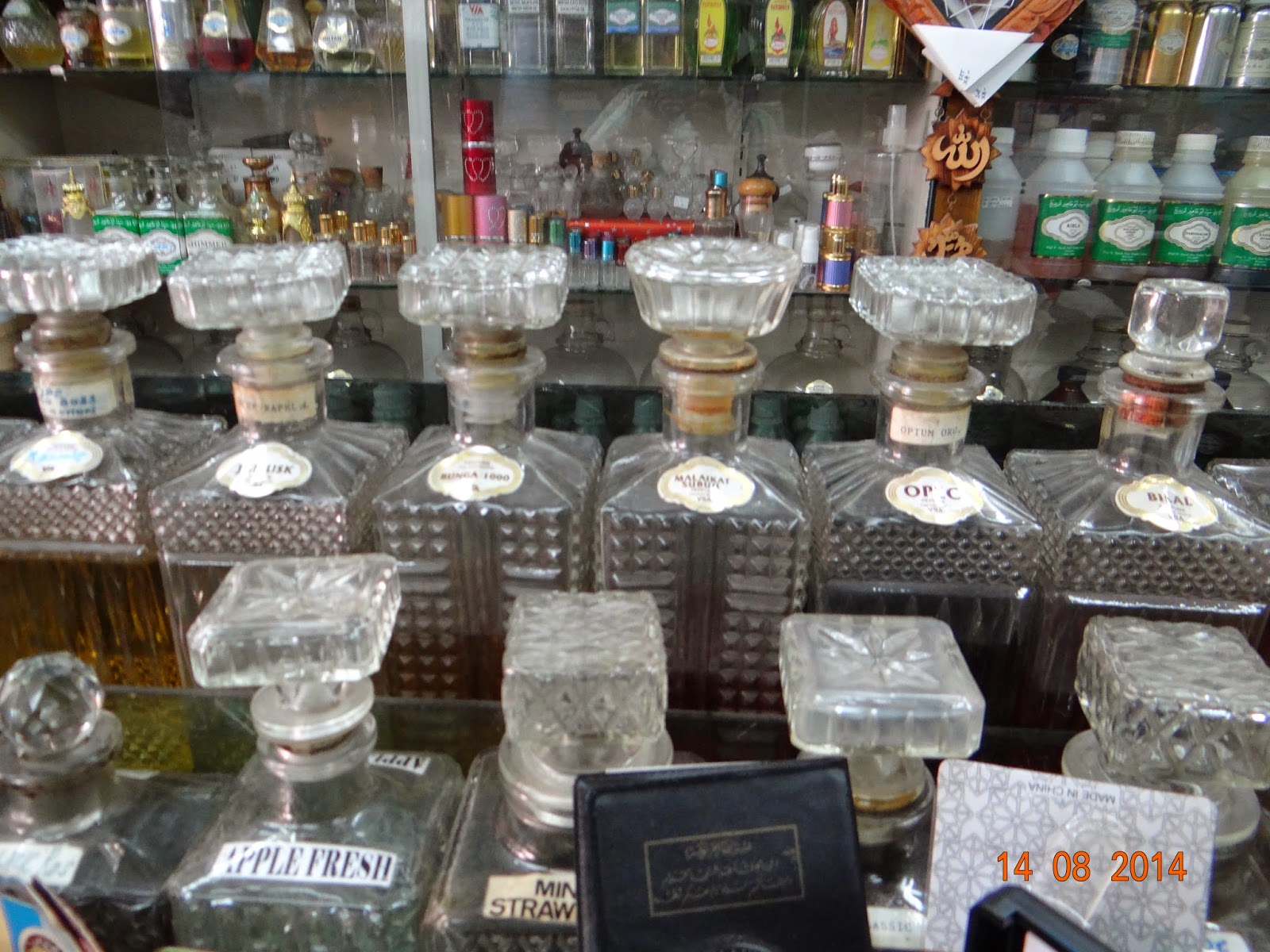 Abdul claimed that his perfumes were oil based as Muslims abhor alcohol and just a dab was sufficient to keep you going for the whole day. I picked up bottle of a multi-purpose oil that promised relief from aches, pains, headaches and sinus. I promised to come back here with Neeti, I know she would love the fragrances here. A brief conservation with Abdul revealed his family was from Trichy, a city I frequented in my frequent Southern Sojourns!
Now this indeed is a small world....
From here we crossed the road and headed to the Malay Heritage Centre, which was once the home of the erstwhile Sultan of Singapore. In its heydays, the place was known as Istana Kampong Glam (or the Palace of Kampong Glam) and Gedung Kuning (or Yellow Mansion), and was part of a larger and much extensive compound that led up to the Beach Road. 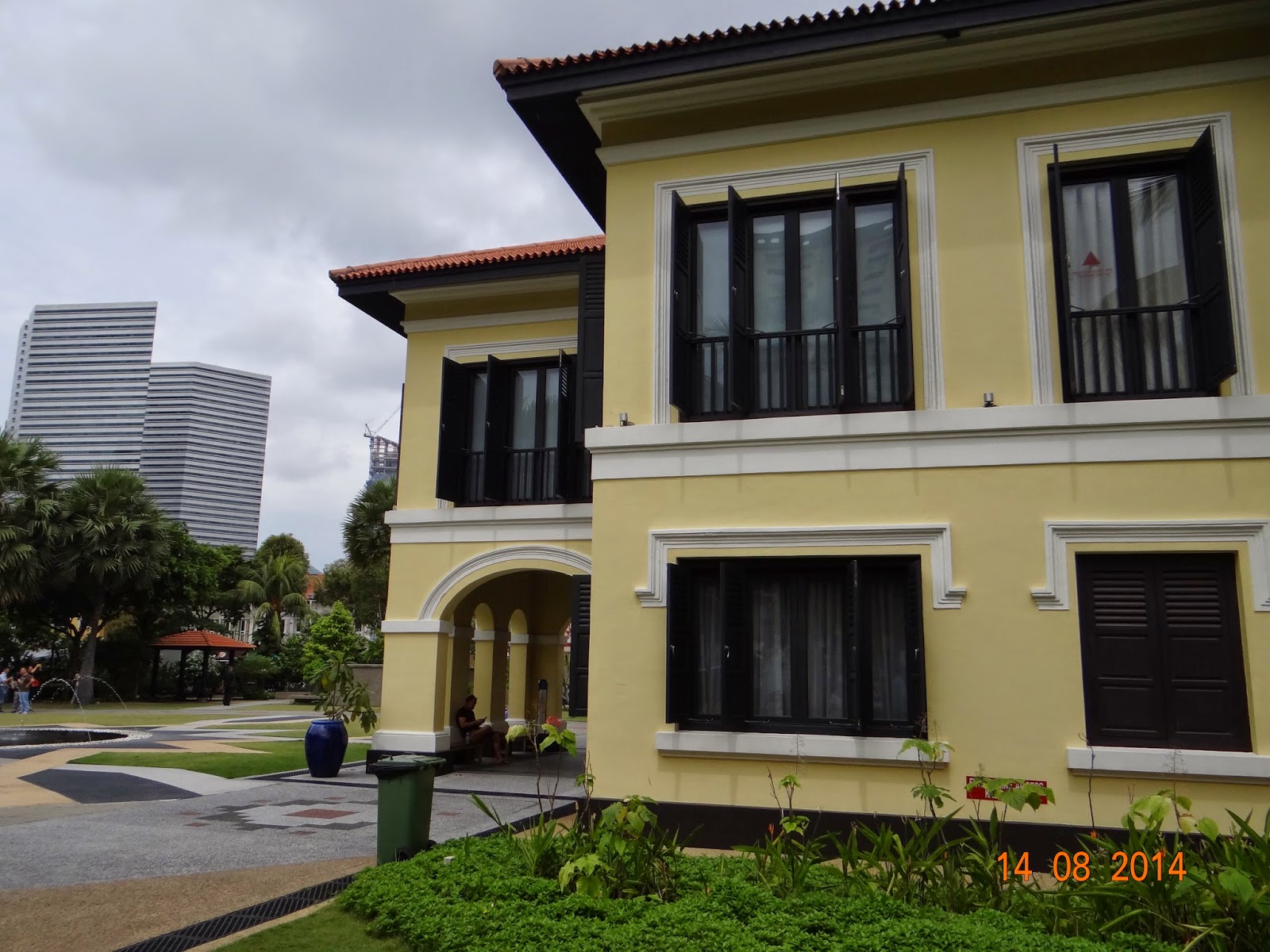 Over here, Geraldine narrated the story of how Singapore came into British hands. In the early 1800s, Sir Stamford Raffles realised the strategic importance of Singapore (spice trade and gateway to China), but in order to control this area, he needed local support to get rid of the Dutch, who already had monopolized spice trade in the region.
Sir Raffles recognised the crown prince of Johor, Hussein Shah, from whom the throne had been usurped, as the rightful heir to the throne and promised him a princely amount of Spanish $5,000 annually in return for exclusive rights for the East India Company to trade in Singapore.
And then a series of machinations and deceits resulted in the British taking complete control of Singapore and Malaya, while the Dutch receded to Sumatra. The Sultan Hussein Shah was reduced into being a pawn in the hands of the British, and in return for money, Singapore was ceded as a crown colony.
The rest is history....
But the descendants of the Sultan stayed on in the Istana Kampong Glam, which by the 1960s and 1970s was in shambles. The government, later, acquired the property and converted it into what is known as the Malay Heritage Centre today.
The descendants of the Sultan today live like common Singaporeans, they live in public housing and use public transport, but they have only one privilege - they are given the title Tungku,  which denotes royal lineage in Malay.
As we proceeded, we passed by an Arab school established in the early 1900s by the wealthy Alsagoff family. This was an Arab business family that migrated to Singapore from Yemen in the late 1800s. The school was set up to preserve their cultural island in the island.
Our next halt was at the old Malay cemetery which had catered all this while to the descendants of the Sultan - the Tungkus and their trusted staff. The cemetery was ill maintained and shabby with an overgrowth of trees and vegetation. Geraldine wondered how long the cemetery would survive before it is acquired by the state for construction..... 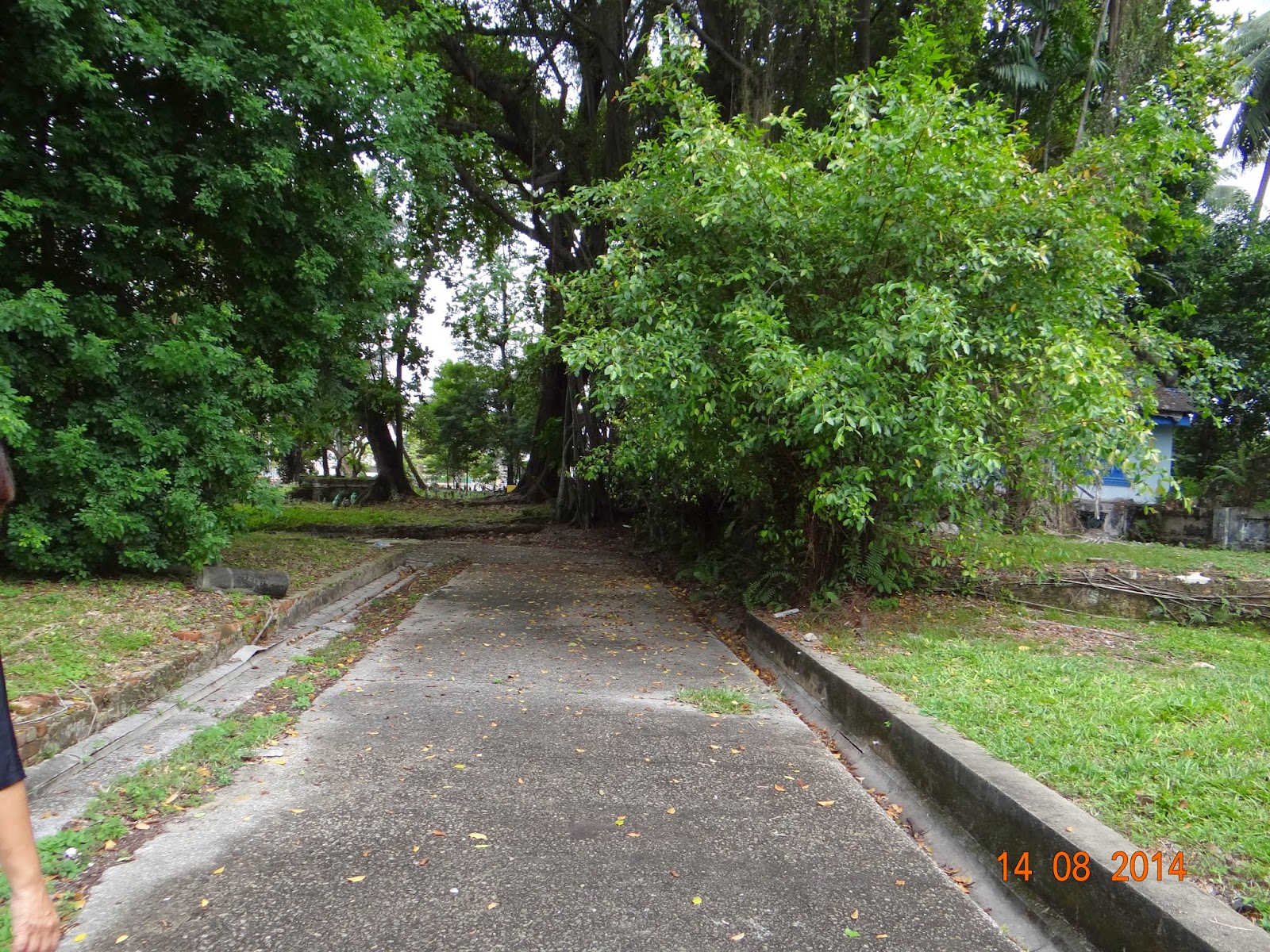 And there ended our tour of Kampong Glam, the area where the history of modern Singapore played out between the British and the Malays.....
Posted by Rajeev at 11:40 AM