Today is my third day in Singapore. Unlike yesterday, I was a bit more disciplined. I woke up on time. After getting ready, I headed to the Balestier Food Market. Only three food stalls were open - the kopitiam in the centre of the market, the roti-prata stall and a Malay rice and gravy stall.
It had to be a traditional Singaporean breakfast for me today, so I headed to the kopitiam. A kopitiam is the Hokkien term for coffee shop - kopi (coffee) and tiam (shop). Today, kopitiam is a word accepted in Malay and Singlish dialects. 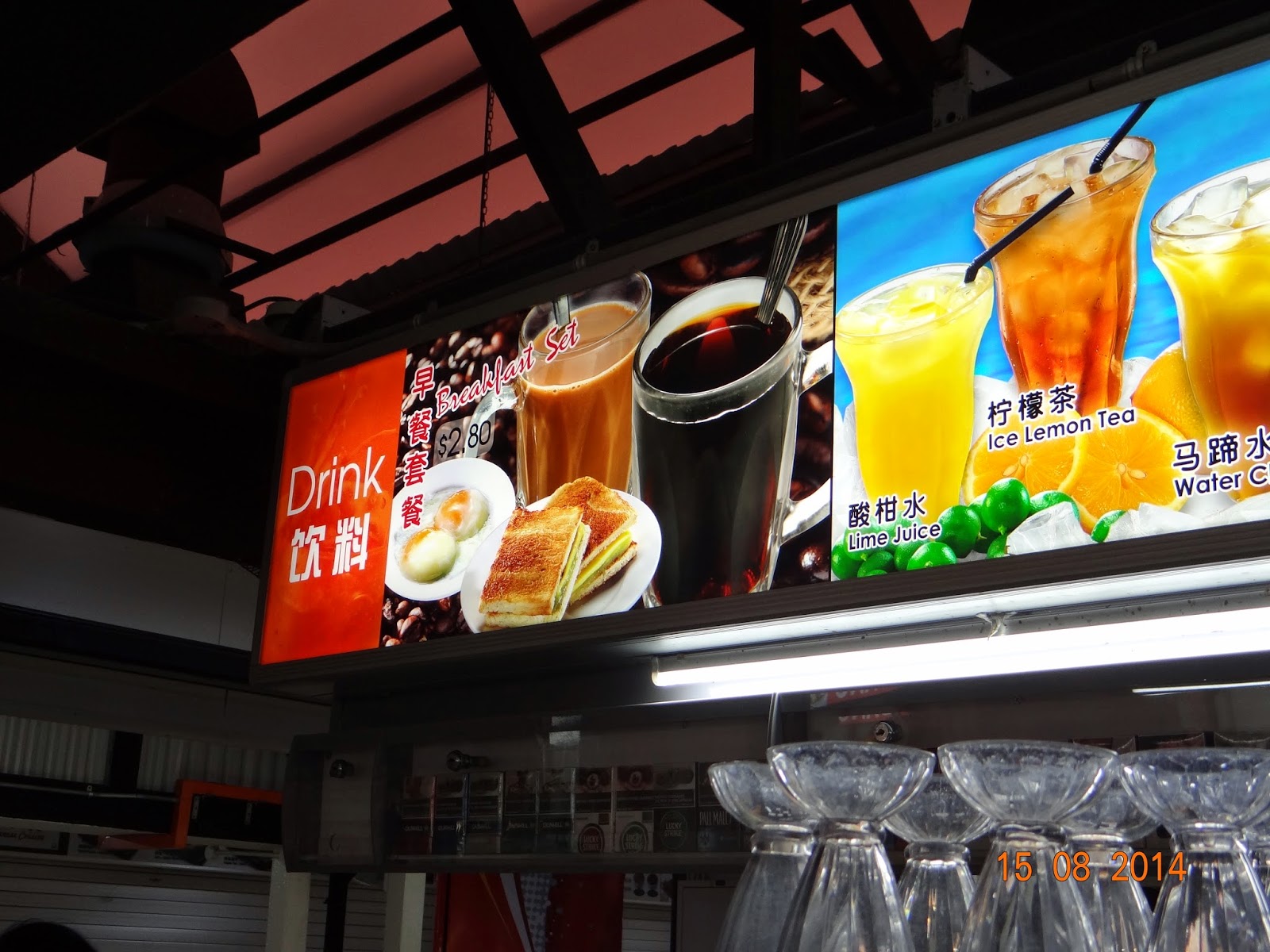 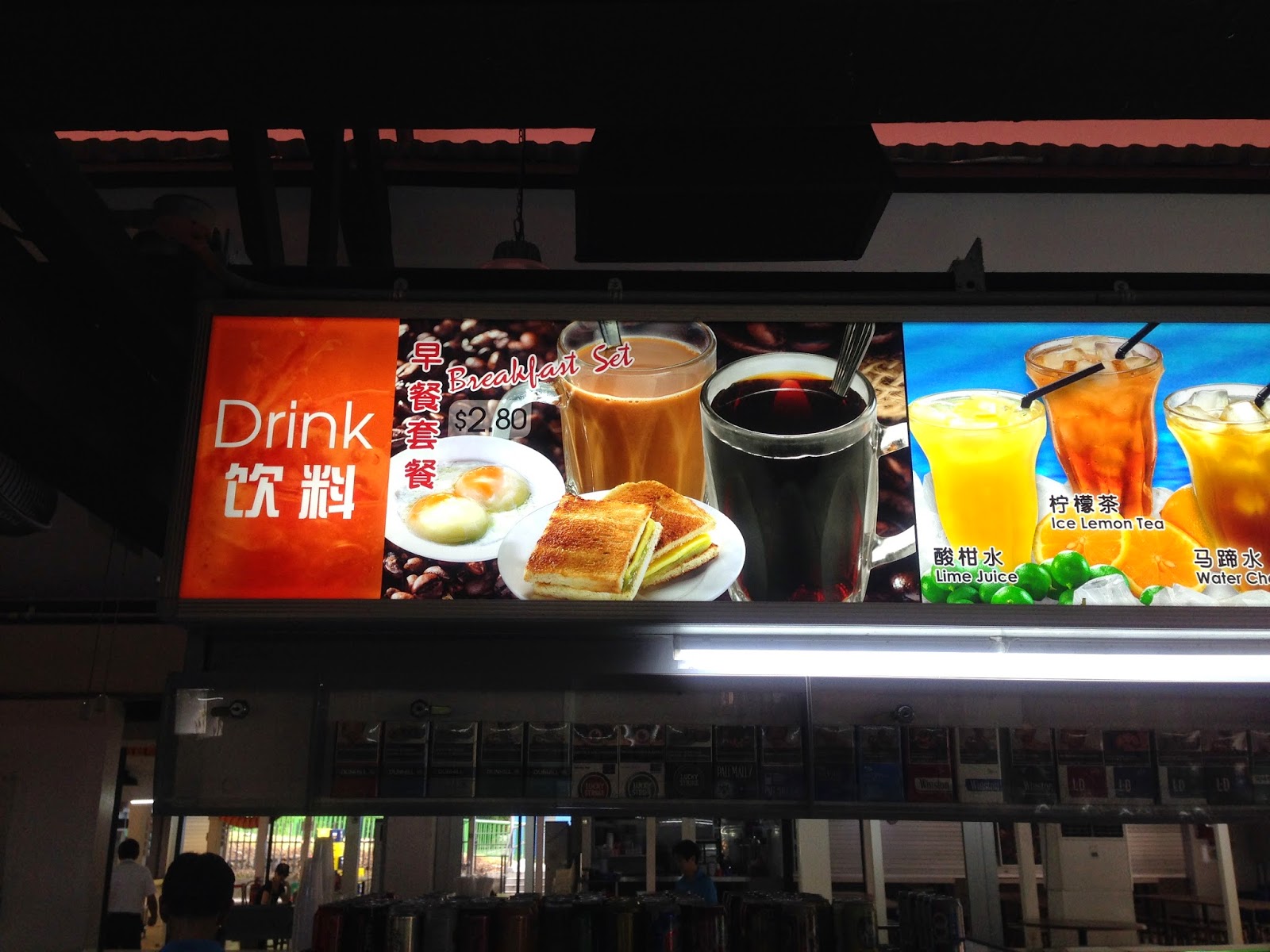 The kopitiam was manned by two ladies, both are Chinese. The billing was managed by the young lady and the elder one, presumably the mother of the younger one prepared the eggs and beverages.
I went in for the classic Singaporean breakfast, what they called the "breakfast set". For SGD 2.80, the "breakfast set" included two soft boiled eggs with soya sauce, two thick toasts slathered with thick layers of butter and kaya and kopi on the side.
(In all my travels, within India and abroad, I have come to realise that being bohemian when it comes to food does pay off - not only is the local fare cheap, fresh and hearty, it does provide an incredible new vista, an insight into local life. Had I stuck to traditional North Indian fare, it would have been difficult to find early in the morning, it would have been incredibly expensive as well... Also my hotel breakfast buffet was SGD25, I was happy to save that money!)
Kaya toast, a local favourite is credited to the Hainanese immigrants who came into Singapore in the 1800s and early 1900s. Many of these Hainanese worked on British ships as kitchen hands. When they settled in the British colonies now constituting Singapore and Malaysia, they started selling the foods which they prepared for the British, including coffee, toast, and French toast, to the local population. They substituted jams and preserves with native coconut spreads - obviously that was cheaper and there was an abundant supply of coconuts.
This is the way Kaya was born. Kaya (also called Srikaya) is a sweet creamy coconut spread made from coconut milk (also known as santan), duck or chicken eggs which are flavored by pandan leaf and sweetened with sugar. The colour of the kaya varies depending on the colour of the egg yolks, the amount of pandan and extent of caramelisation of the sugar.
My order was ready in 5 minutes flat. Two eggs were put in a bucket of scalding hot water and covered with a saucer. The old lady probably understood that this was my first time with kaya toast and she shouted out precise instructions in shrilly tone - fhive mineet lah, gesticulating, waving with her hand, showing me five fingers. 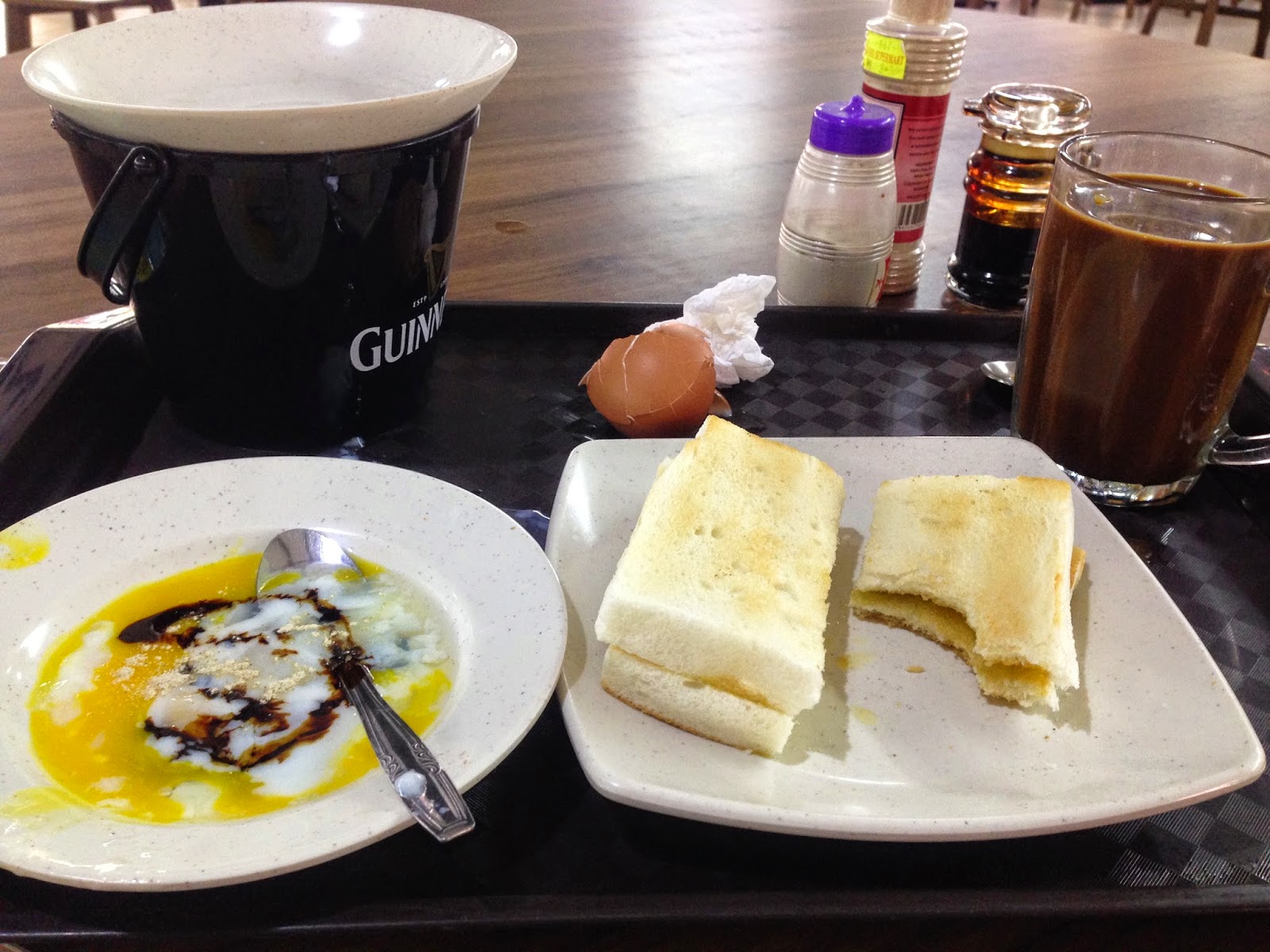 In just about 5 minutes, I cracked open the eggs and all the gooey, eggy goodness flowed on to the saucer. I poured some soya and sprinkled some pepper. The kaya that was spread on my toasts was greyish-green and had a paste-like consistency.
Nirvana it was when I took the first bite. Soft boiled eggs taste incredible with soya - that was a revelation!And the toasts tasted yum, they went very well with the soft-boiled eggs with soya and pepper. It was a sensory explosion attacking and tingling my tongue - buttery sweet toasts, the eggy-sour-spicy eggs and bitter coffee. 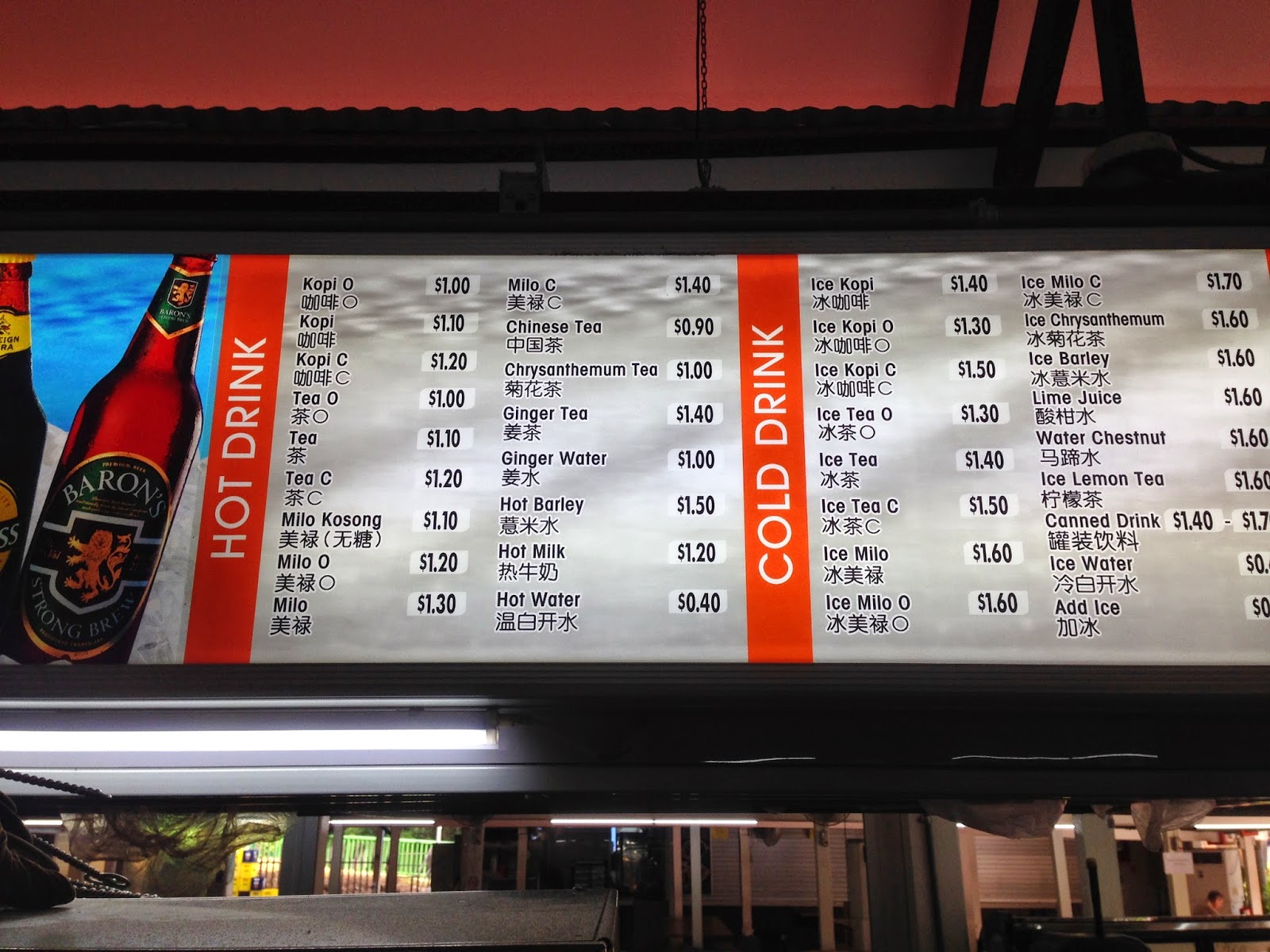 Now the coffee was a bit of a struggle. It took a while to figure what a kopi-o was and what kopi-c was. That's exactly when Wikipedia came in handy - I accessed a glossary of kopitiam terminology on my mobile:
Happy to have deciphered the culinary "enigma code", I explained to the elderly lady that I wanted a kopi-c. The bitter-sweet kopi-c gave me an instant burst of caffeine to get me going, that's exactly what's needed before a long day. This was the first time I had coffee with condensed milk, to tell you the truth, it wasn't bad at all.....
After getting all wet at the Botanic Gardens, I needed a hot spicy meal. The food stalls at the Singapore Flyer, branded as the Singapore Food Trail, were all very tempting. I spent 20 minutes doing a recce of all stalls. 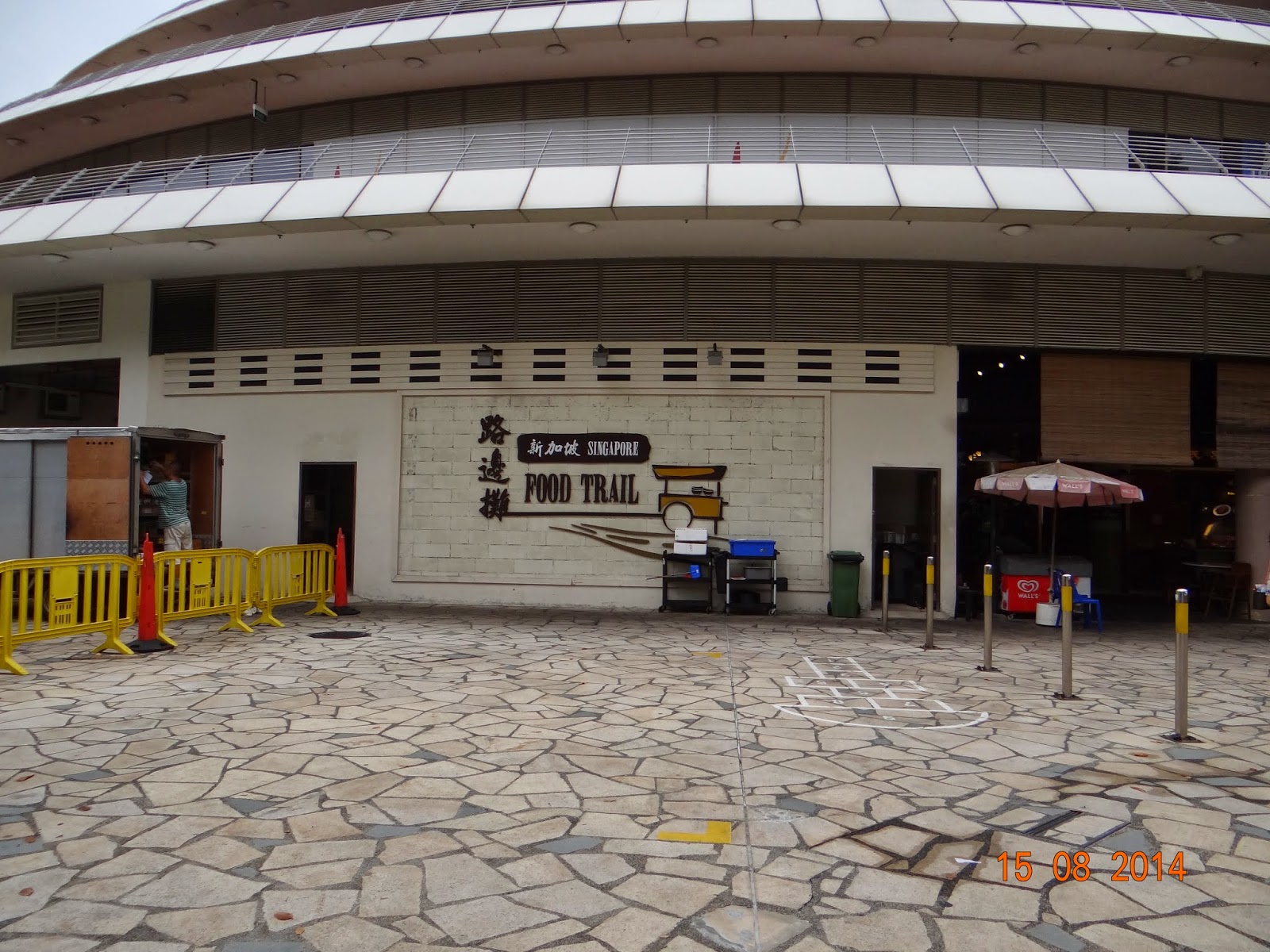 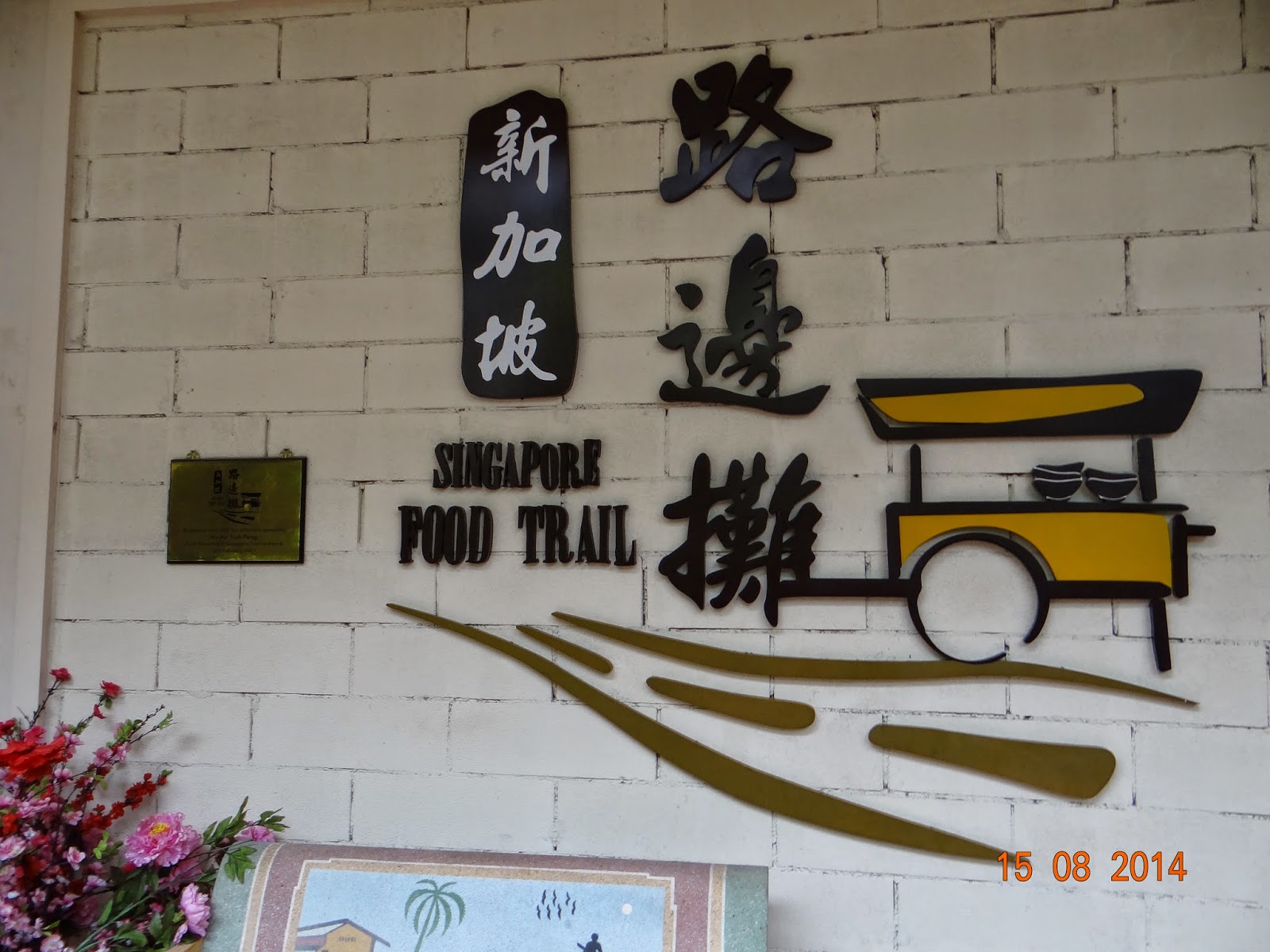 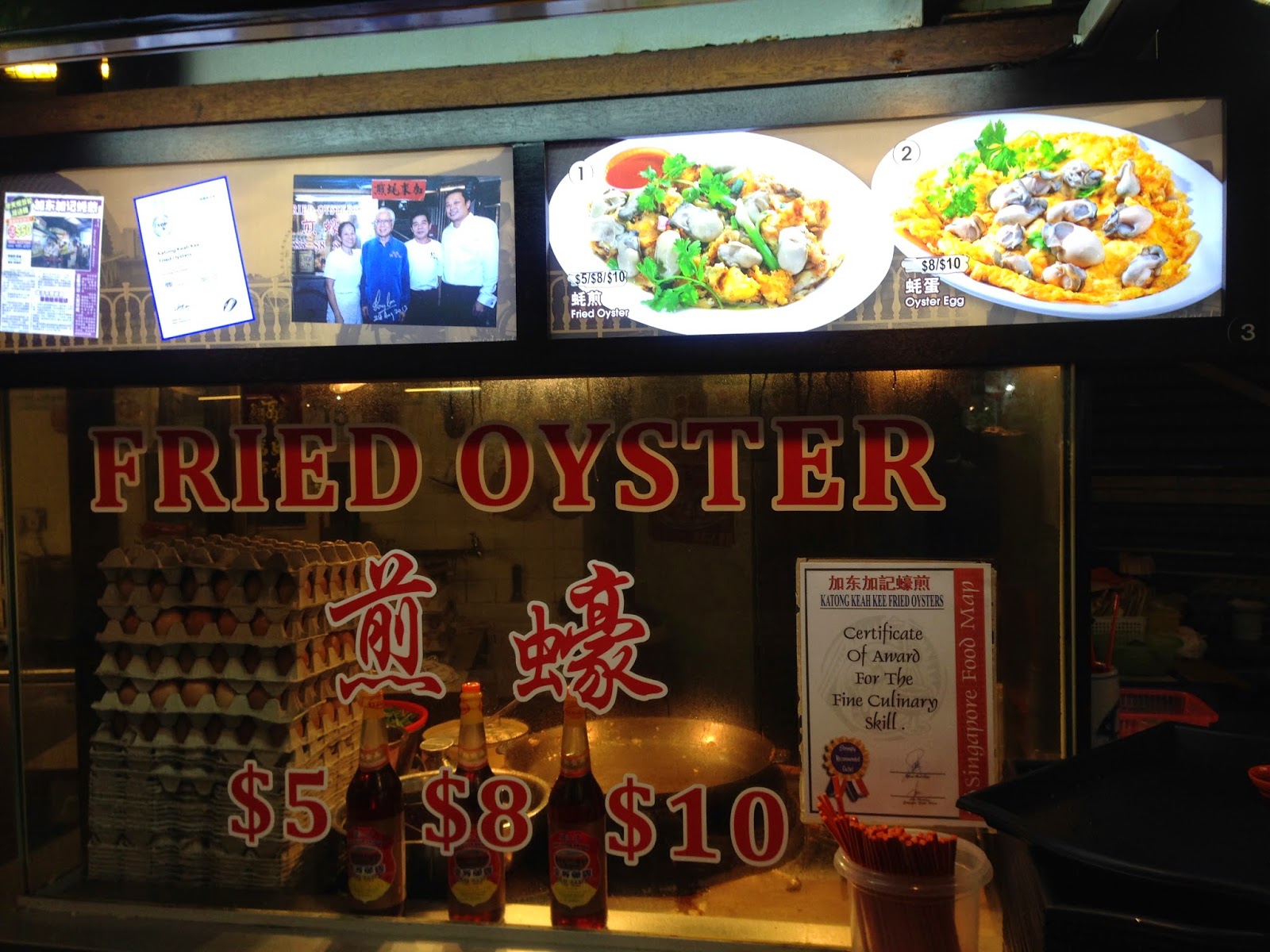 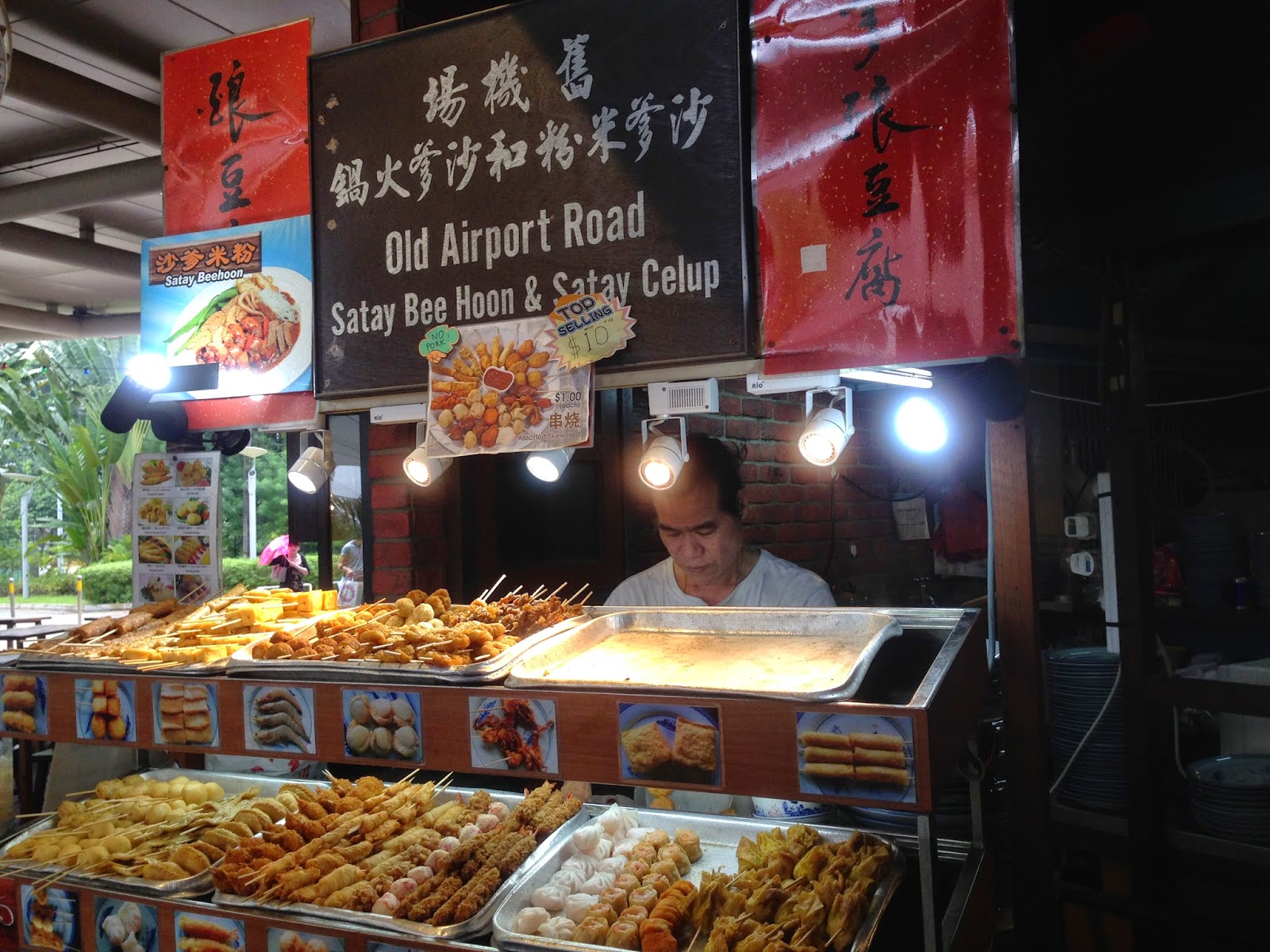 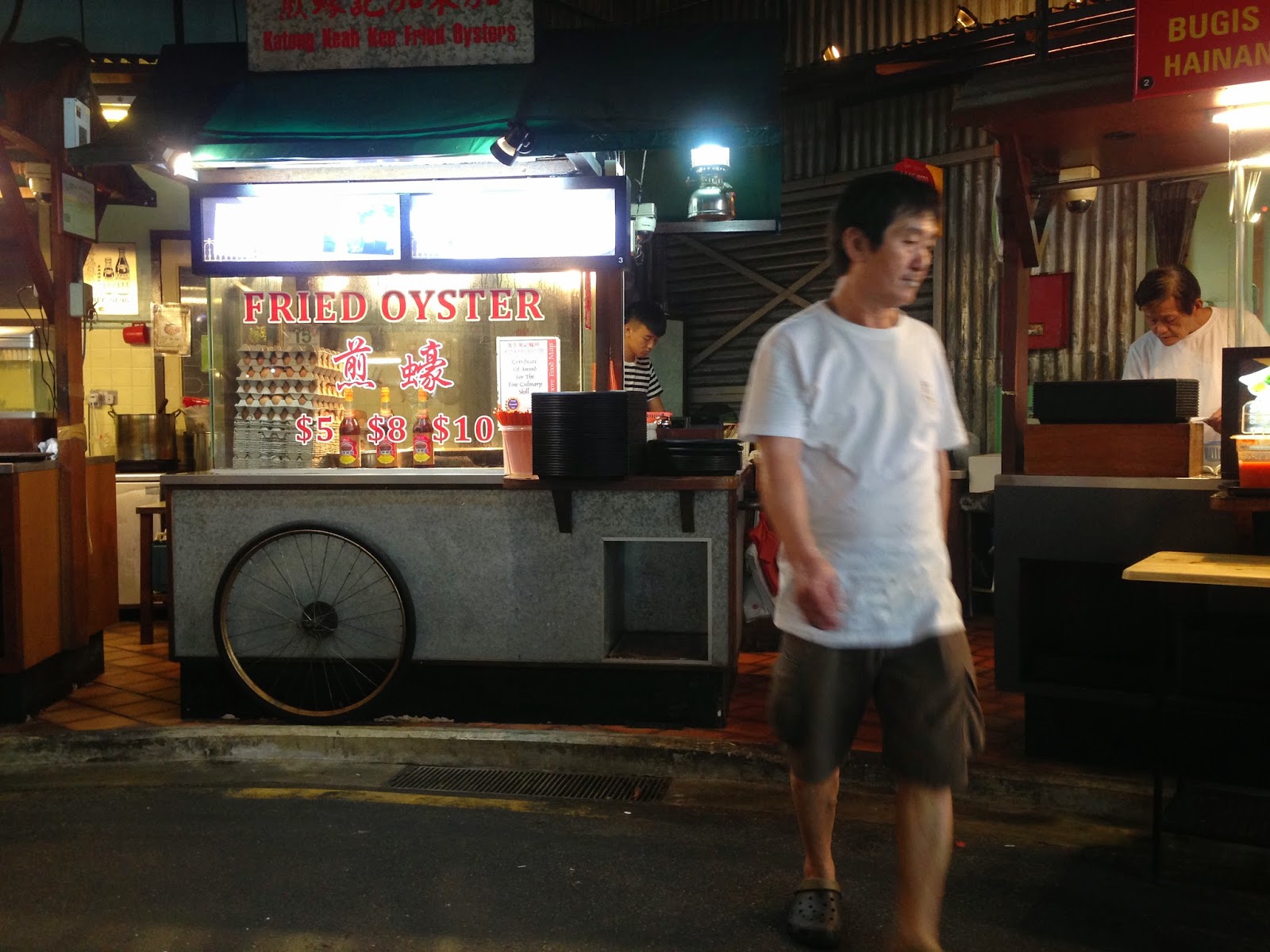 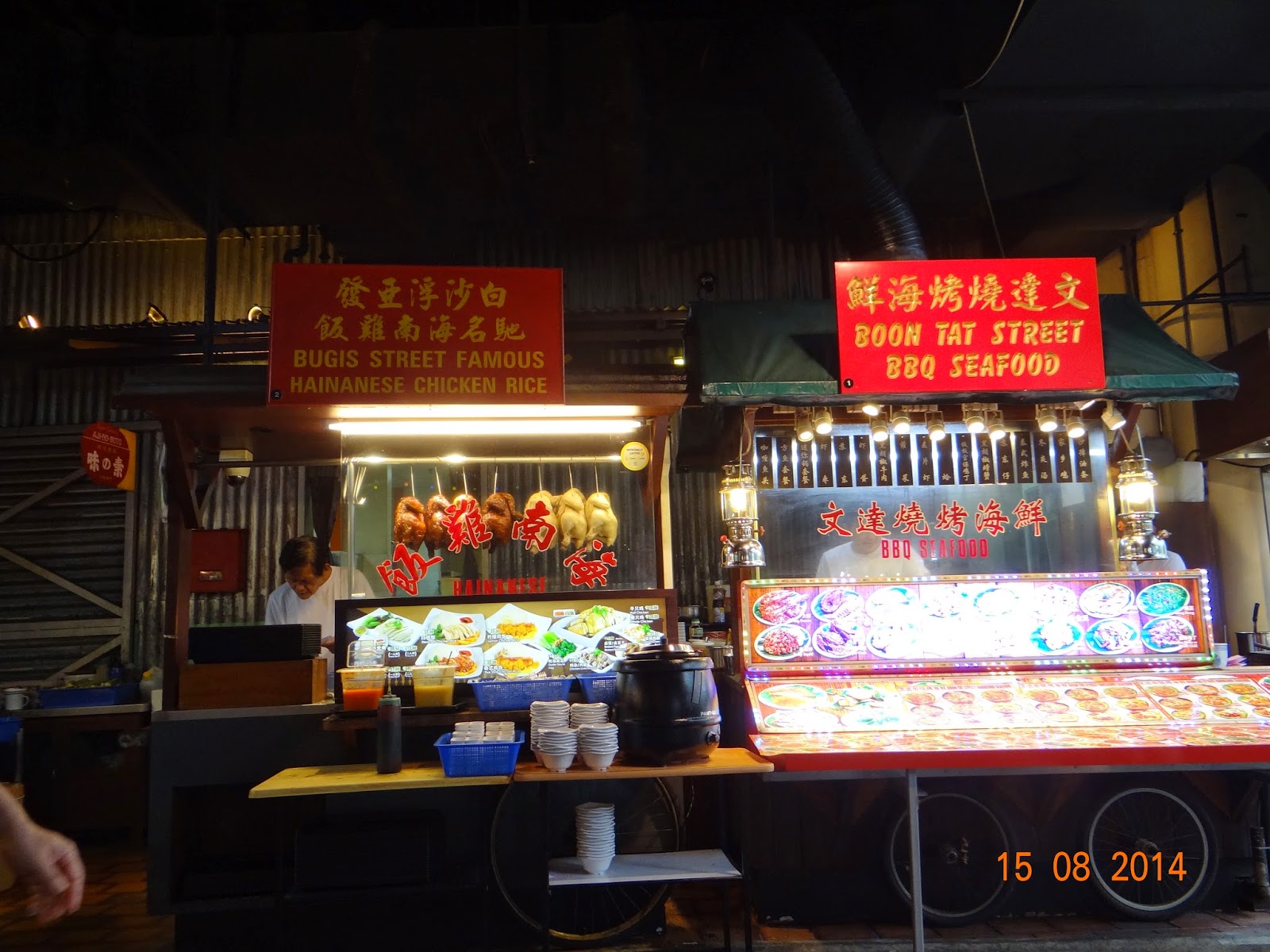 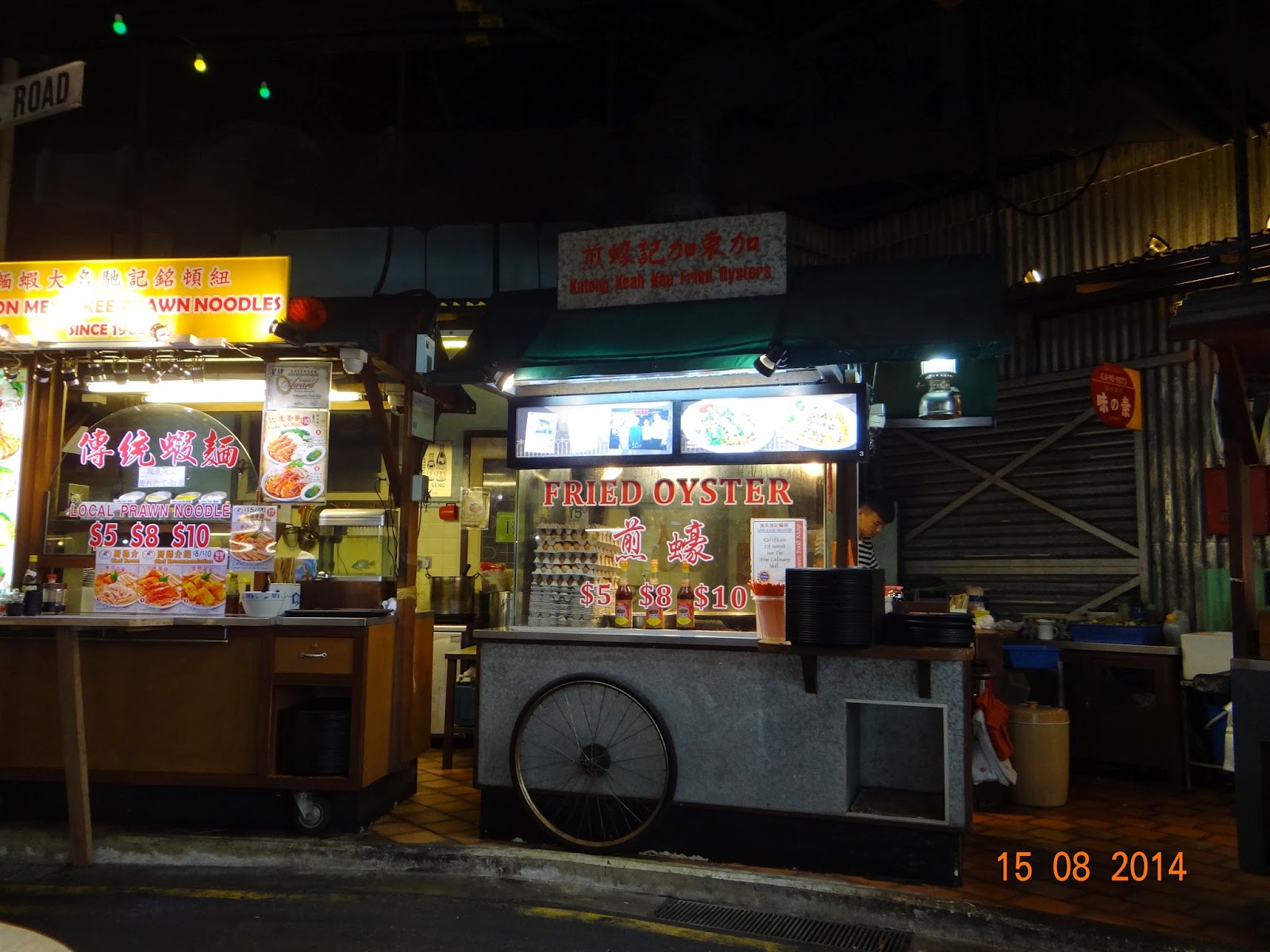 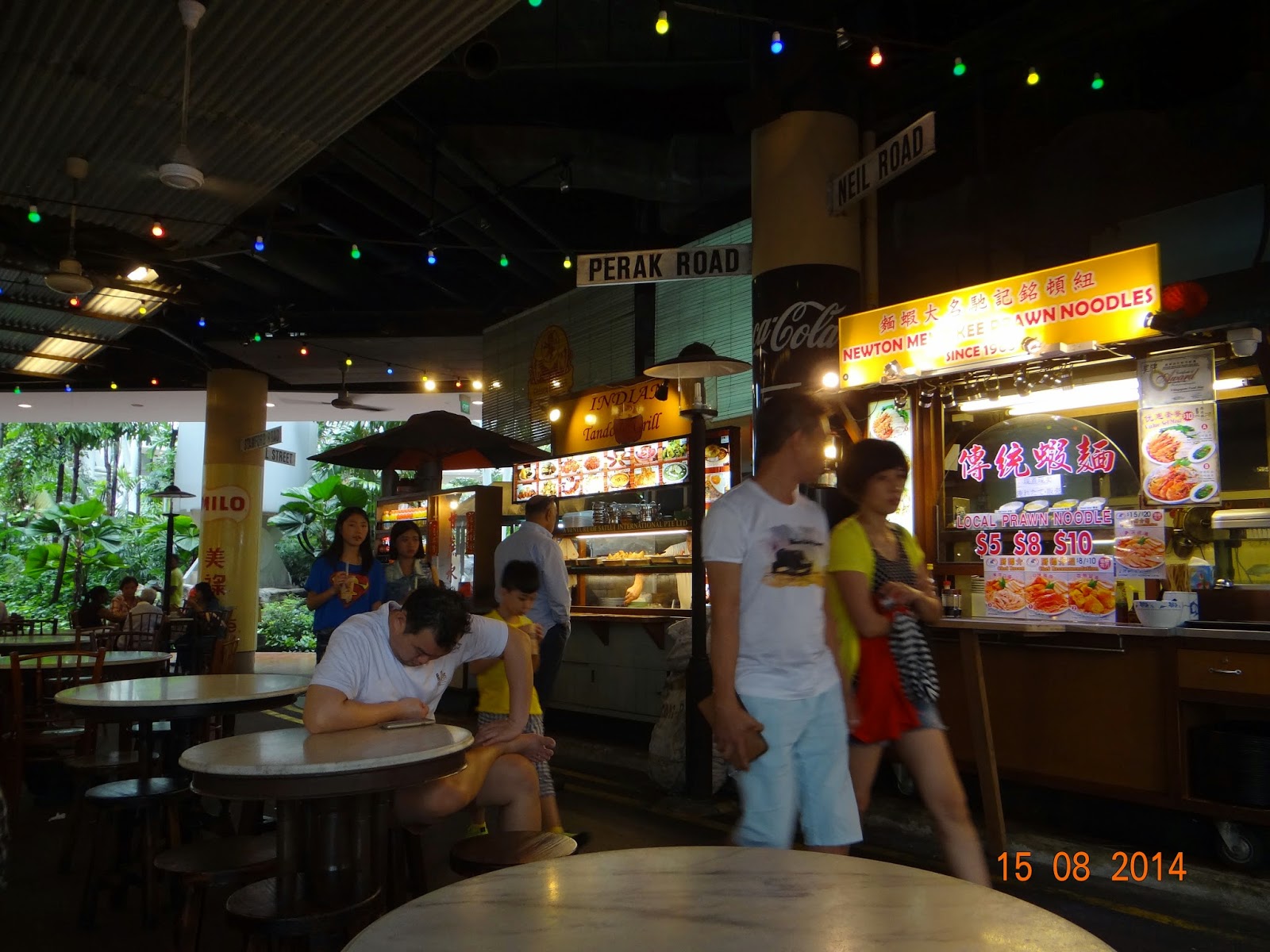 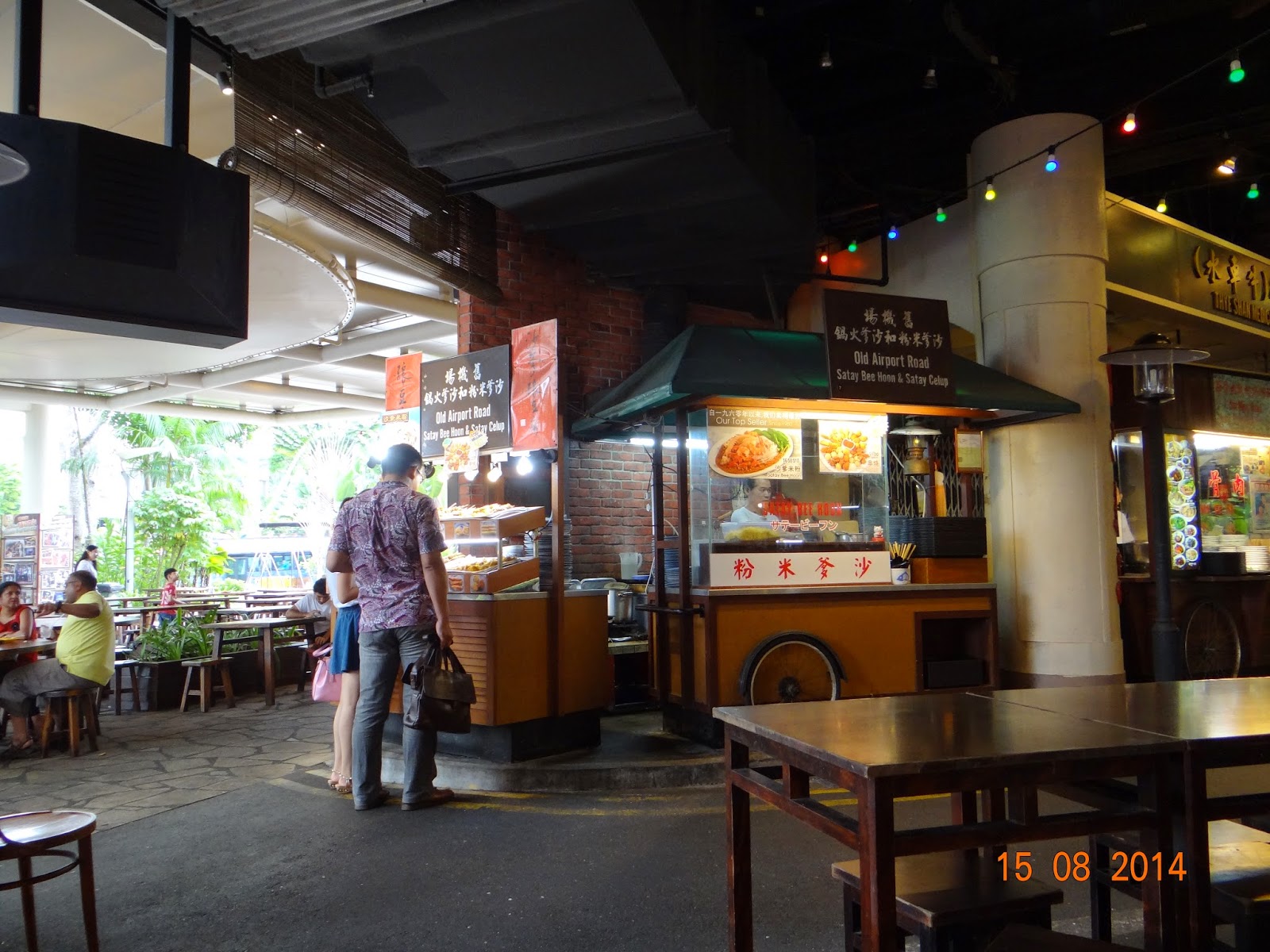 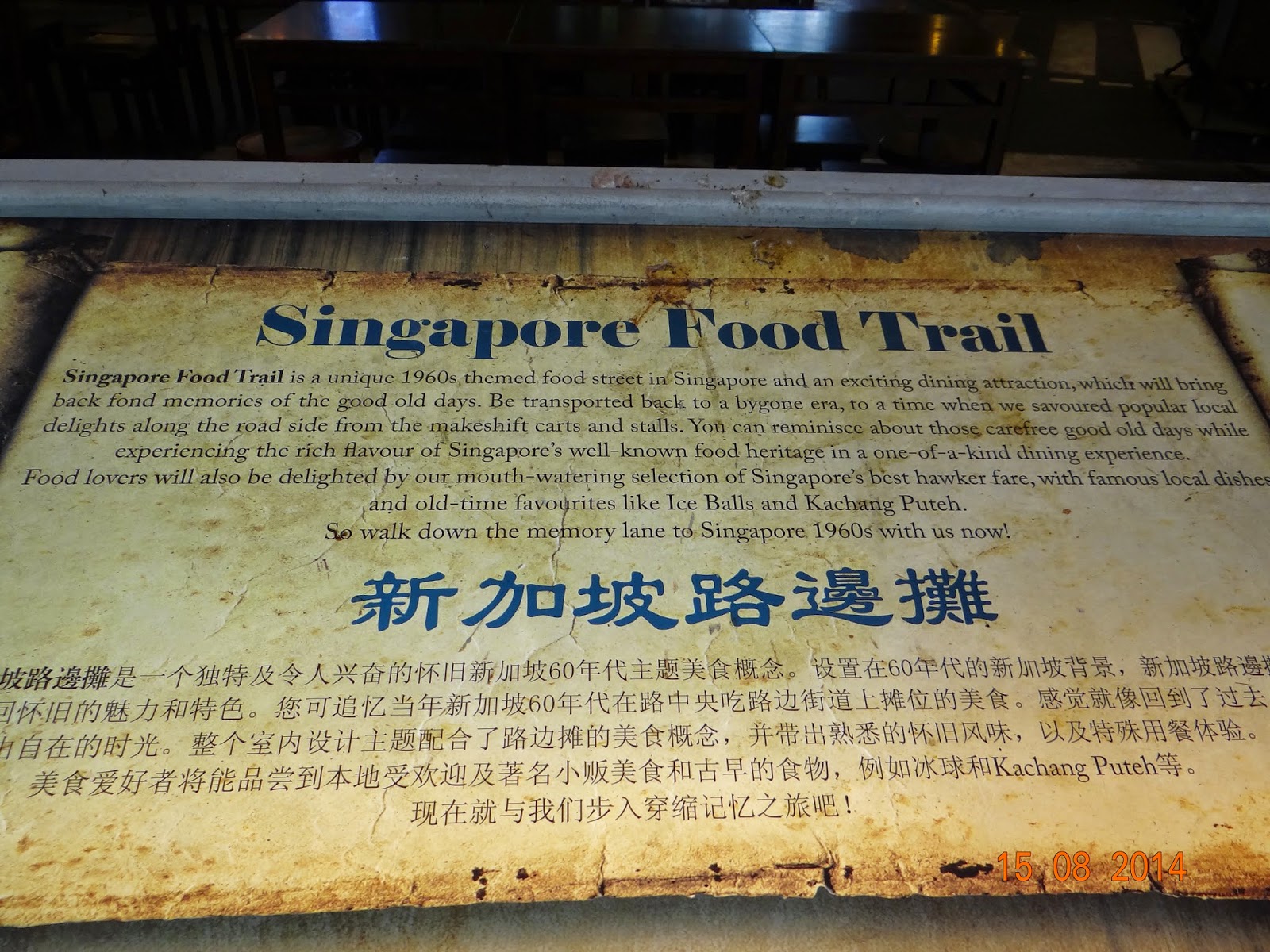 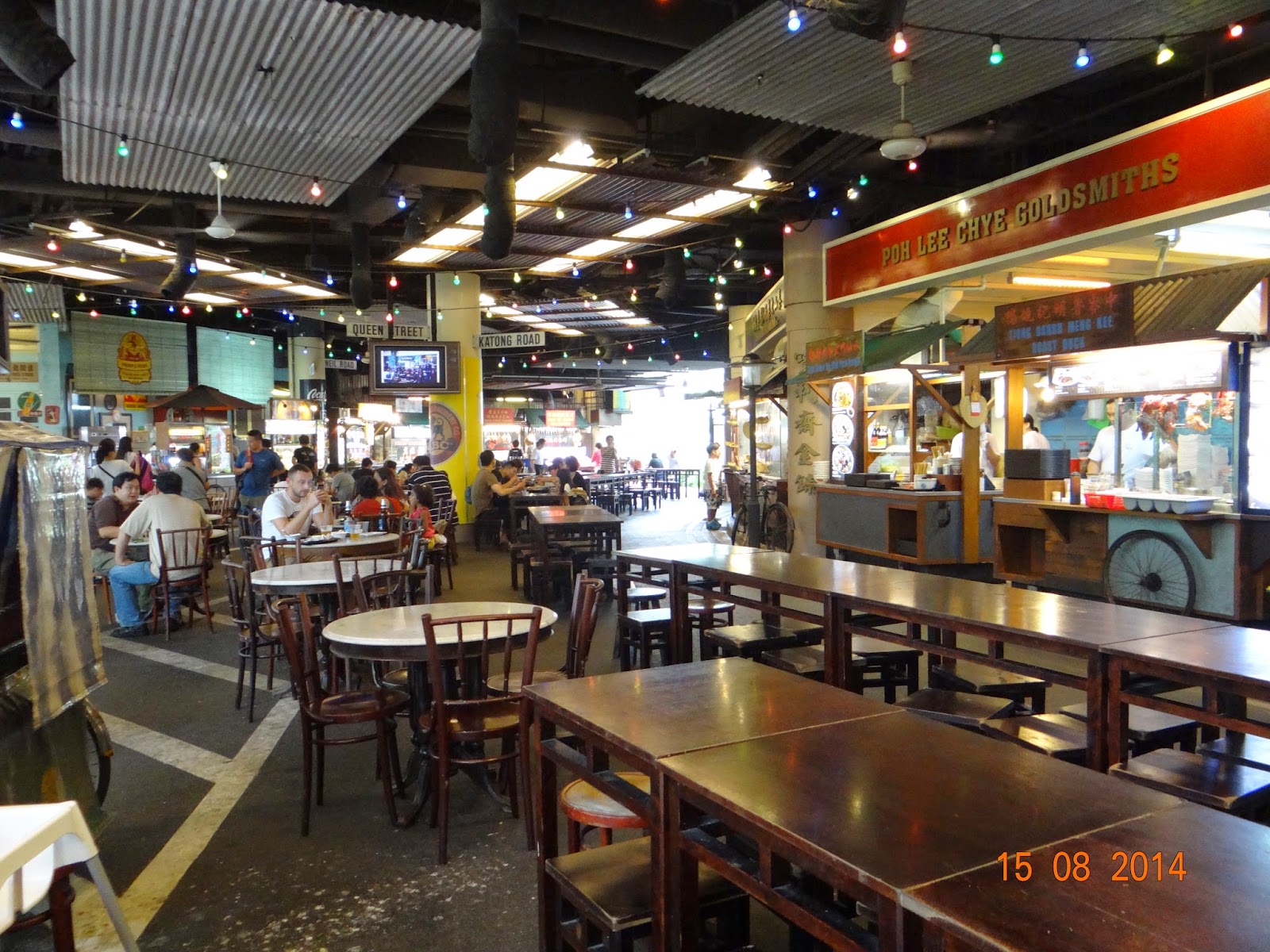 It was quite late, nearly 1500 hours, so I first settled for some satay - chicken, chicken wrapped in sea-weed and fish. Trust me, I have had better satays in India, the ones here were just too oily. But the sauces were exquisite - spicy and tingly. 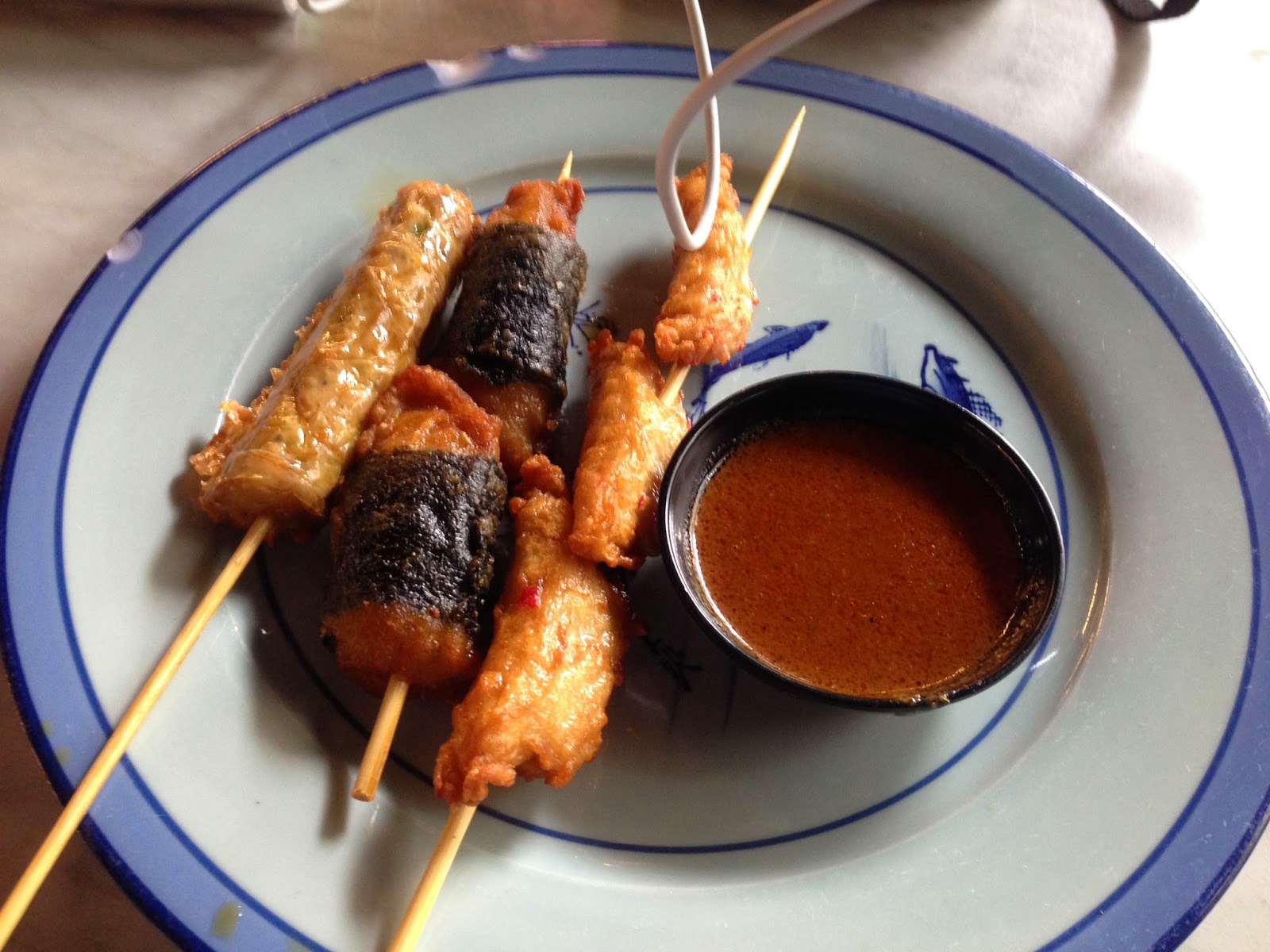 Then I found what I was looking for..... orh-luak(!), the legendary oyster omelette that I had been wanting to have for a few years now.....
But there was a problem. There was a young lad manning the store and he didn't know a word of English. My effort of explaining that I wanted orh-luak seemed to be going in vain....
Eureka!
Oh yes, out came my phone, I Googled for a transliteration of orh-luak in Chinese characters.... The lad still did not understand, I suspected he didn't know how to read. There was a juice stall next door - the elderly Chinese owner noticed that I was struggling to communicate. He walked over and offered to help!
Thank God he knew English, he understood what I wanted and explained it to the lad.
I thanked the elderly Chinese. He beamed with pearly whites and croaked No prollemmm la....
Finally, my orh-luak was on its way.... The three-year wait was culminating in Singapore and it was a very special, warm feeling, it was the elderly gentleman, the good Samaritan who made it happen for me! 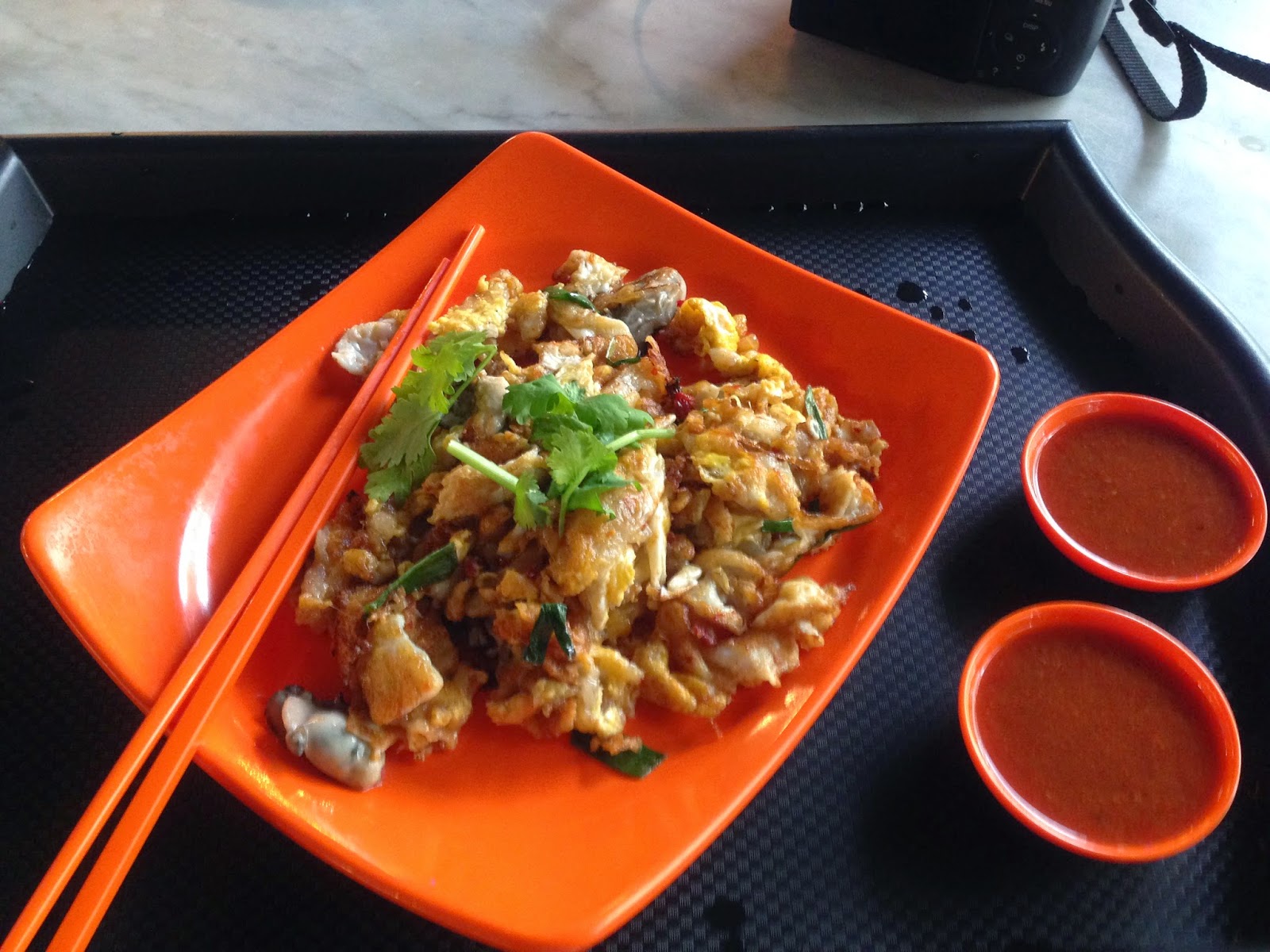 I tweeted my orh-luak photos and I instantly got a response from my friend, Kapil, who hoped I had enjoyed the delicacy (I had bothered him for the orh-luak at Amoy Street Food Centre yesterday!).
After my lunch at the Flyer, I noticed that there was an outlet of Ya Kun Kaya Toast, serving the same yummy kaya toast that I had eaten this morning. I first heard about Ya Kun when I was planning my food trails for the Singapore visit. I am pretty sure Ya Kun would have an interesting history of its founding, which I'll have to figure out.... 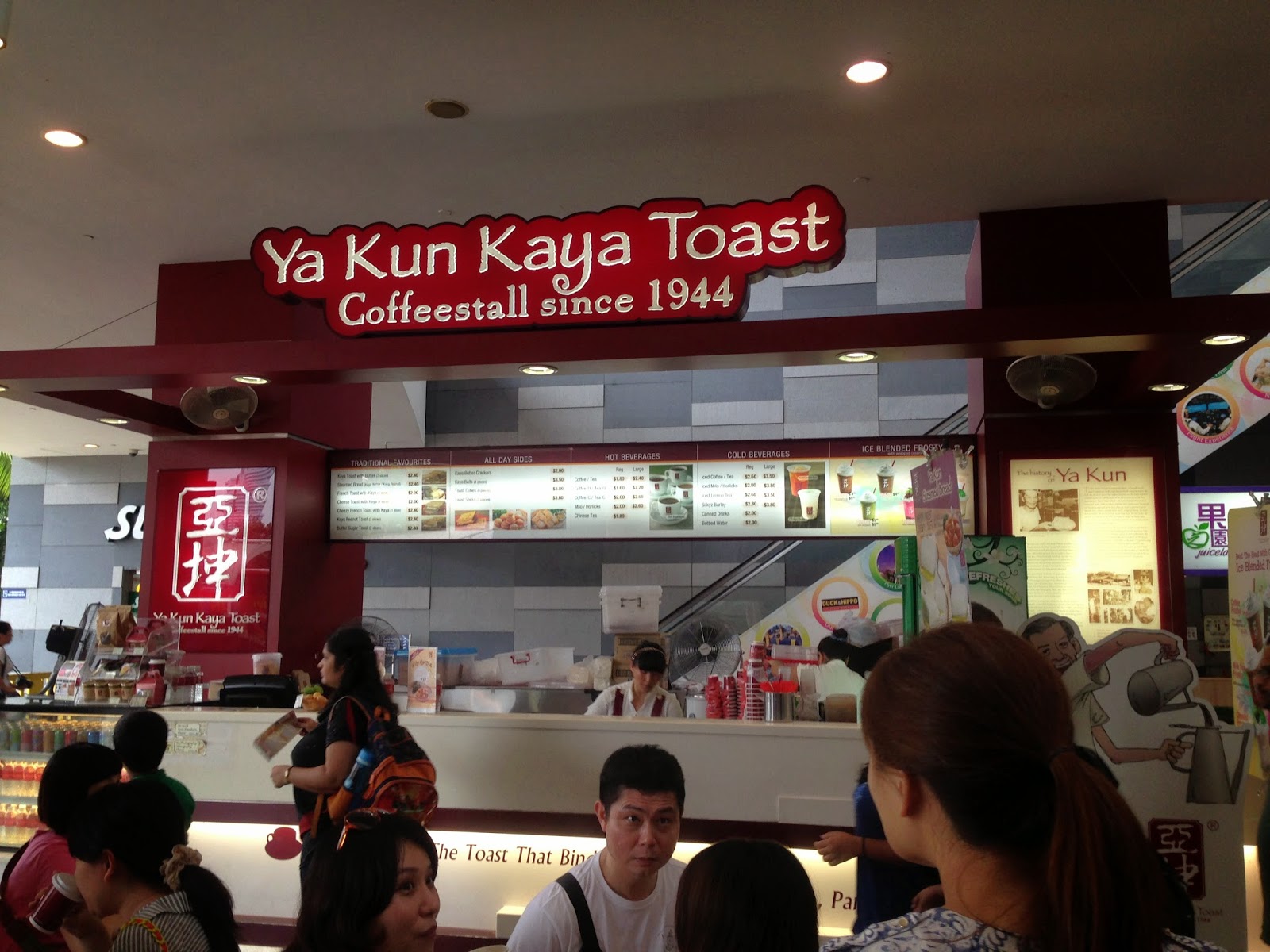 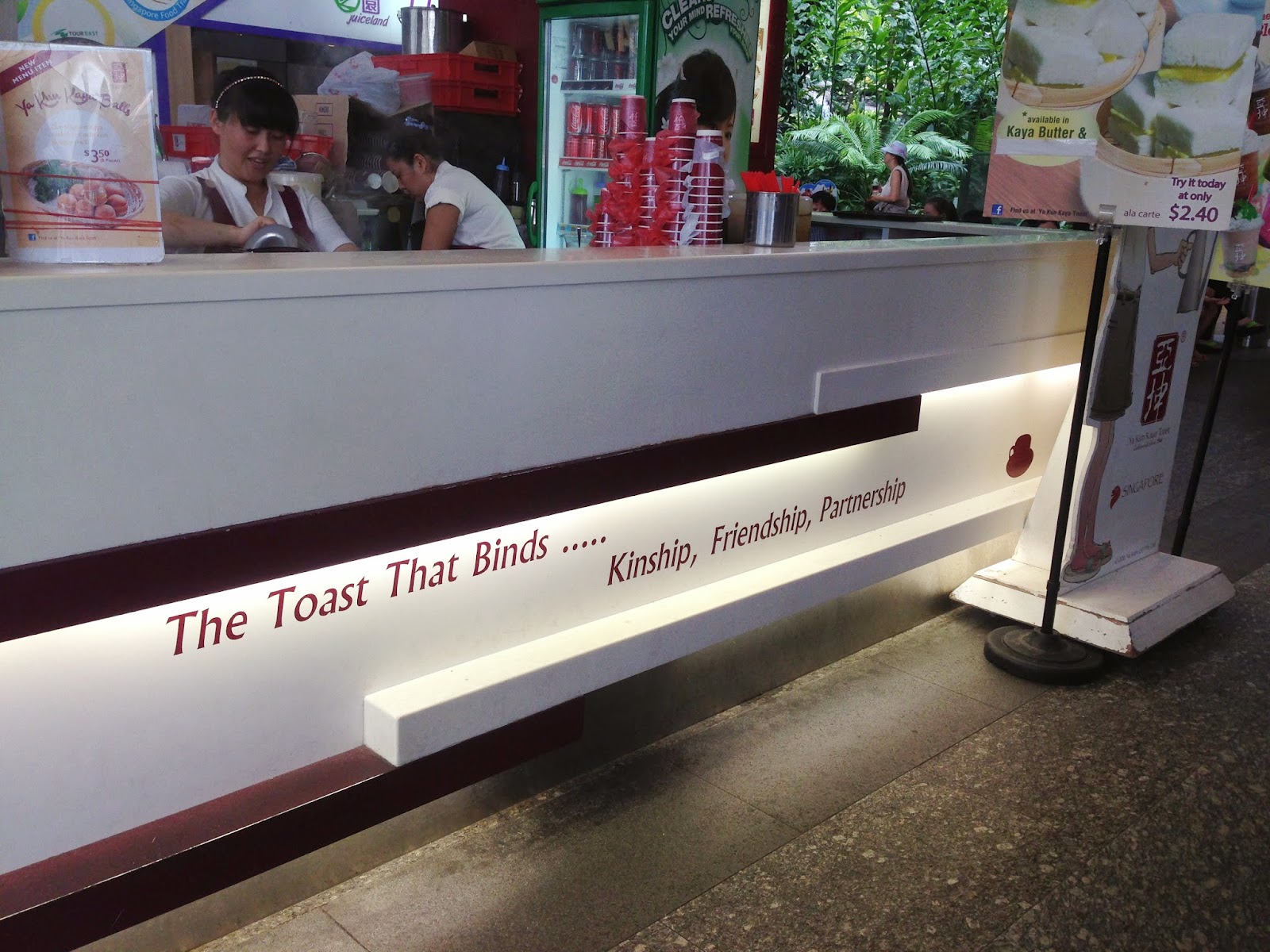 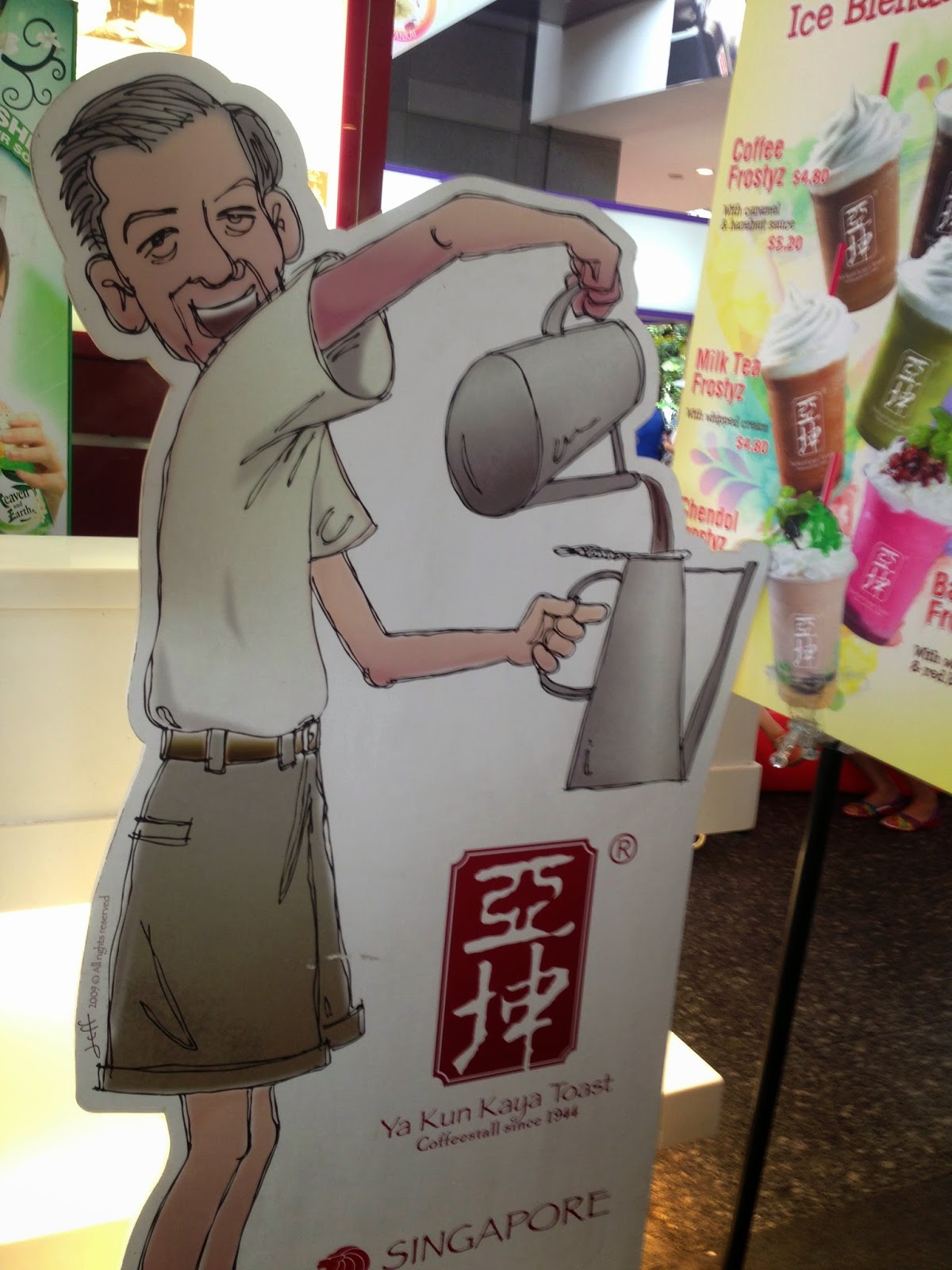 Later in the evening, I was roaming around in Chinatown, when I turned into the Sago Street, also known as the Street of the Dead. The street received its name because during the 1840s, there were numerous sago factories on the street. In the late 19th century, the area was infamous for its brothels. In the later part of the 20th century, the brothels vacated Sago Street and the shophouses underwent  a restoration. The street evolved into a pedestrian street. The funeral parlours located nearby are the reason that the street is always referred as sei yang gai or "street of the dead" in Cantonese.
Both sides of the street were lined with shops and stalls selling clothes and souvenirs. One shop caught my attention - it was a sweet shop selling mooncakes, which are gifted to friends and family during the upcoming Autumn Moon Festival. Mooncakes were a little beyond my budget, but they also had ice cream - durian and pandan ice cream. 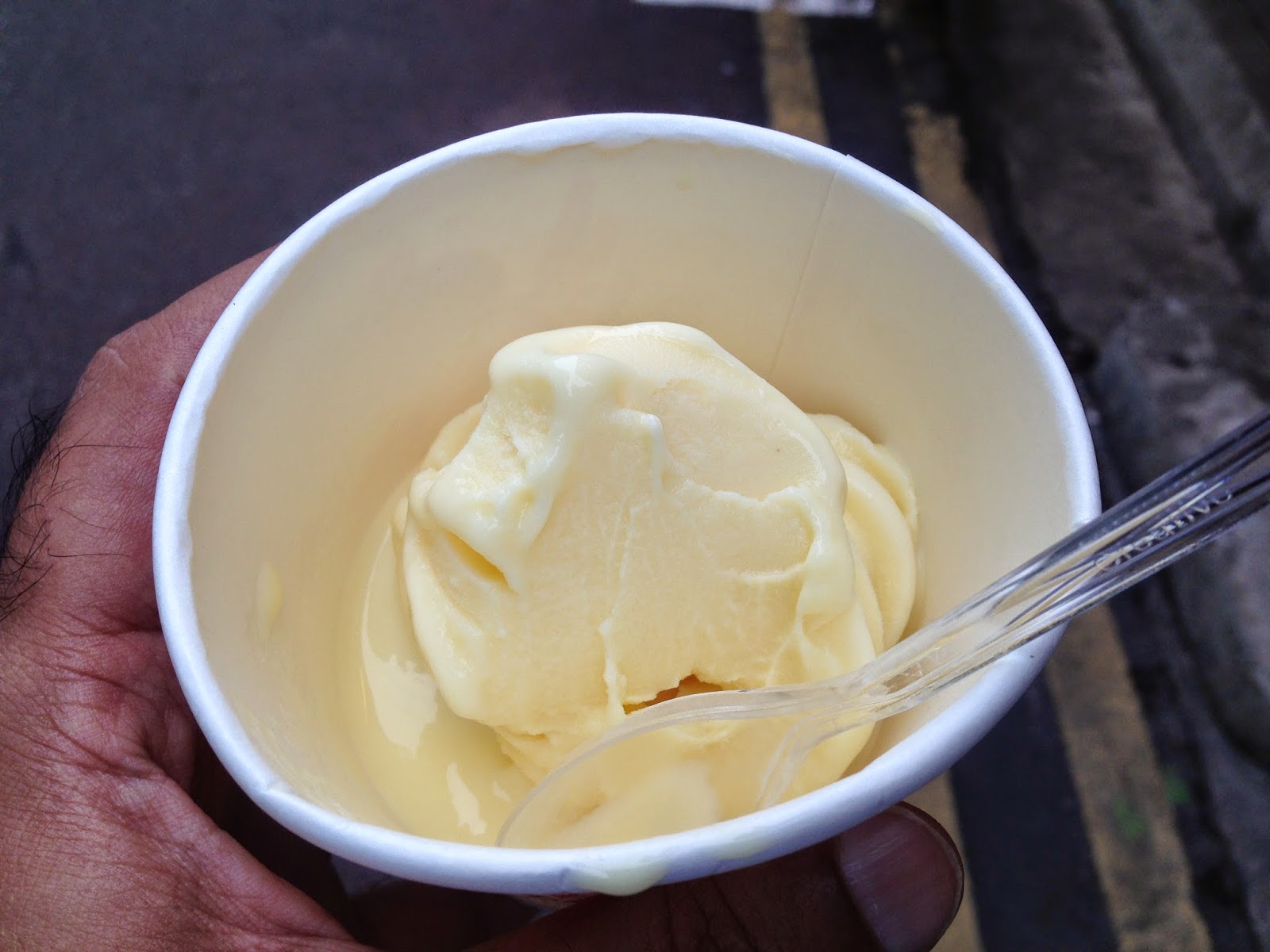 I chose durian ice cream, it cost just 50c and it was yum.... Honestly, I did not find the odour offensive. In fact, it had a unique delectable flavour, a bit like that of jackfruit.
Late in the evening, I headed back to Novena, and my mouth was watering thinking of all the exciting fare I could choose ftom Balestier. Tonight, it had to be a Malay meal - chicken redang. Redang is ceremonial food for the Minangkabau community from West Sumatra and is served during festivals like Hari Raya (Eid ul-Fitr), ceremonial occasions like weddings and to honour guests. Today, Redang is popular in Indonesia, Malaysia, Singapore and Brunei. 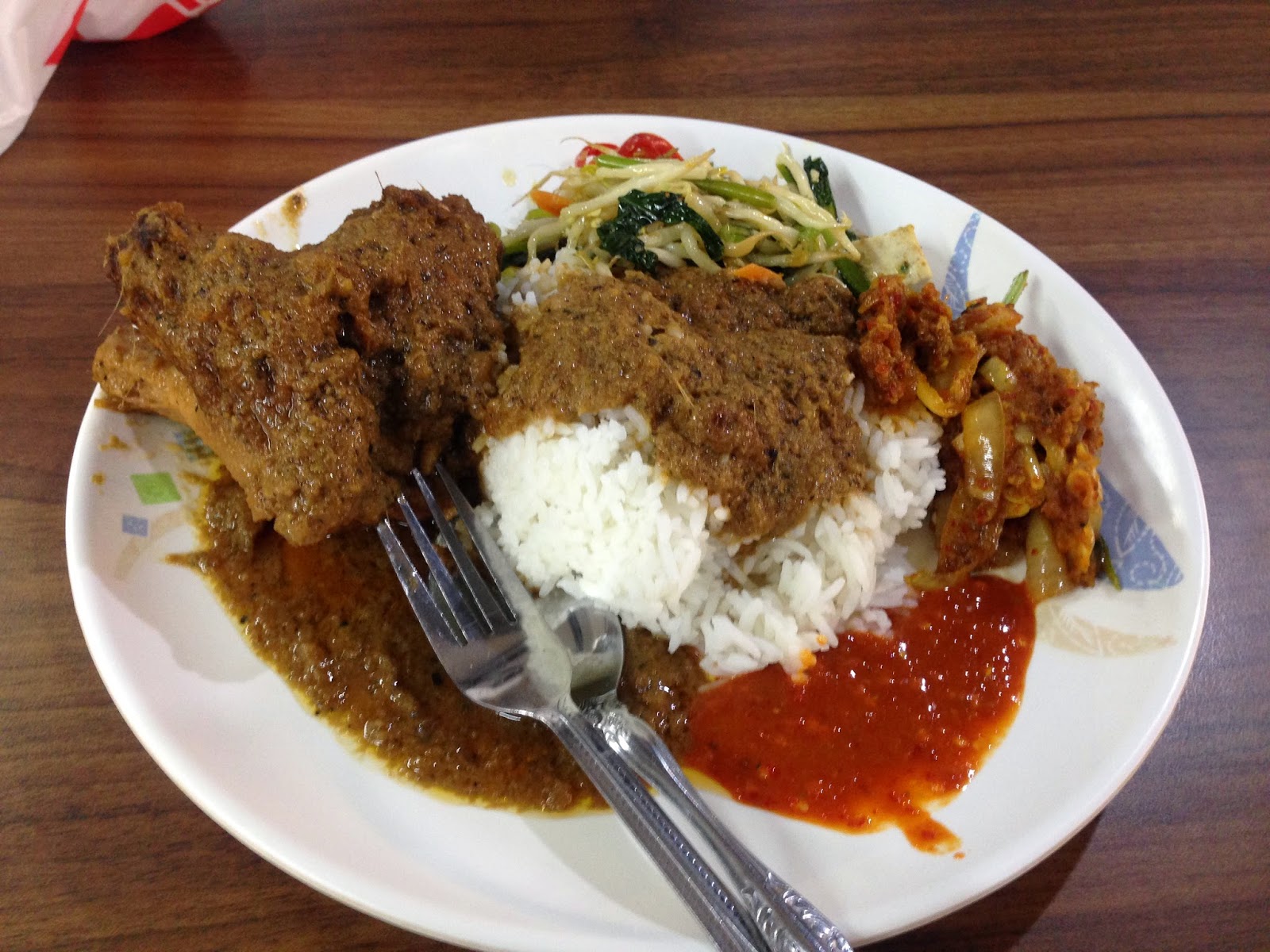 Traditional rendang takes hours to cook. Cooking rendang involves pounding and grinding ingredients as well as slow cooking, and so it is time-consuming and requires patience. The meat pieces are slowly cooked in coconut milk and spices until almost all the liquid is gone, allowing the meat to absorb the condiments. The cooking process changes from boiling to frying as the liquid evaporates.
Rendang is often served with steamed rice, ketupat (a compressed rice cake), or lemang (glutinous rice barbecued in bamboo tubes), accompanied with vegetable side dishes. I had my redang with sambal, cooked cabbage and salad. It was indeed delicious and it somewhat reminded of pur Chettinad chicken back home!
I thoroughly enjoyed my redang, indeed what a way to end the day....
Posted by Rajeev at 11:42 PM