I woke up feeling very happy this morning. It was a bright sunny morning, but that was not the only reason to be cheery - I was only a day away from meeting Neeti, as her course was to be getting over tonight.... 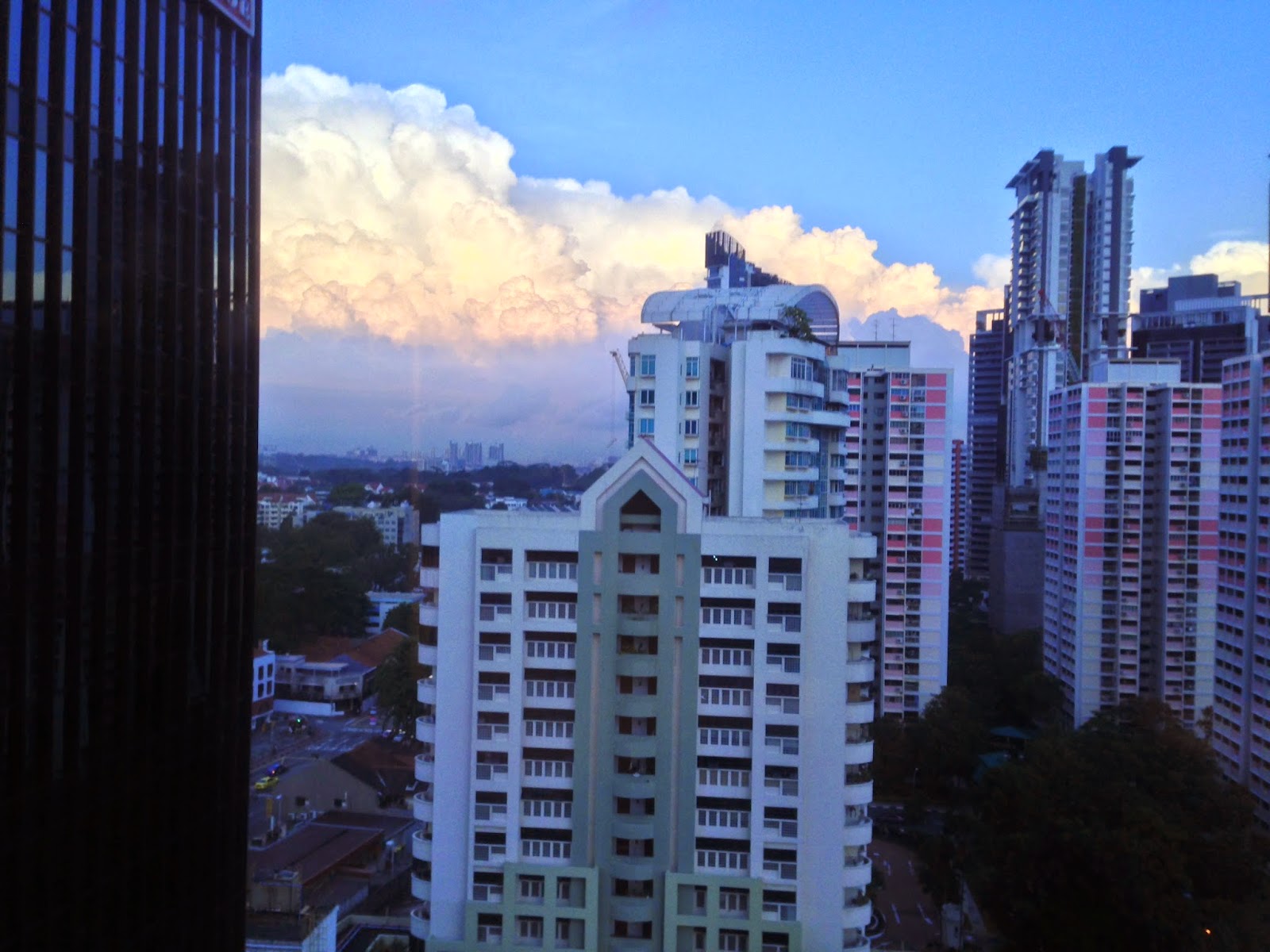 And then it was independence day, India's independence day... I was 4,000 kilometers away, I was a missing a momentous occasion - Narendra Modiji's maiden speech at the Red Fort in Delhi.
Despite the distance, my heart was in India, I was thinking about the roadmap that Modiji would layout for India, for the next 5 years, at the least, but I hope that's not less 15-20 years....
With a lot of optimism for the future of our nation, I got ready and headed out for breakfast at the Kopitiam in Balestier Food Market. I passed by Sun Yat Sen Nanyang Memorial Hall, a villa that was used by the founding father of the Republic of China, Dr. Sun Yat-sen in the early 1900s for his organisation, Tongmenghui. 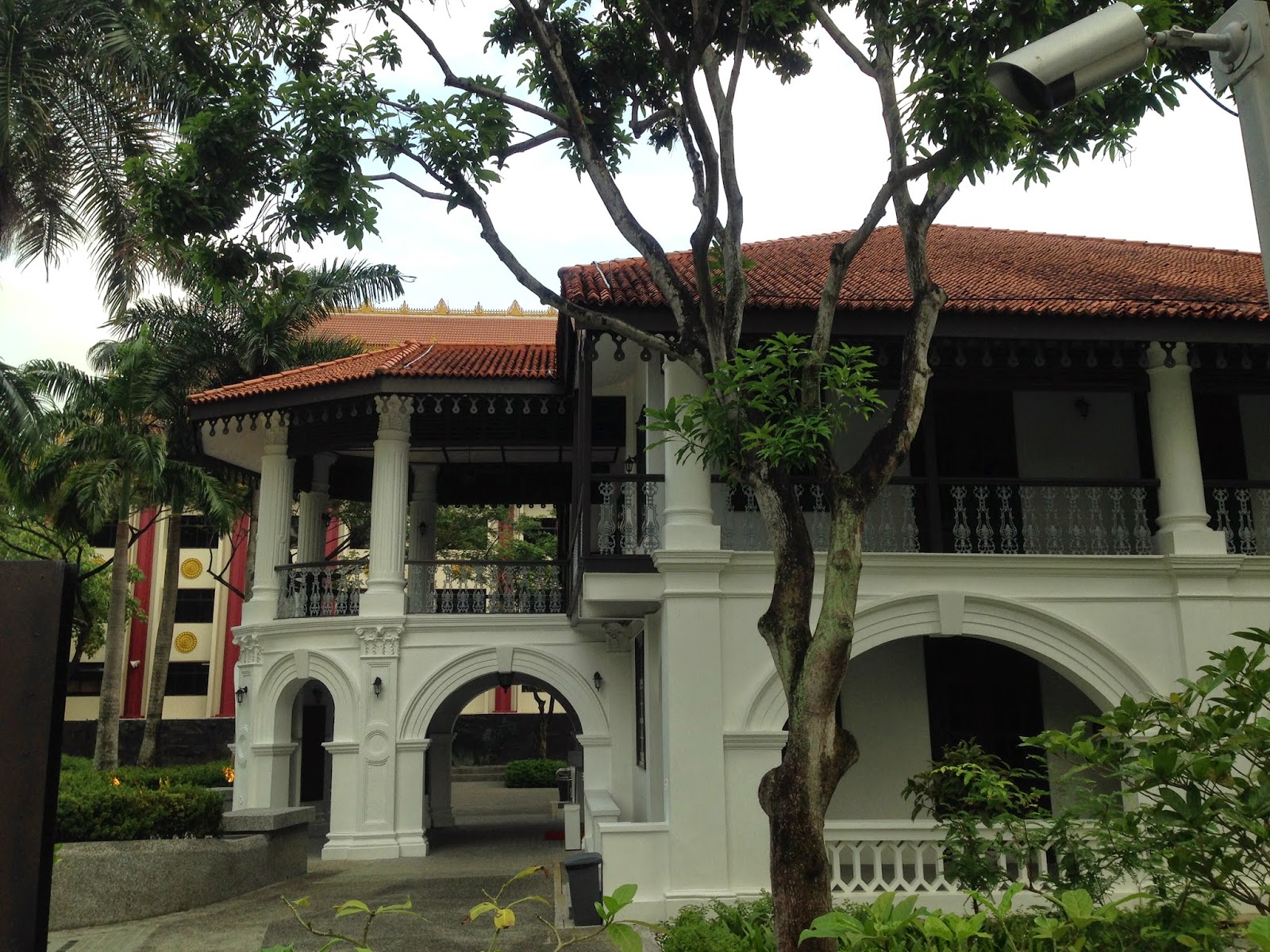 I had to visit the memorial during this trip, my hotel key-card card granted me free access, but today was not the day for it. Today, I had to head to the place I so wanted to visit ever since I knew I was going to visit Singapore, the Singapore Botanic Gardens.... Afterall, it was a bright, sunny morning and what an ideal morning to spend outdoors.
After breakfast (I had very interesting, delectable local fare), I took a bus from Balestier Road to take me to Novena MRT. When I alighted at Novena, my heart sank - heavy clouds were moving in, covering the skies fast.... I prayed for just a little sunshine and moved on.
I took the North South Line and headed north towards Bishan, where I interchanged to the Circle Line, that would take me to my destination for the morning. 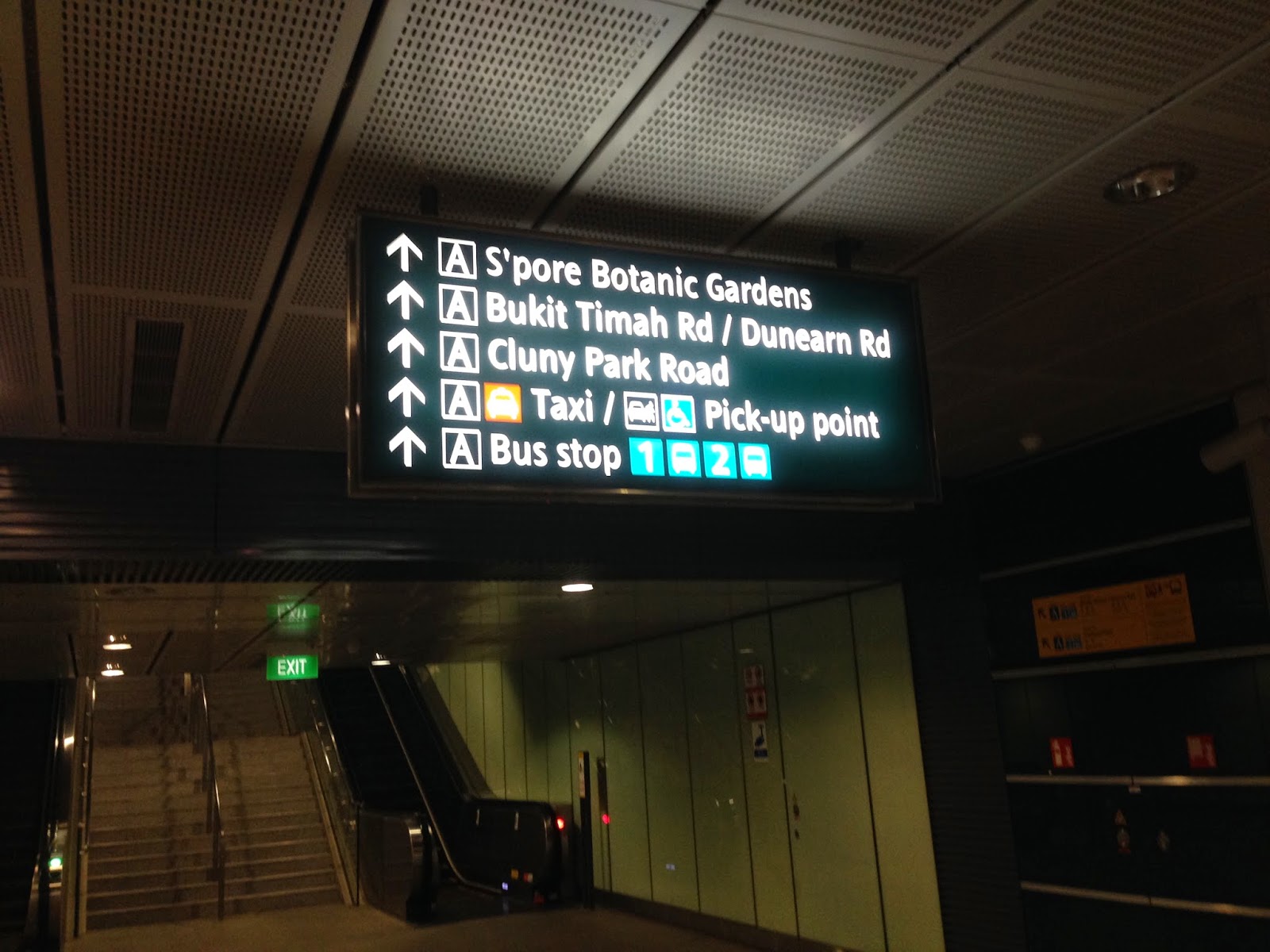 The clarity of signages and directions in Singapore's MRT and transport network (as well other places, like Hong Kong) is liberating. All you need is a map, which supplements the signage. Seldom, did I ask for directions from anyone, in the last two days that I spent here. 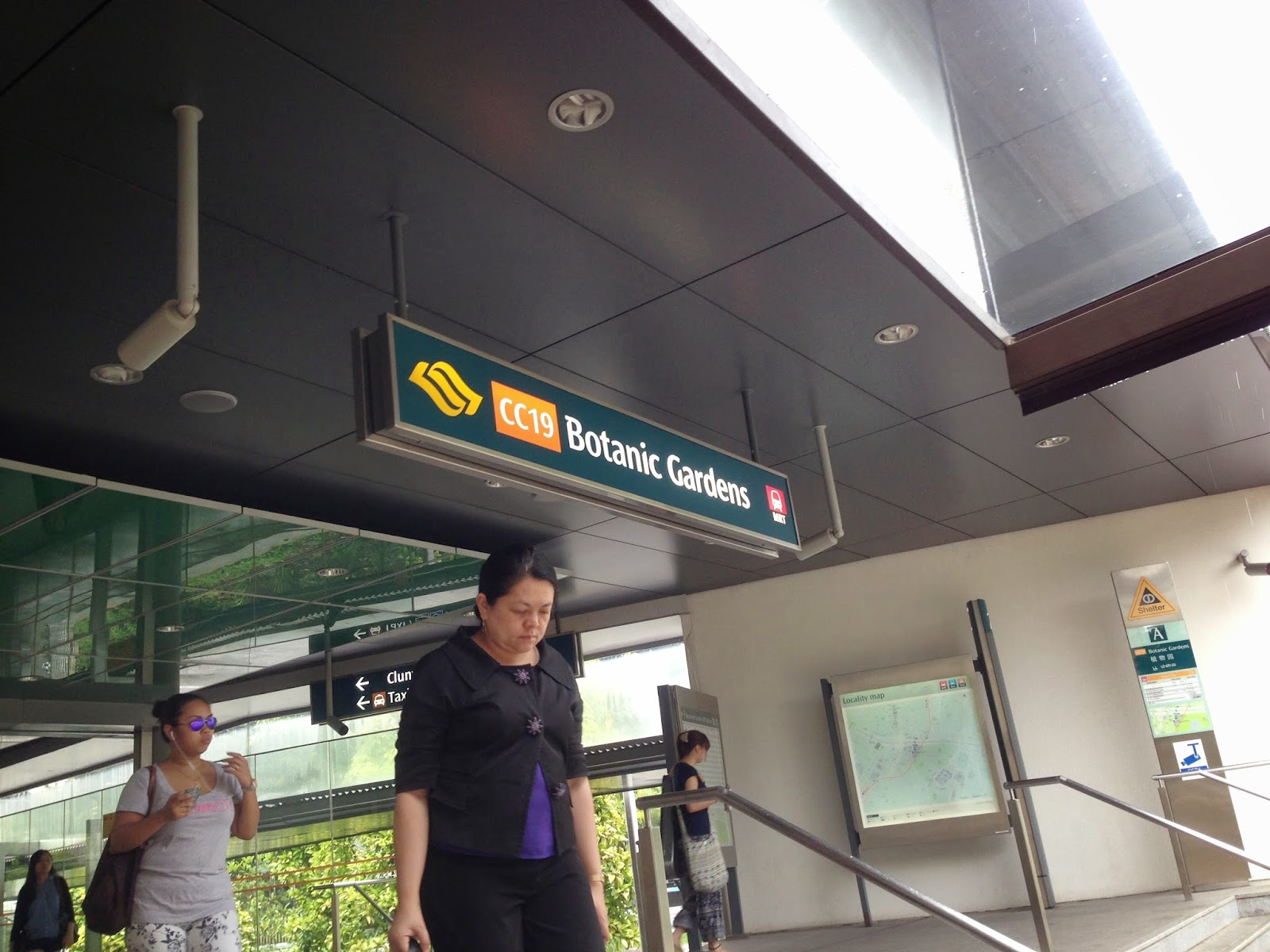 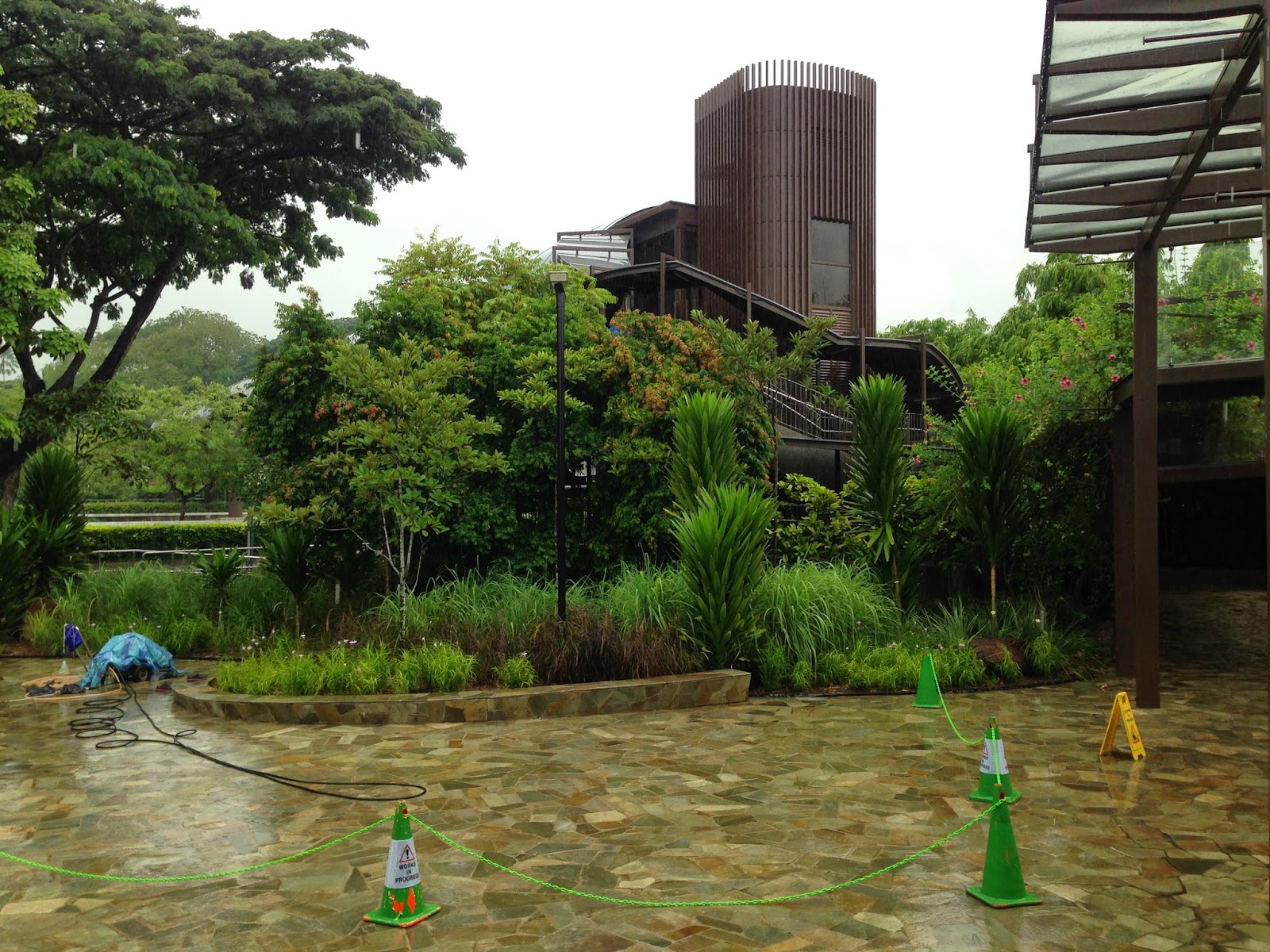 Just as I reached the exit of the MRT station, I knew my worst fears were coming true... It was raining, the rain was rather heavy, so heavy that I had to wait at exit for nearly 20 minutes till the intensity reduced. 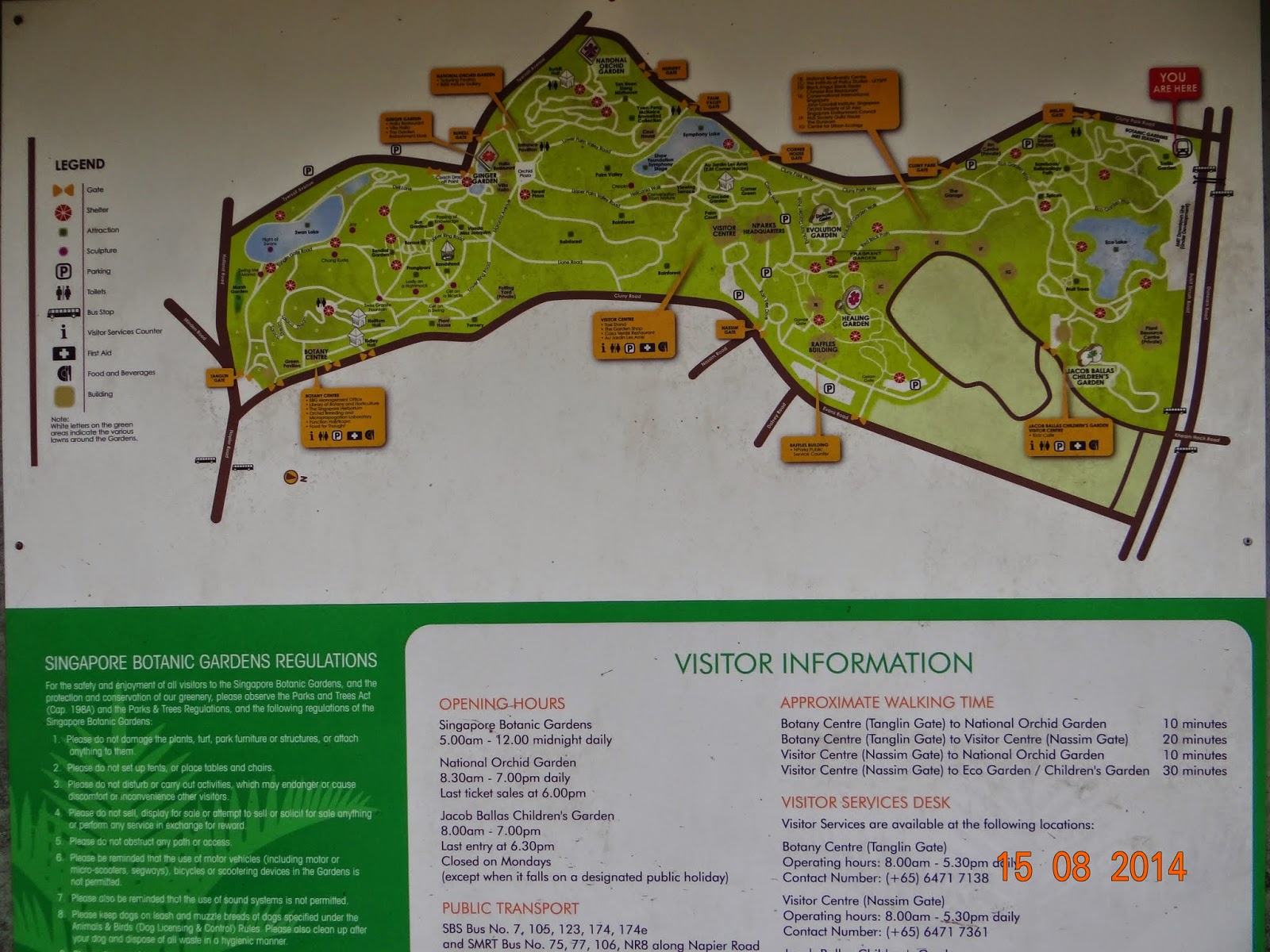 I stopped by to look at the map and plan my walking trail through the 74-acre green patch that was indeed thriving despite the rapid urbanisation and rising skyscrapers of the city-state. This was the third botanical garden that I was visiting.
The first one was at Entebbe, Uganda - the Entebbe Botanical Gardens. I went there in 1981, I was little kid then. The enduring memories of marvelous green palm fronds fluttering in the breeze against a backdrop of shimmering, gentle waves of Lake Victoria are very evocative, they still give me goosebumps.
The second one was at Mauritius, Sir Seewoosagur Ramgoolam Botanical Garden, popularly known as the Pamplemousses Botanical Garden, which is known for typical African species - the baobabs, mahogany and yes, the giant water lilies. The visit here was again special, for it was during the initial days of my life, together, with Neeti... 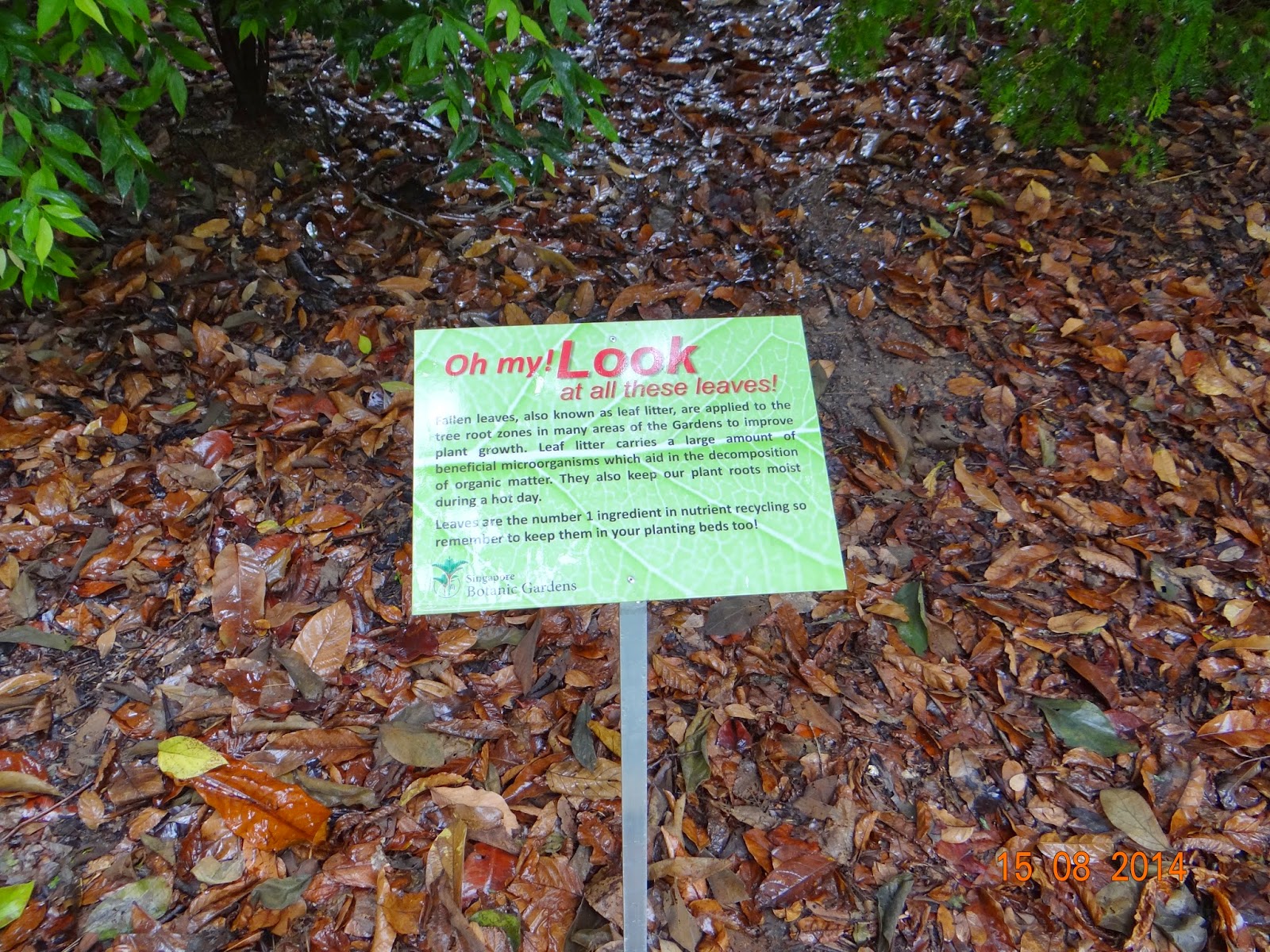 My first impressions of the garden were positive. The garden was spic and span, fallen leaves were placed at the base of trees and plants - they weren't scattered around. That was the way they claimed, the nutrients were being returned to the soil. 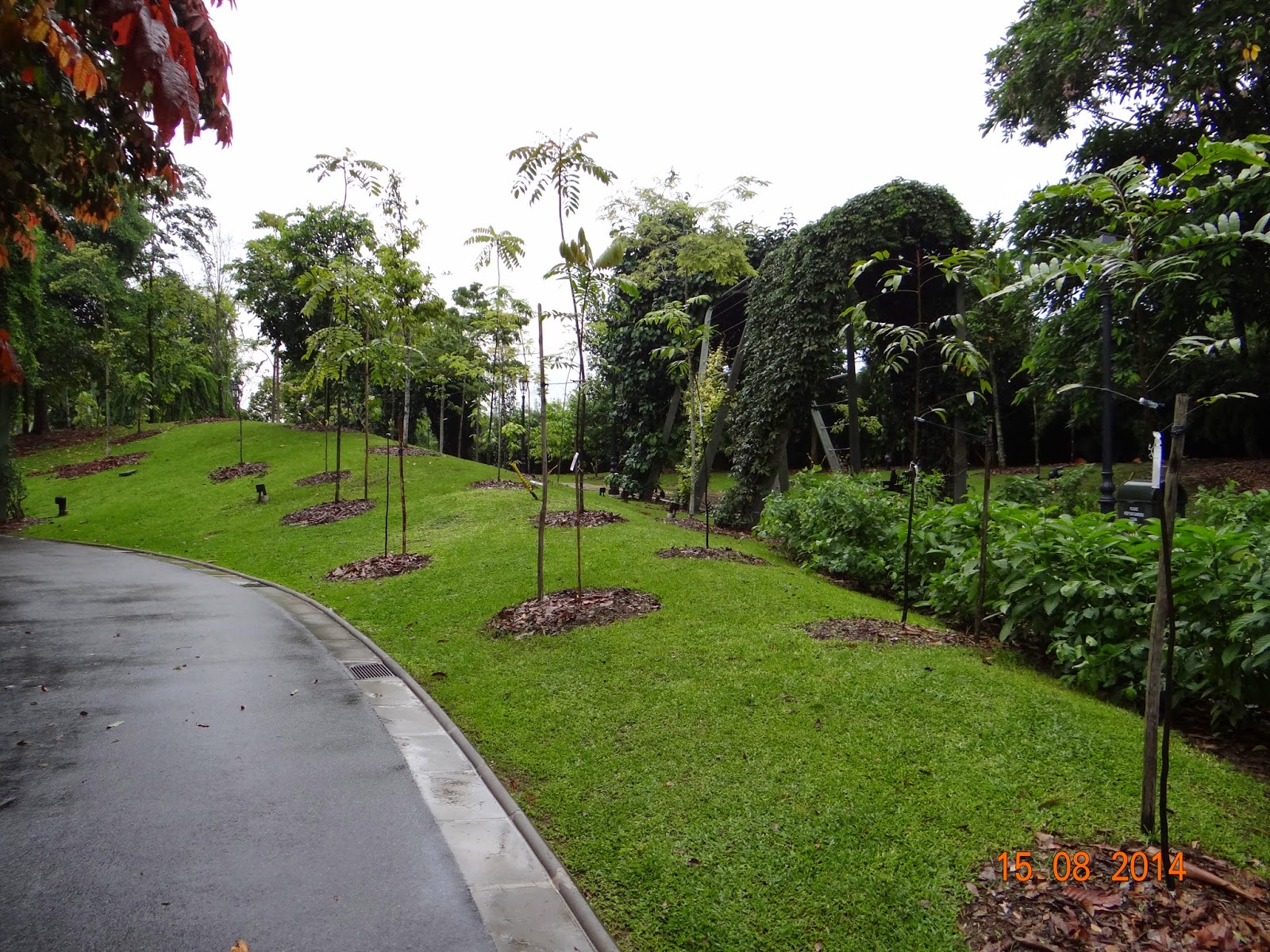 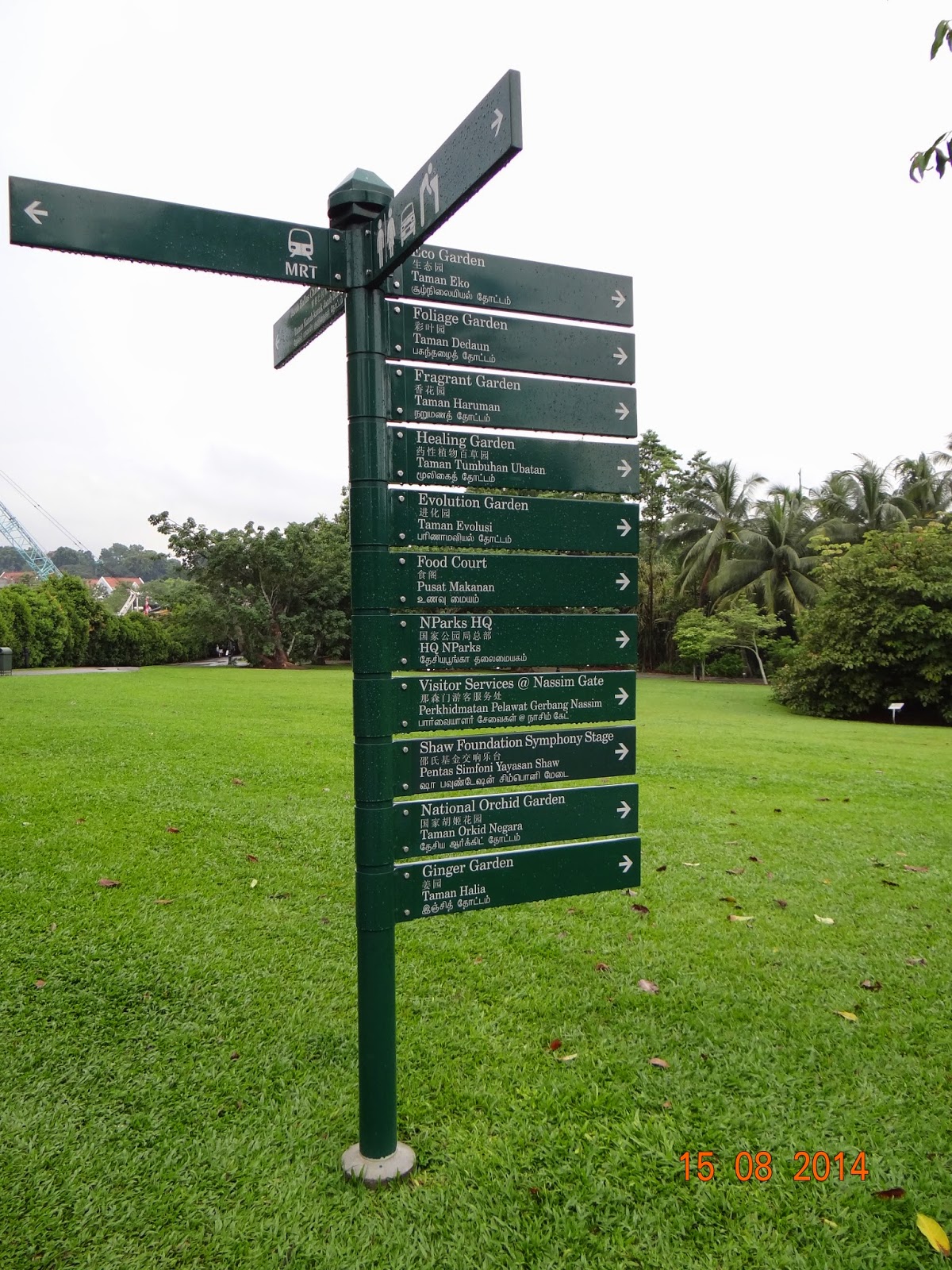 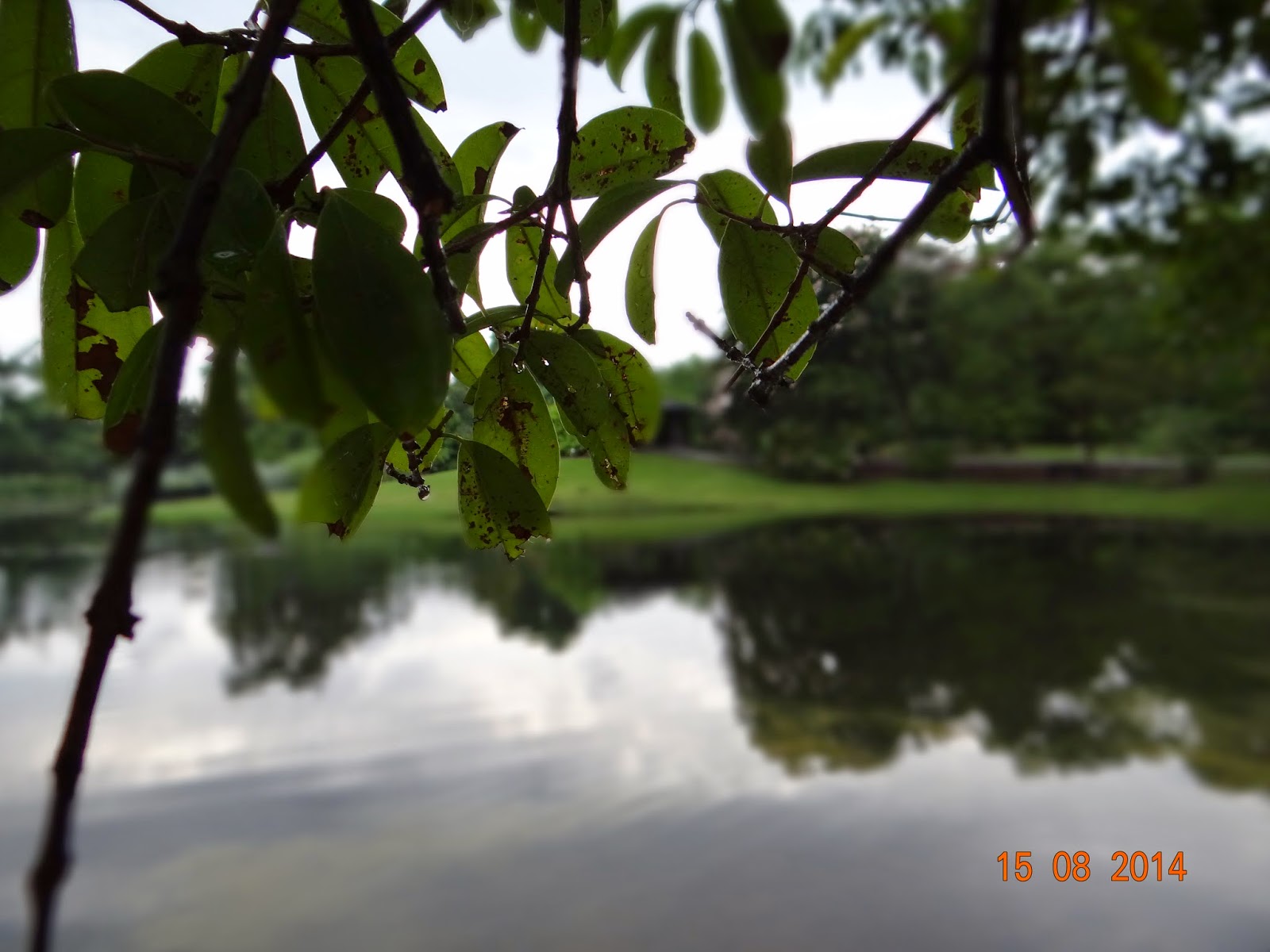 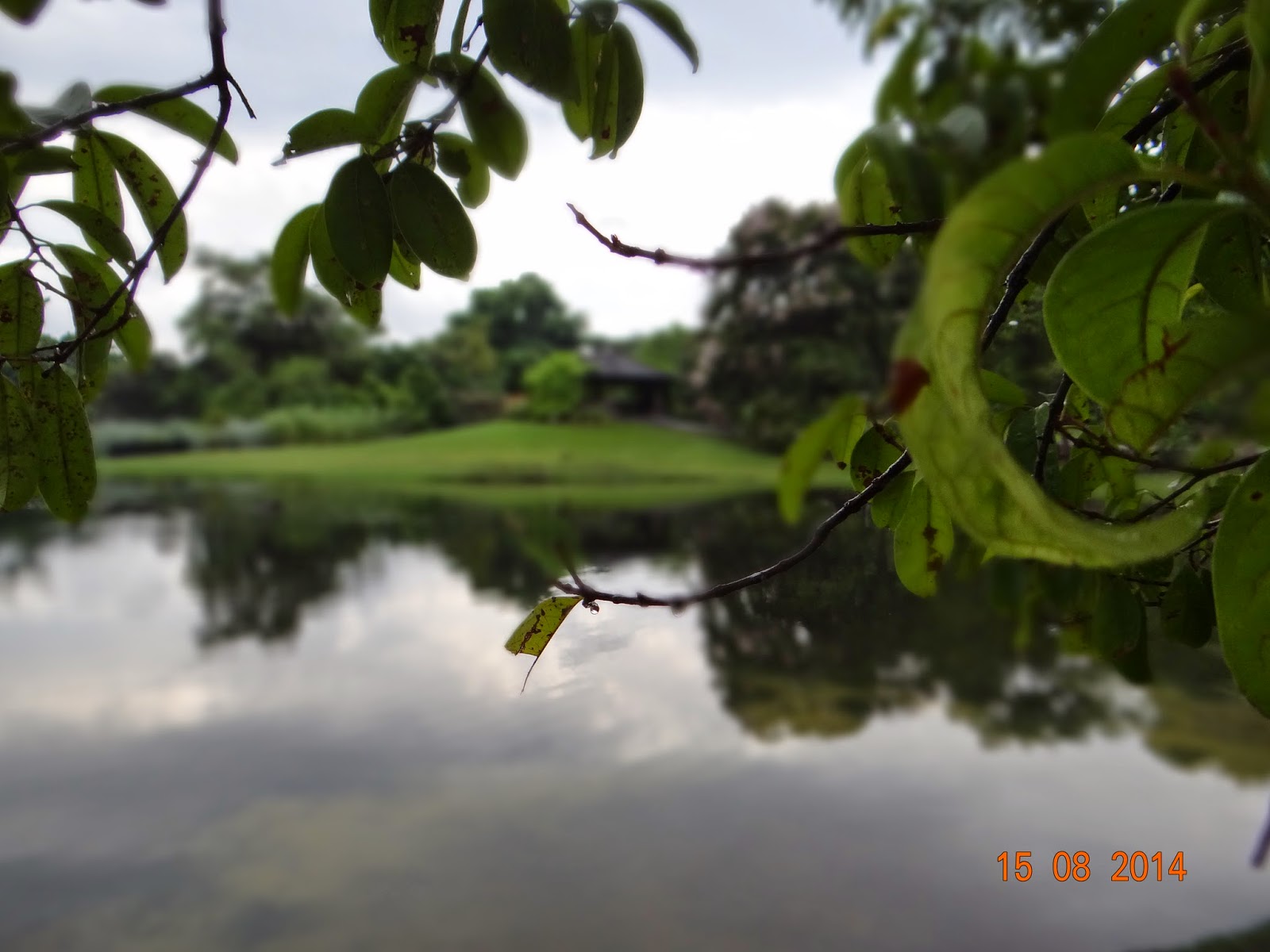 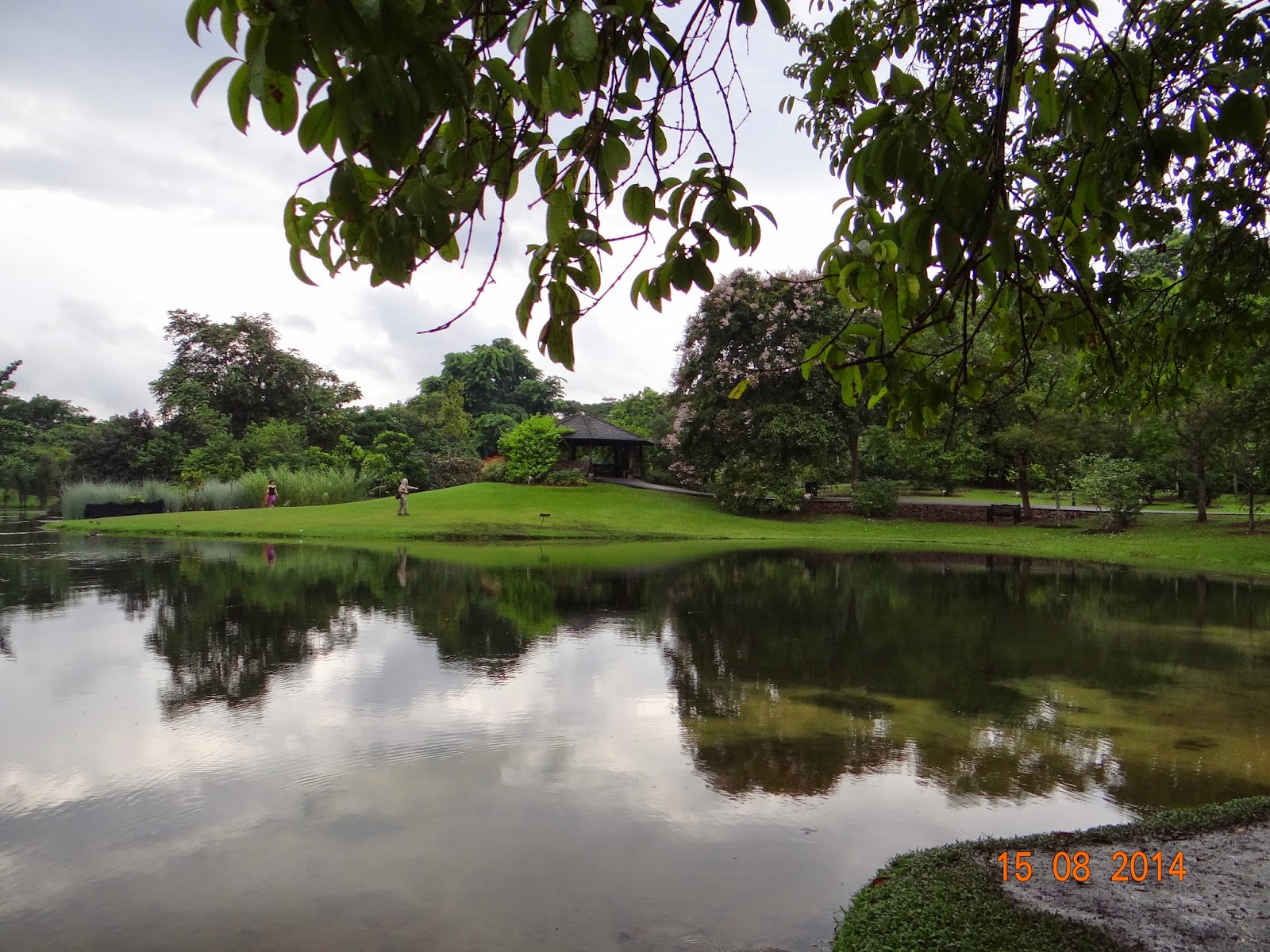 The garden was much like the Garden of Eden - green and peaceful, with little ponds and lakes breaking whatever little monotony that the vegetation around gave,
The garden had its beginnings in 1822 when Sir Stamford Raffles, the founder of modern Singapore who was also a keen naturalist, developed the first ‘Botanical and Experimental Garden’ at Fort Canning.
In 1859, the Garden was shifted to its present site an agri-horticultural society under the colonial administration. In its early years, the Gardens played an important role in development of agriculture in Singapore and Malaya. The administration collected, grew, experimented and distributed plants that could thrive in the climate of this region.
A little known fact is that development of the rubber plantations in Malaya had its roots here, in these Gardens. A native of the Amazon rainforest, Para-Rubber, hevea brasiliensis, was introduced to the region from these gardens. And it went on to became a major cash-crop which brought great prosperity to Malaya and then, later, Malaysia. 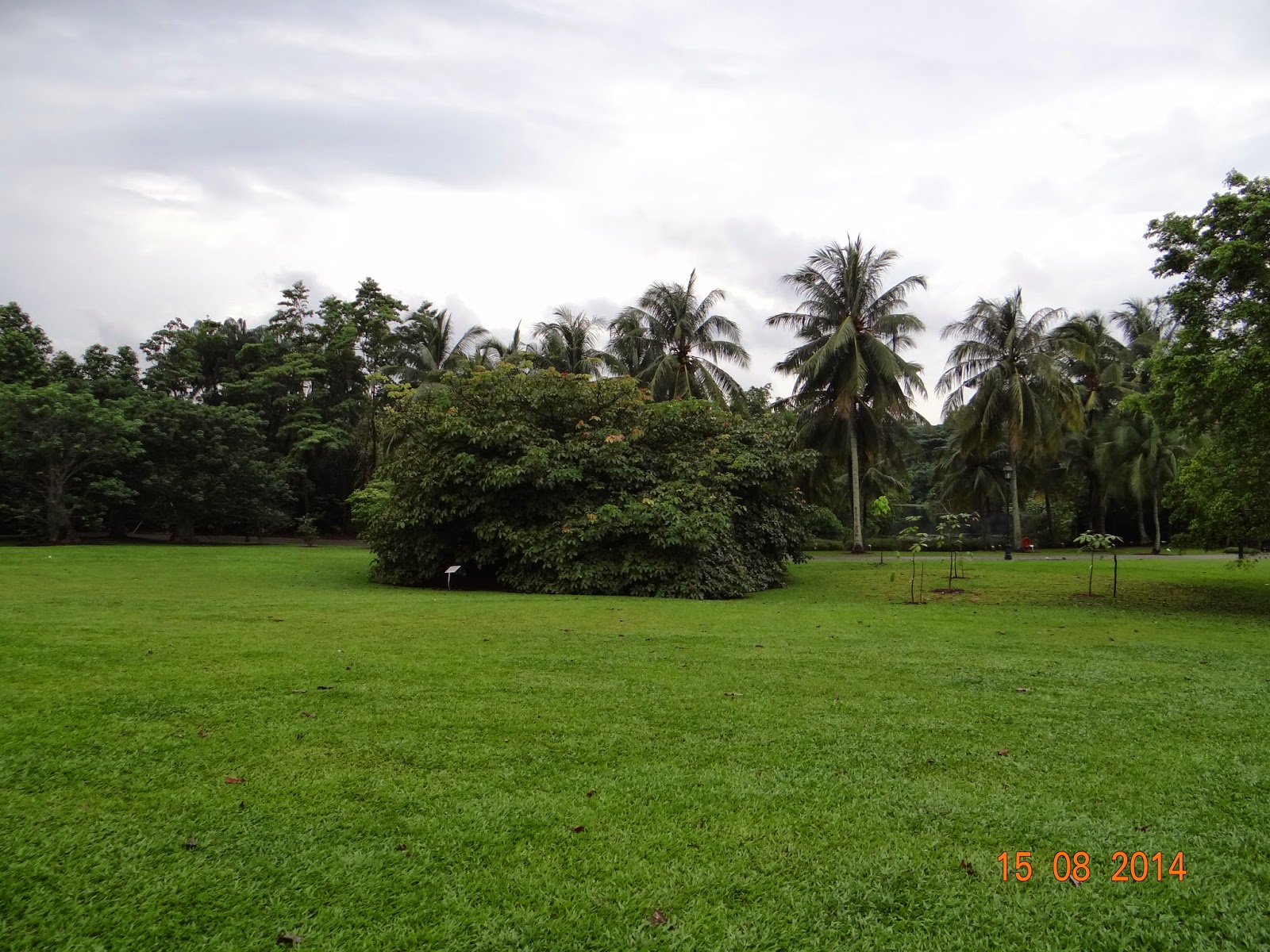 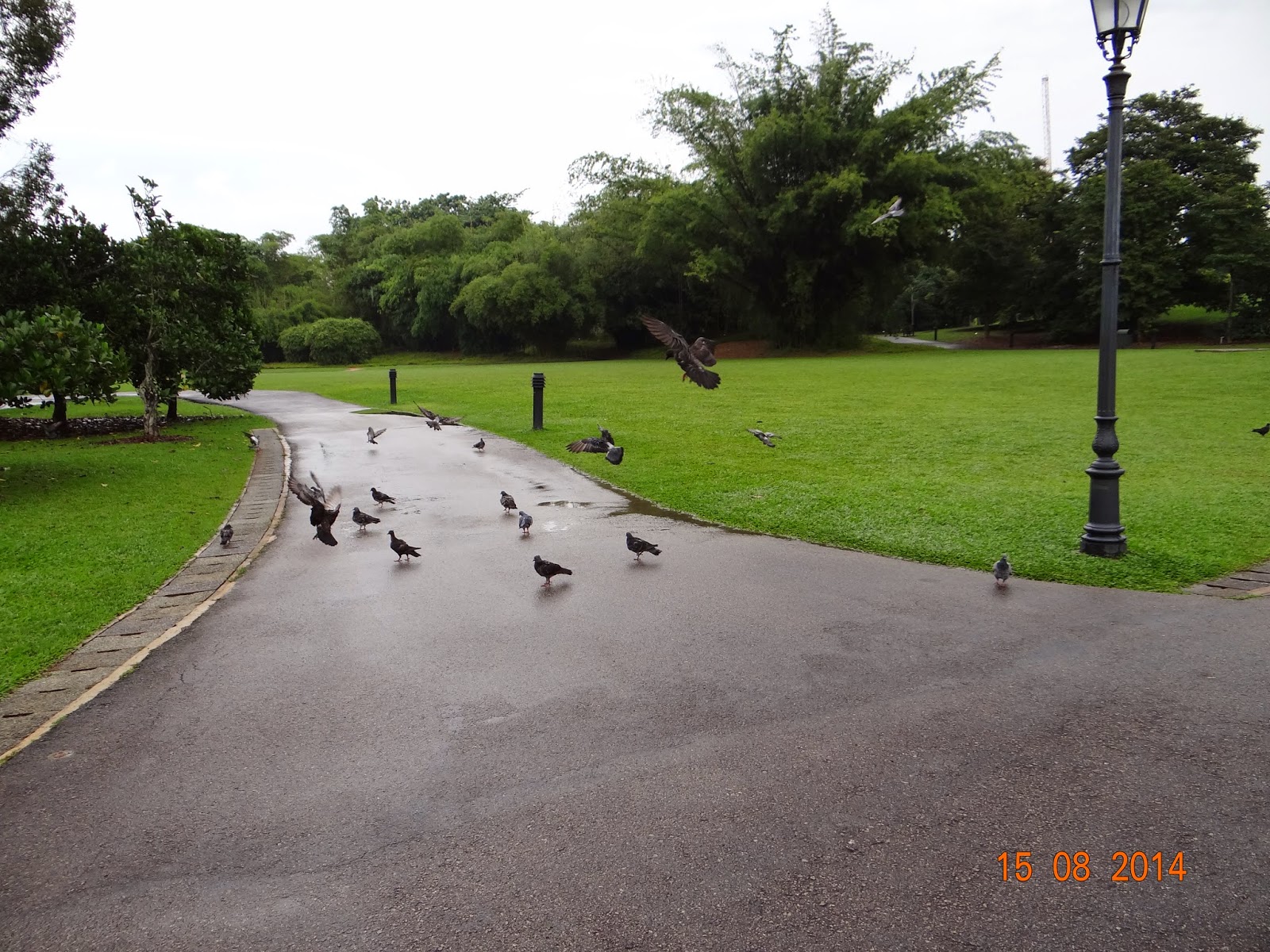 Besides, plants, it was evident, the Gardens supported a wide variety of life - including these pigeons. 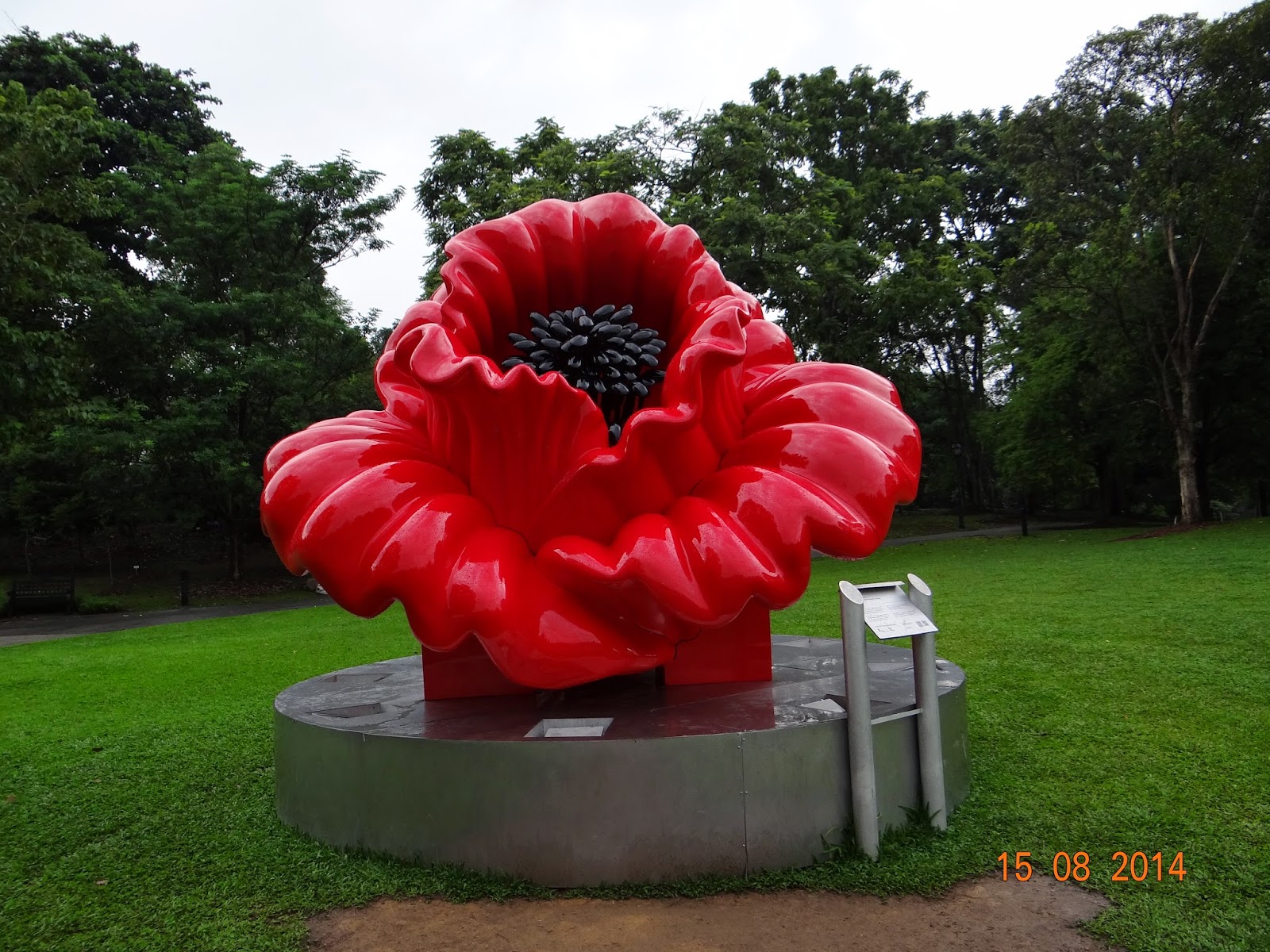 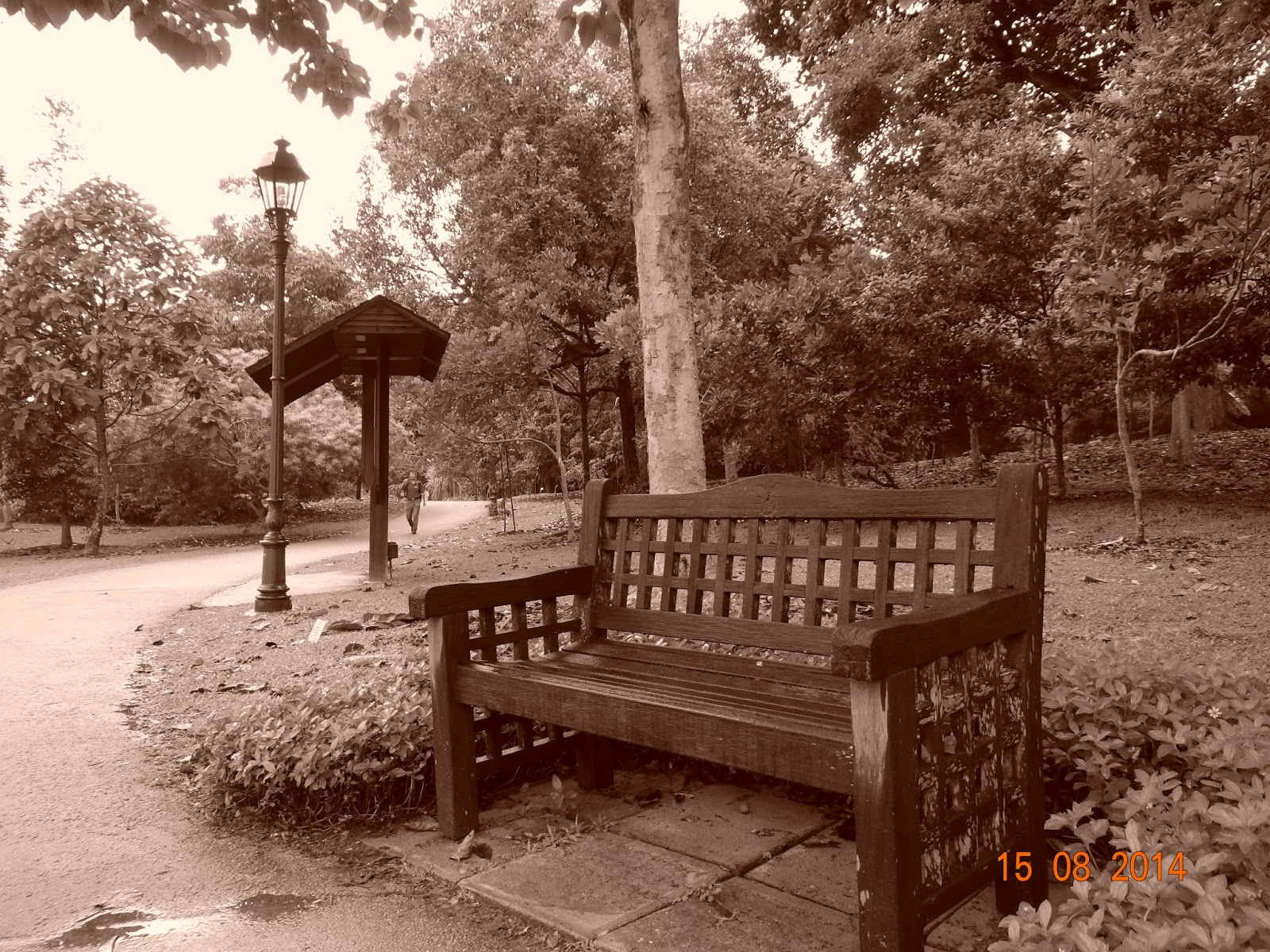 I wish I could pause here, sit here and soak in all the peace that Nature has to offer....
But I had to move on.... There is a lot to see in these Gardens....