On The World War Trail..... Reflections At Bukit Chandu...

My next halt on the World War Trail was Bukit Chandu.

Bukit Chandu is a hill, it literally means "Opium Hill" in Malay and was so christened after an opium-processing factory located at the foot of the hill.
From the Changi Museum, I headed to the Tenah Merah MRT from where I took the East-West line to head to Pasir Panjang MRT. Thanks to my 4G SingTel prepaid connection, that came with 1GB access, I used Google Maps with ease and in no time, I found my way to Reflections at Bukit Chandu....
The 2-kilometer walk up Bukit Chandu hill was steep and gruelling. It had rained sometime and the humidity was excruciating.
Housed in a restored bungalow, which was built at the turn of the 20th century for senior British officers, Reflections At Bukit Chandu is a permanent exhibition on the World War II in Malaya. It covers the socio-political climate of the Malay Peninsula in the late 1930s, Japan's invasion plans, and the British strategy for defending Singapore. 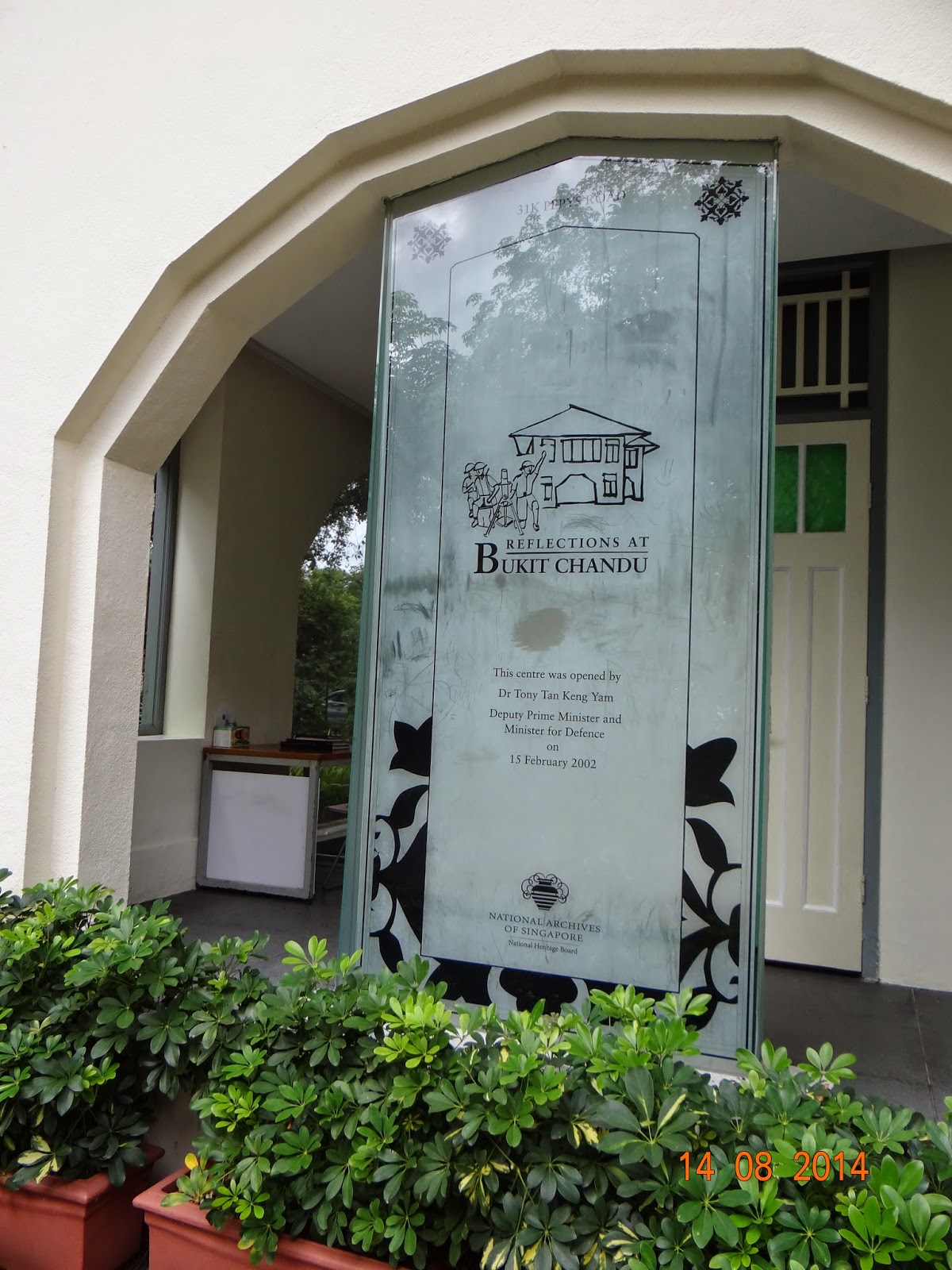 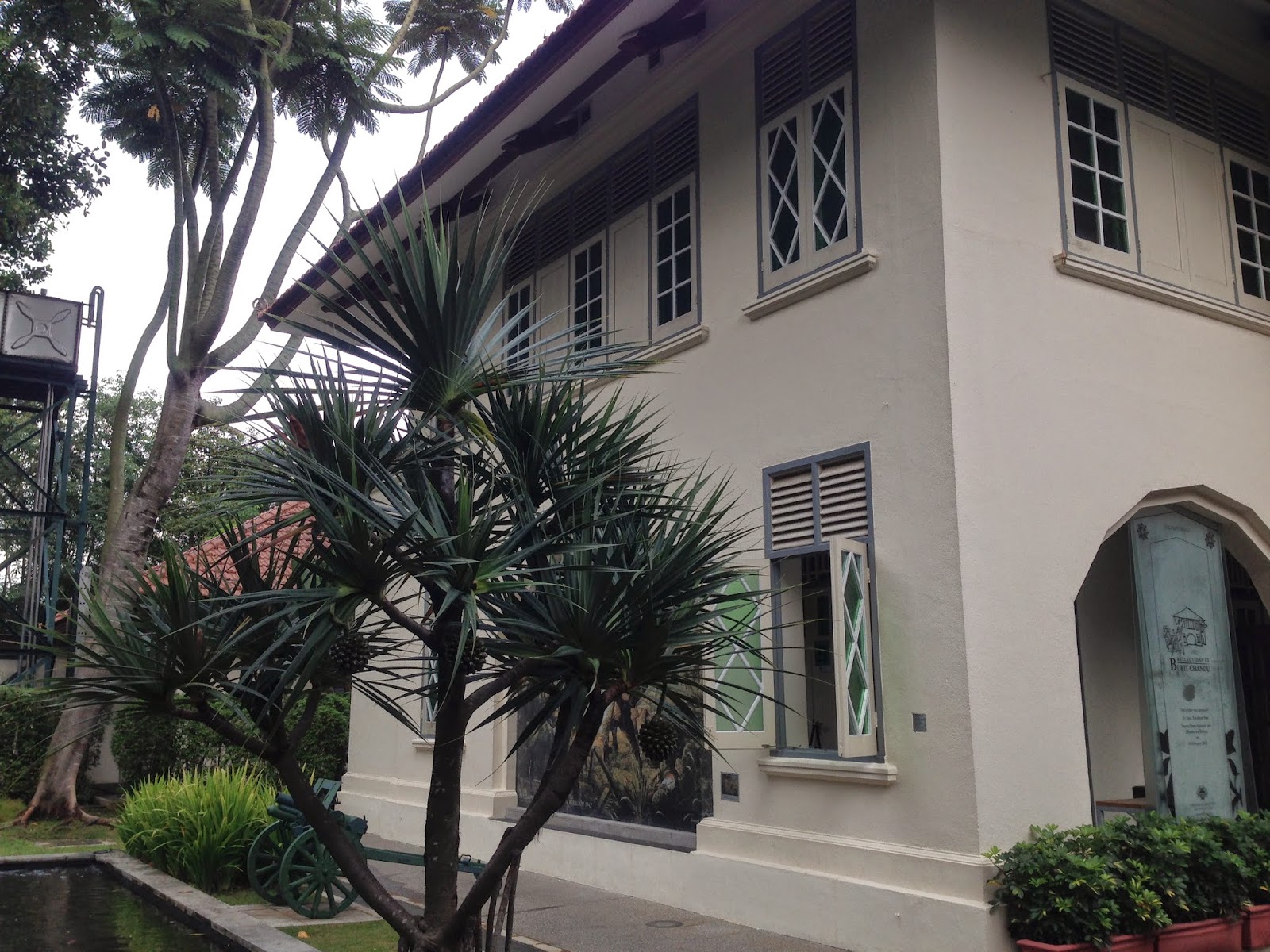 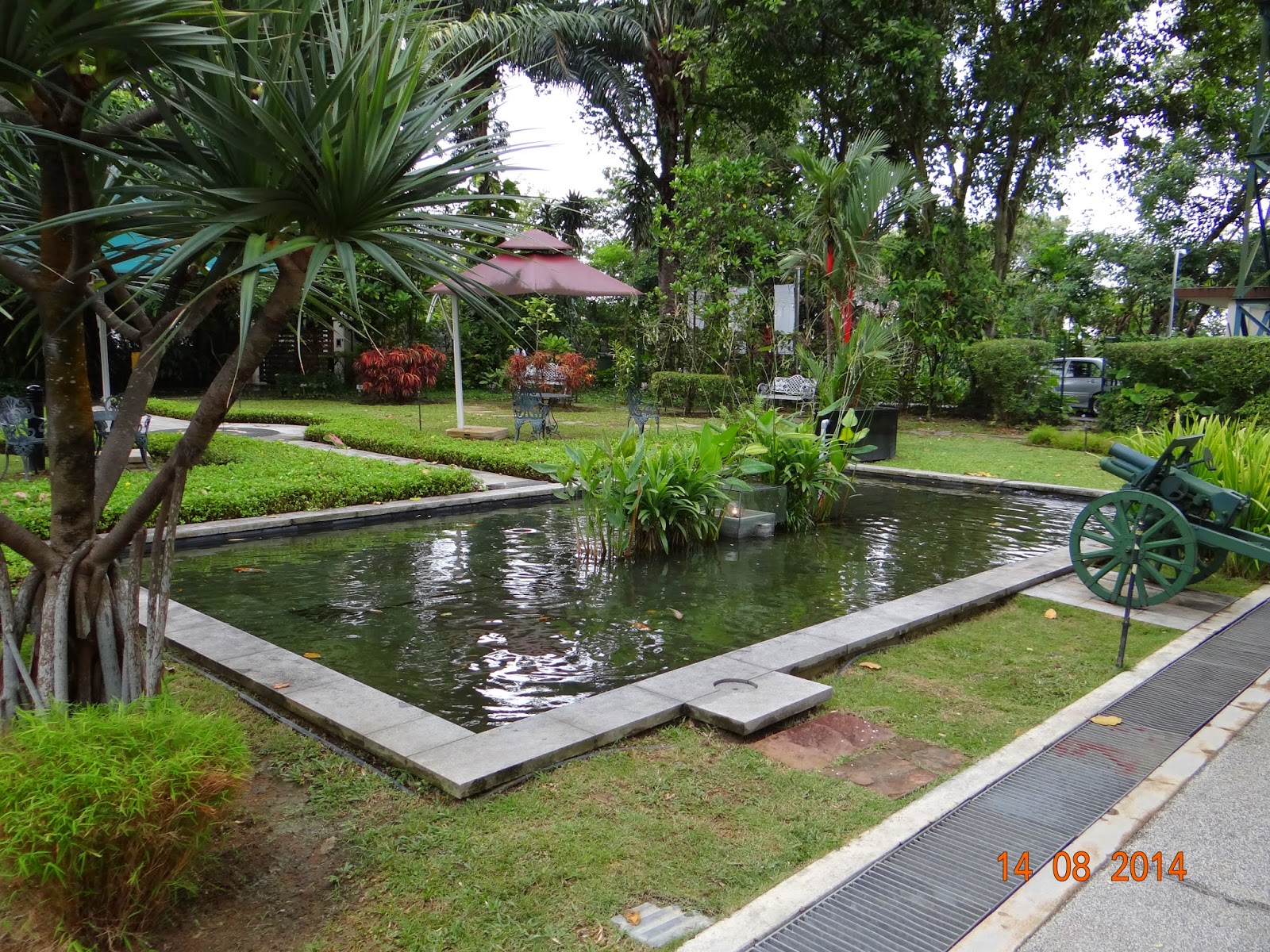 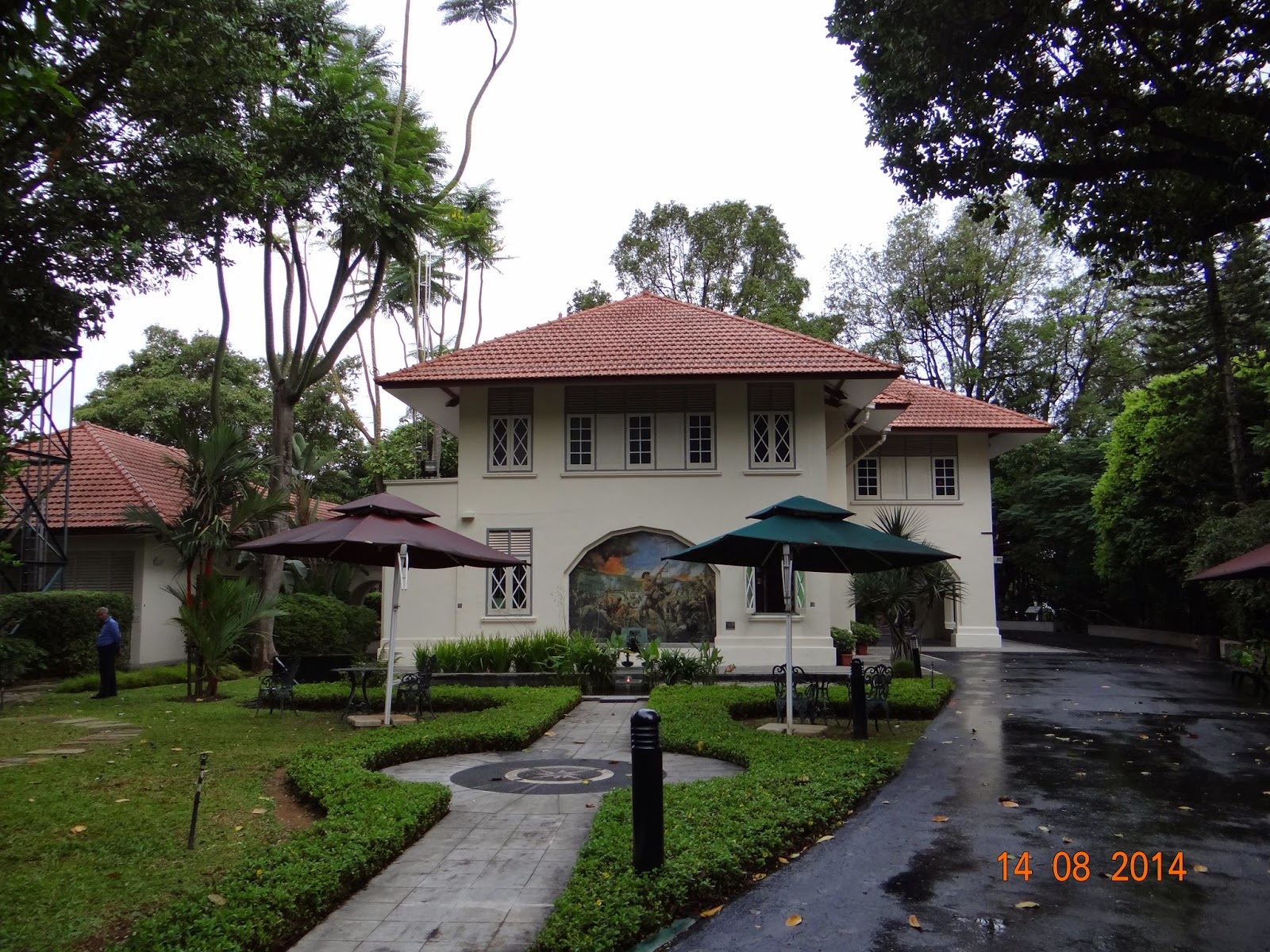 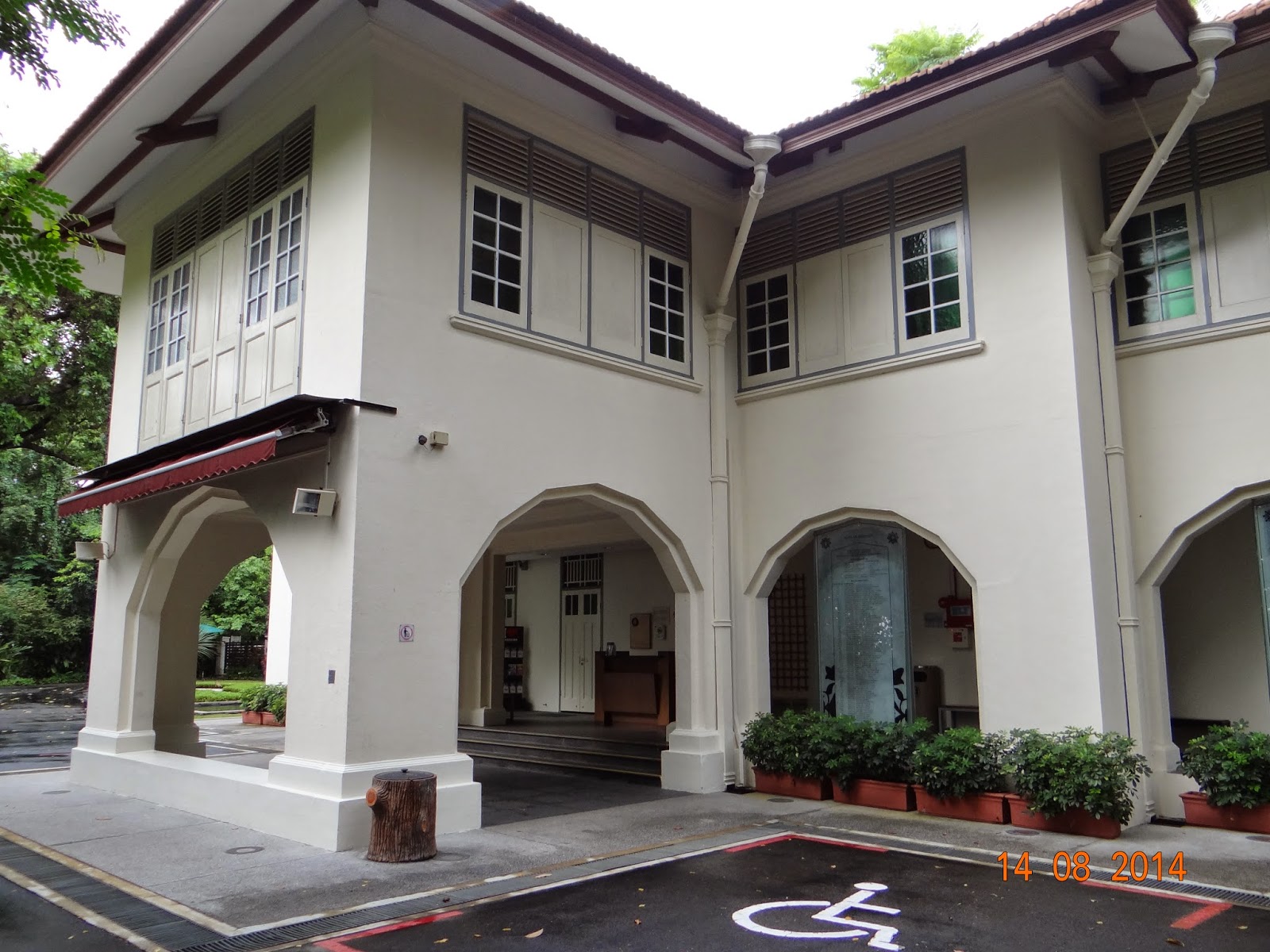 The bungalow was quite nice with gardens and fountains around it. The dense tropical foliage was so very visually appealing and there so many butterflies fluttering around, and yes, birds chirping. If I had time, I would have loved to laze around here reading a book.
But I had a mission to accomplish... to finish my World War Trail at Bukit Chandu. 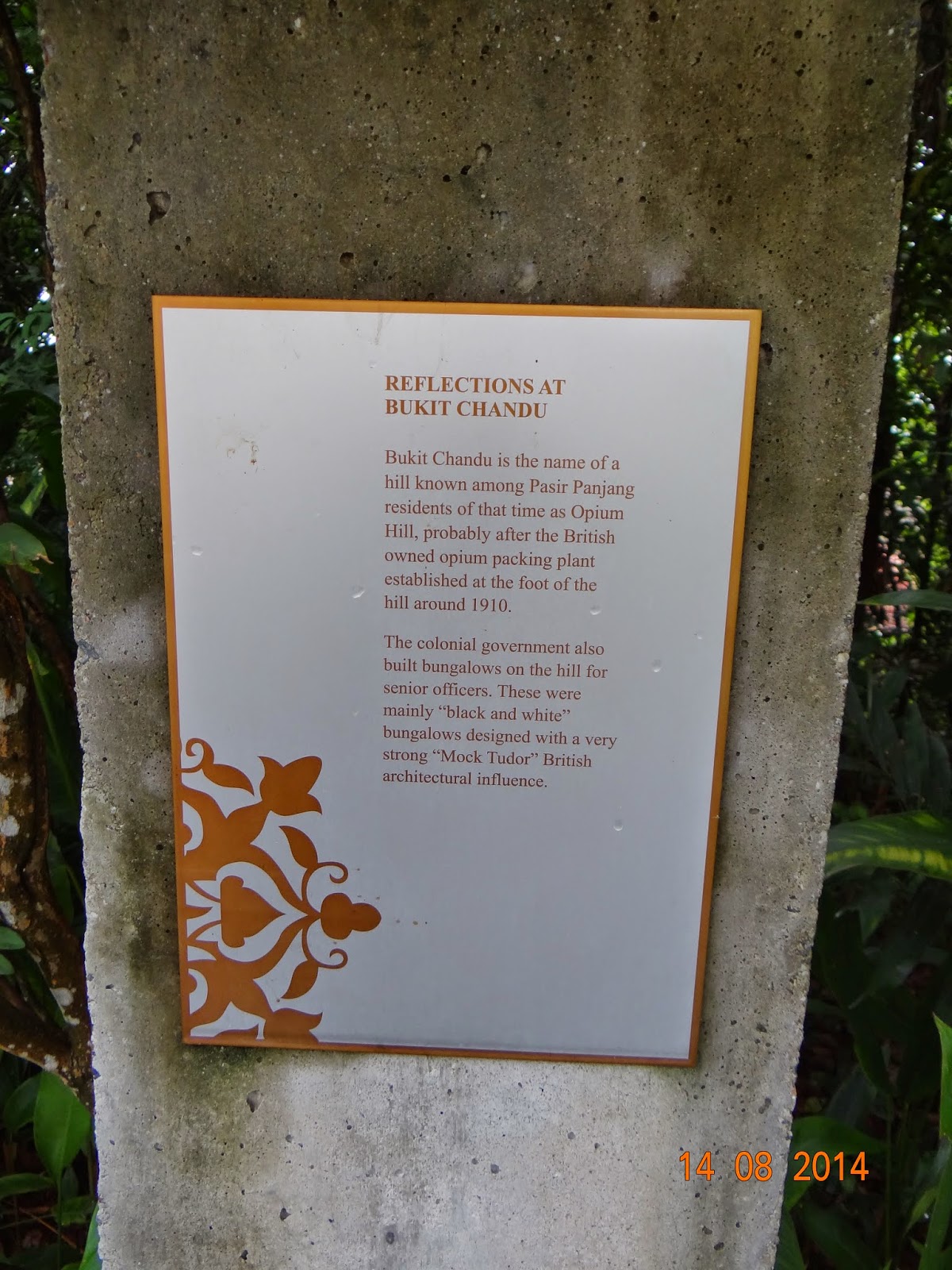 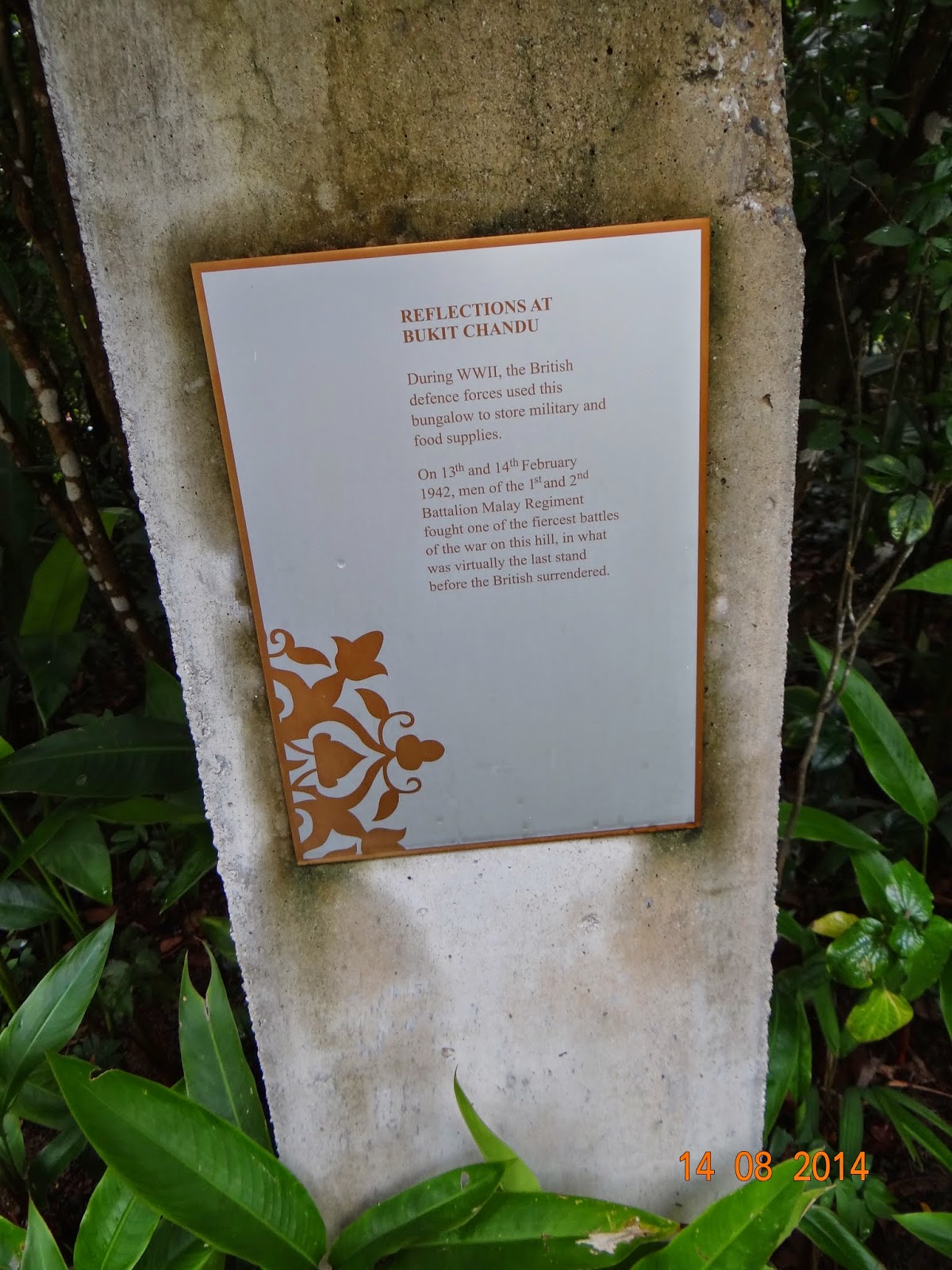 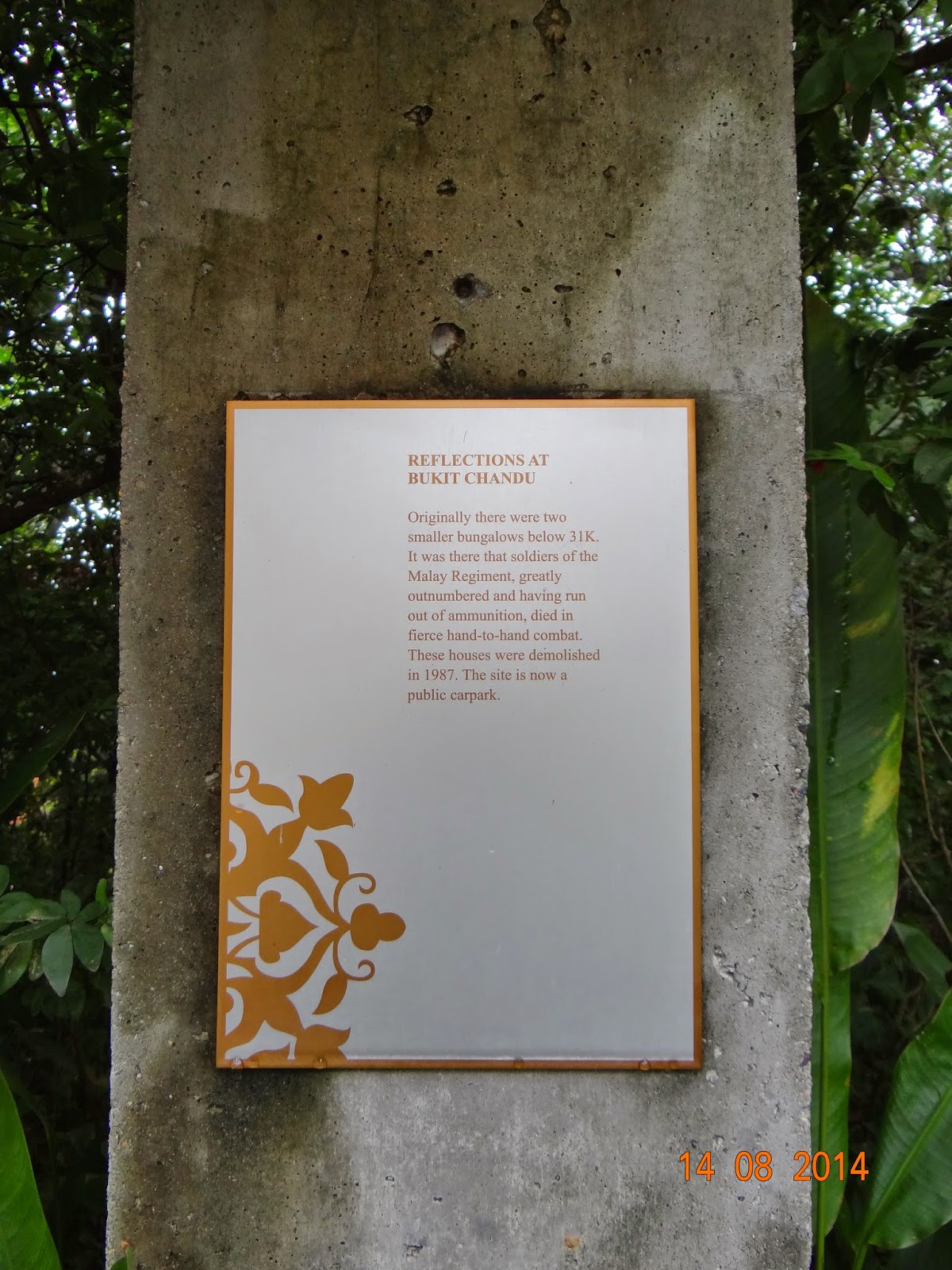 At the reception, I was told by the friendly old man, an ethnic-Chinese, managing the place, that I had only 45 minutes to roam, as it was nearing closing time. He assured me that this time was nearly sufficient to see the exhibits in the bungalow.....
Well, that was indeed fine.... 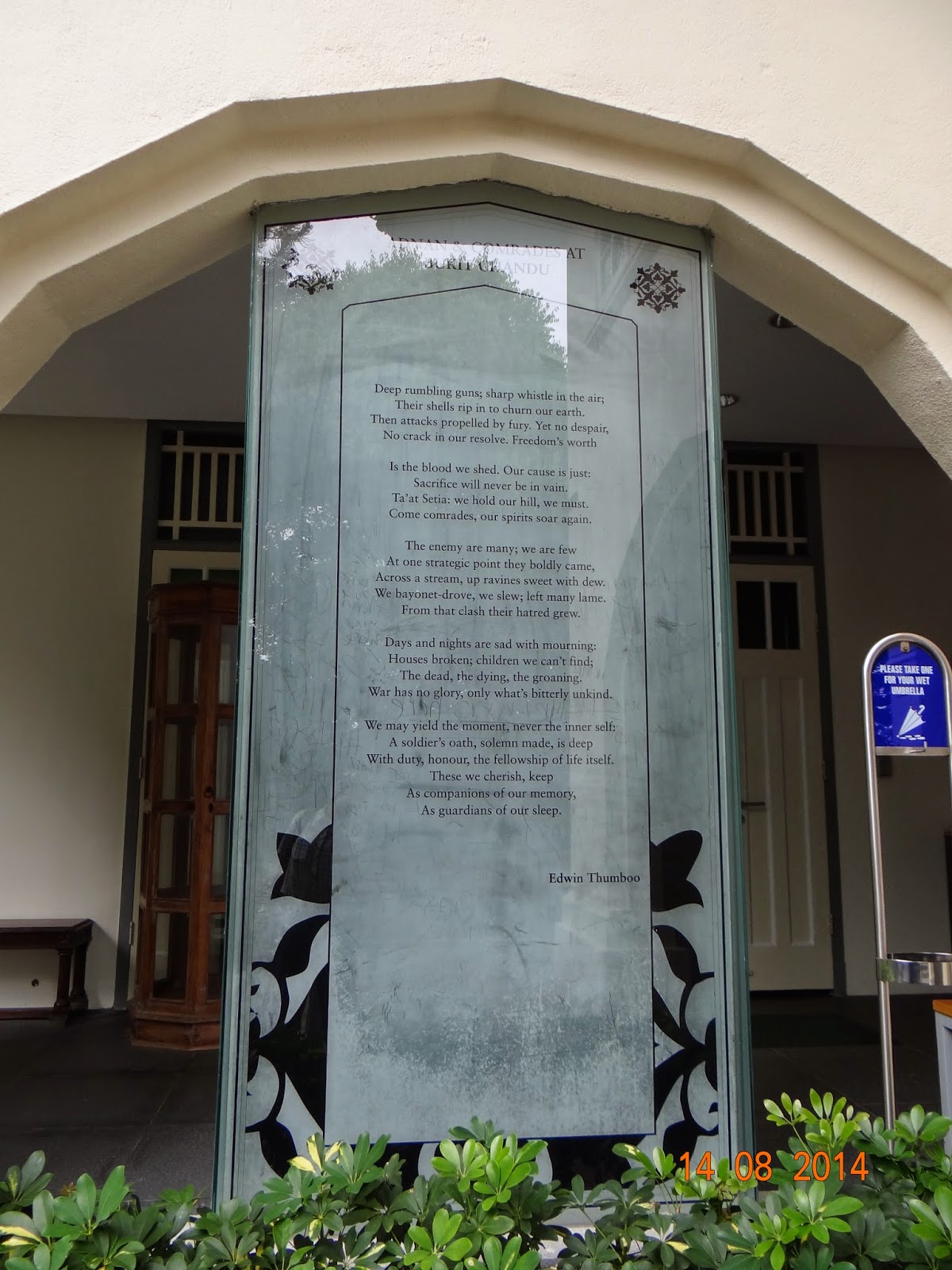 The entrance to the bungalow had a wonderful poem by the famous Singaporean poet, Edwin Nadason Thumboo, a Peranakan of Indian-Tamil and Chinese-Teochew (Oh yes, I had visited the Pernakan Museum yesterday!)

Deep rumbling guns; sharp whistle in the air,
Their shells rip up and churn our earth.
Then attacks propelled by fury. Yet no despair,
No crack in our resolve. Freedom’s worth

Is blood we shed. Our cause is just:
Our sacrifice will never, ever, be in vain.
Ta’at Setia: we hold our hill, we must.
Come comrades, duty stirs our souls again.

The enemy are many; we are few
At one strategic point they boldly came,
Across a stream, up ravines wet with dew.
We bayonet-drove, we slew; left some lame.
From that time their hatred grew.

Days and nights are sad with mourning:
Broken houses, those four children we can’t find;
And for the dead, the dying and the groaning.
War has no glory, only what’s bitterly unkind.

We may yield the moment, not our inner self:
A soldier’s oath, made solemnly, we keep.
Cherish duty, honour, the fellowship of life itself.
These are, as you who visit are,
Companions of our memory; guardians of our sleep.

Bukit Chandu was considered strategic for two reasons. It was situated on high ground overlooking the island to the north and secondly, if the Japanese gained control of the Pasir Panjang ridge, it would have given them a direct passage to Alexandra, where the British army had their main ammunition depots, supply stores, military hospital and other installations.
The battle for Bukit Chandu started started on August 13, 1942 and the defenders were led by a British officer, Captain H. R. Rix and 2nd Lieutenant Adnan bin Saidi who commanded a Malay platoon, consisting of 42 men - these were known as the C and the D companies, and were separated by a canal. Oil in the canal was set on fire by the Japanese to prevent the companies from retreating.
The Japanese were determined to capture the ridge at any cost, they restored to deception and disguise (dressing up as Sikh soldiers) to break through the Malay and British defences. When deception failed, they went all out with additional troops brought in as reinforcements, they easily outnumbered the defenders and won the battle....
Captain Rix died fighting, while 2nd Lieutenant Saidi was tortured to death after his capture.... 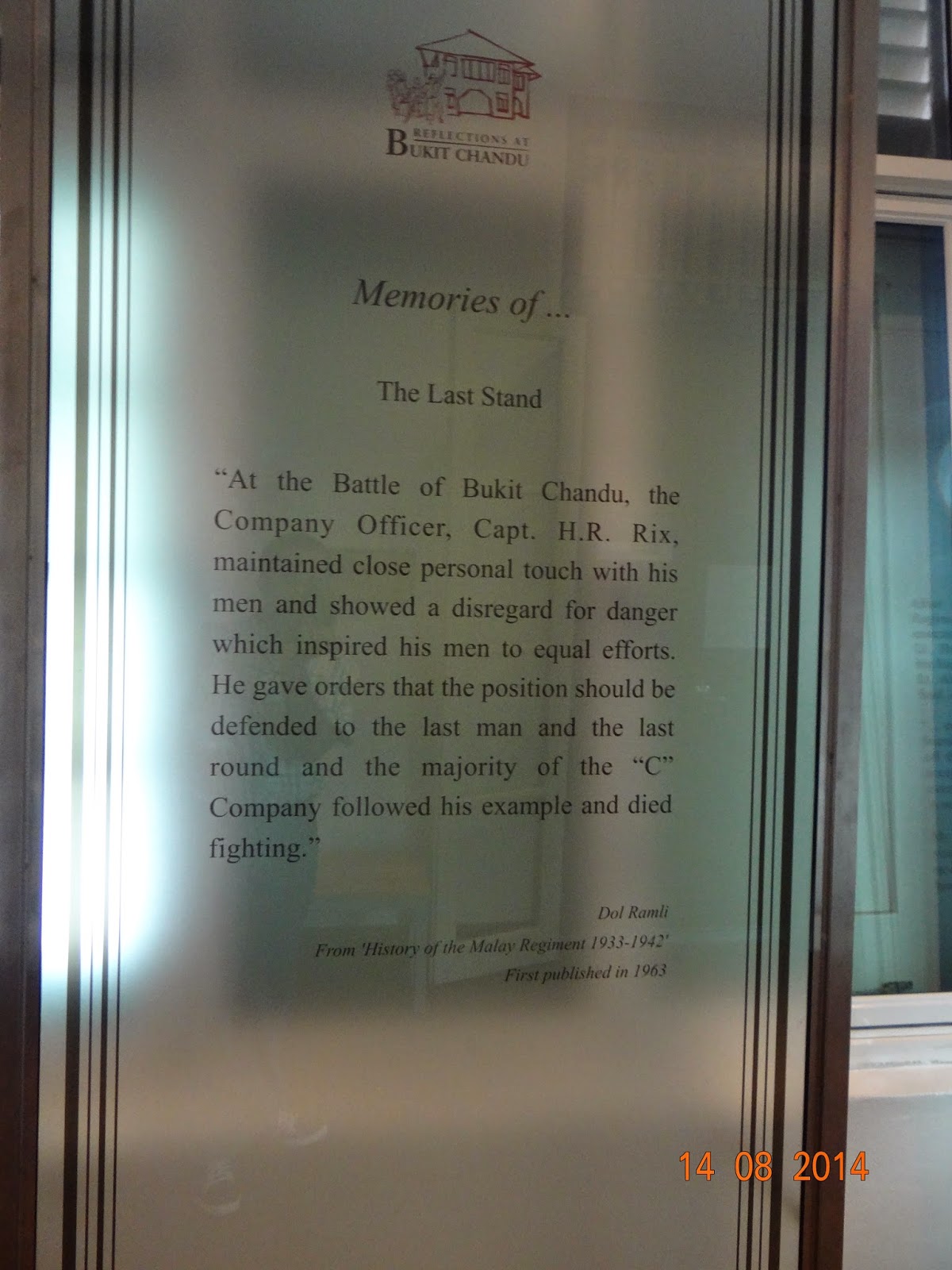 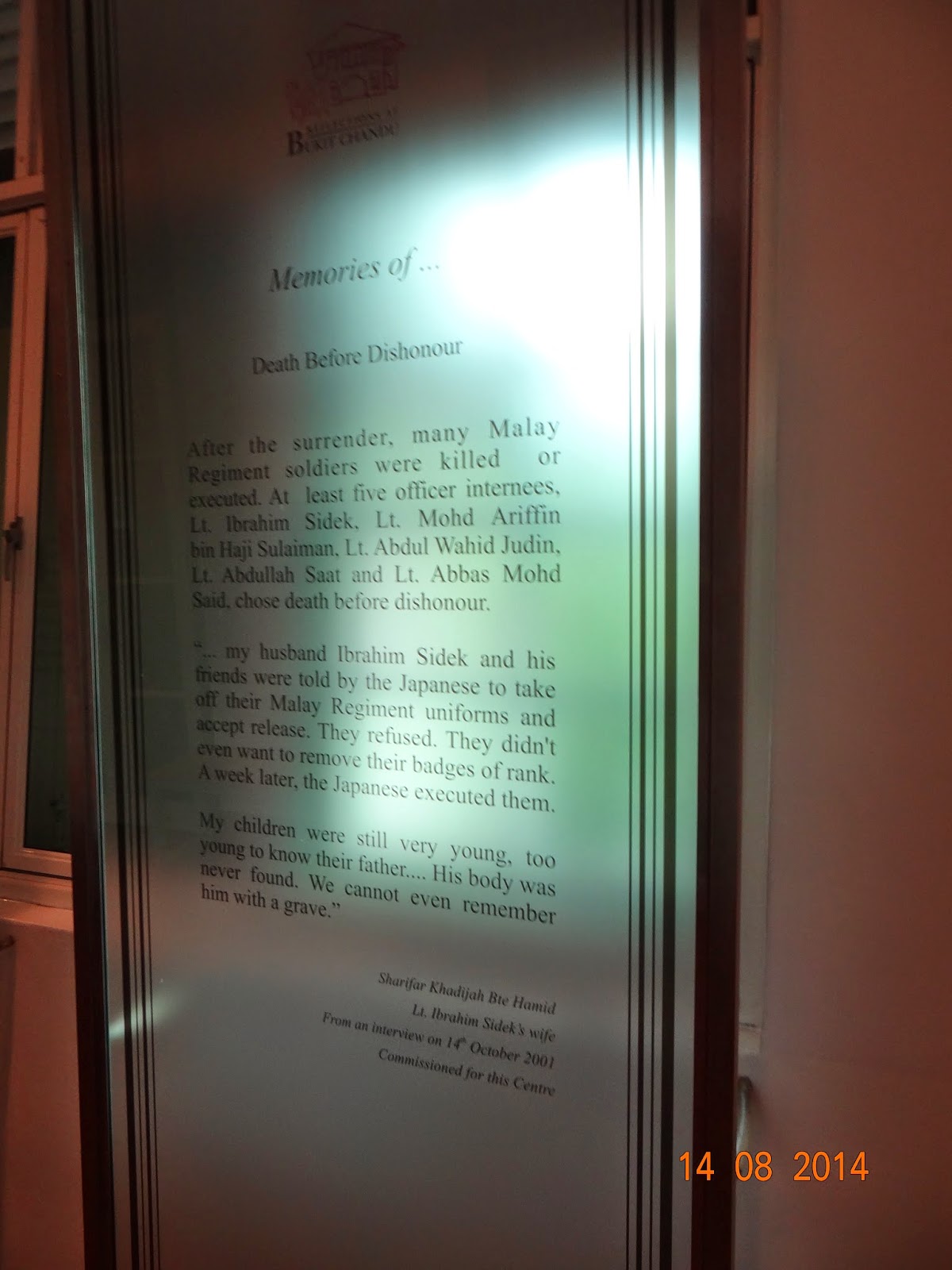 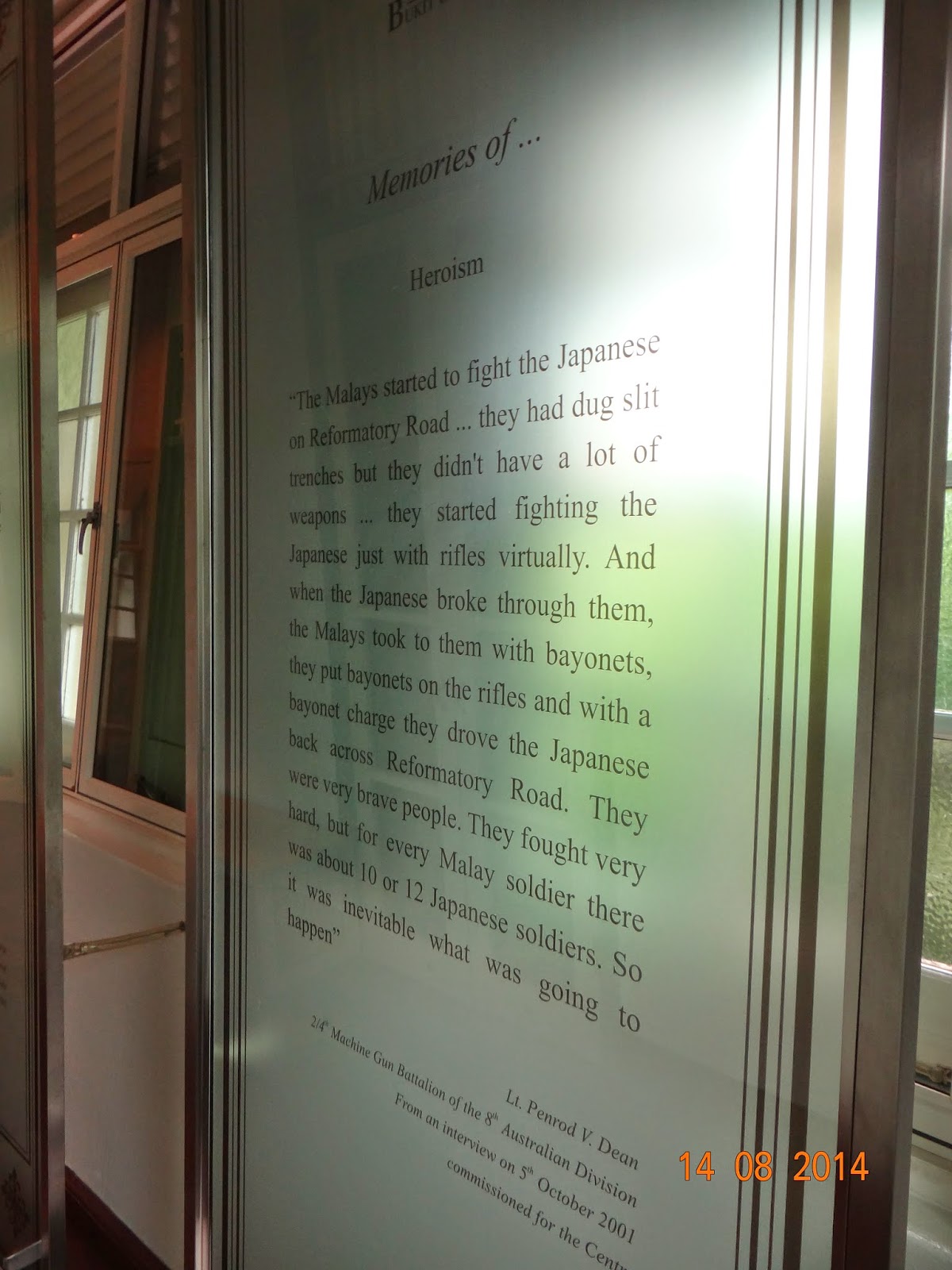 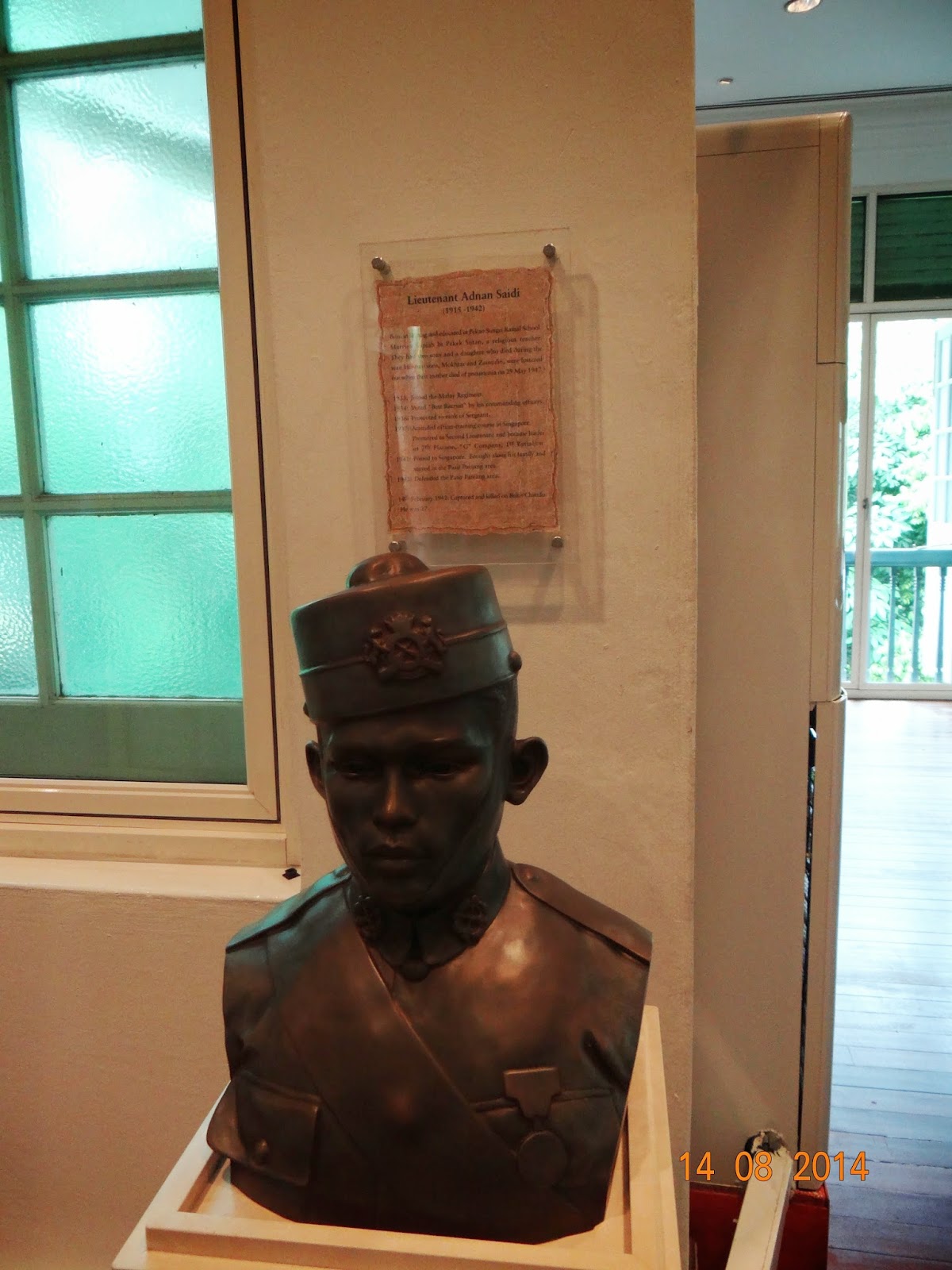 The bust of Lieutenant Saidi was a prominent display here.... 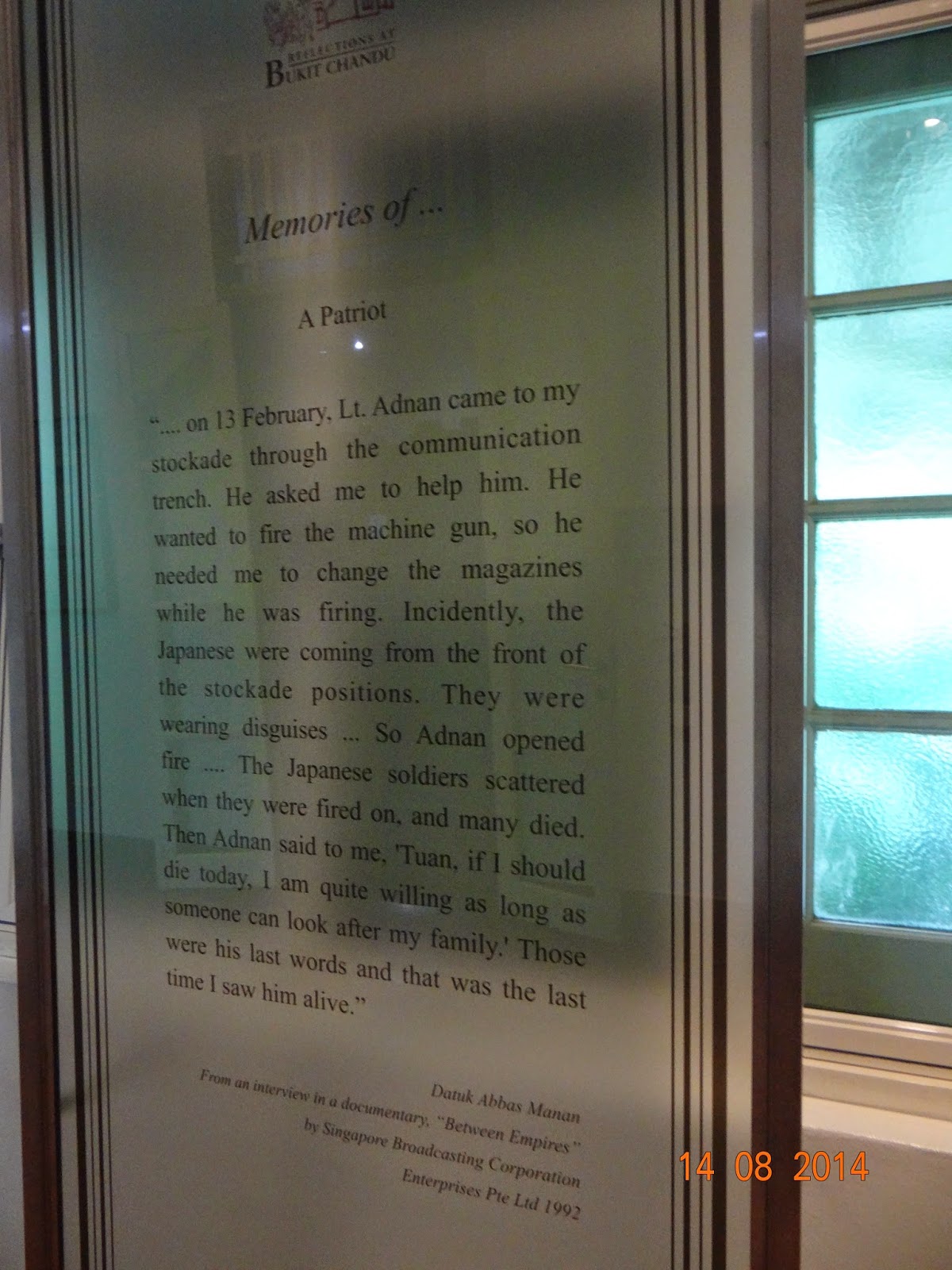 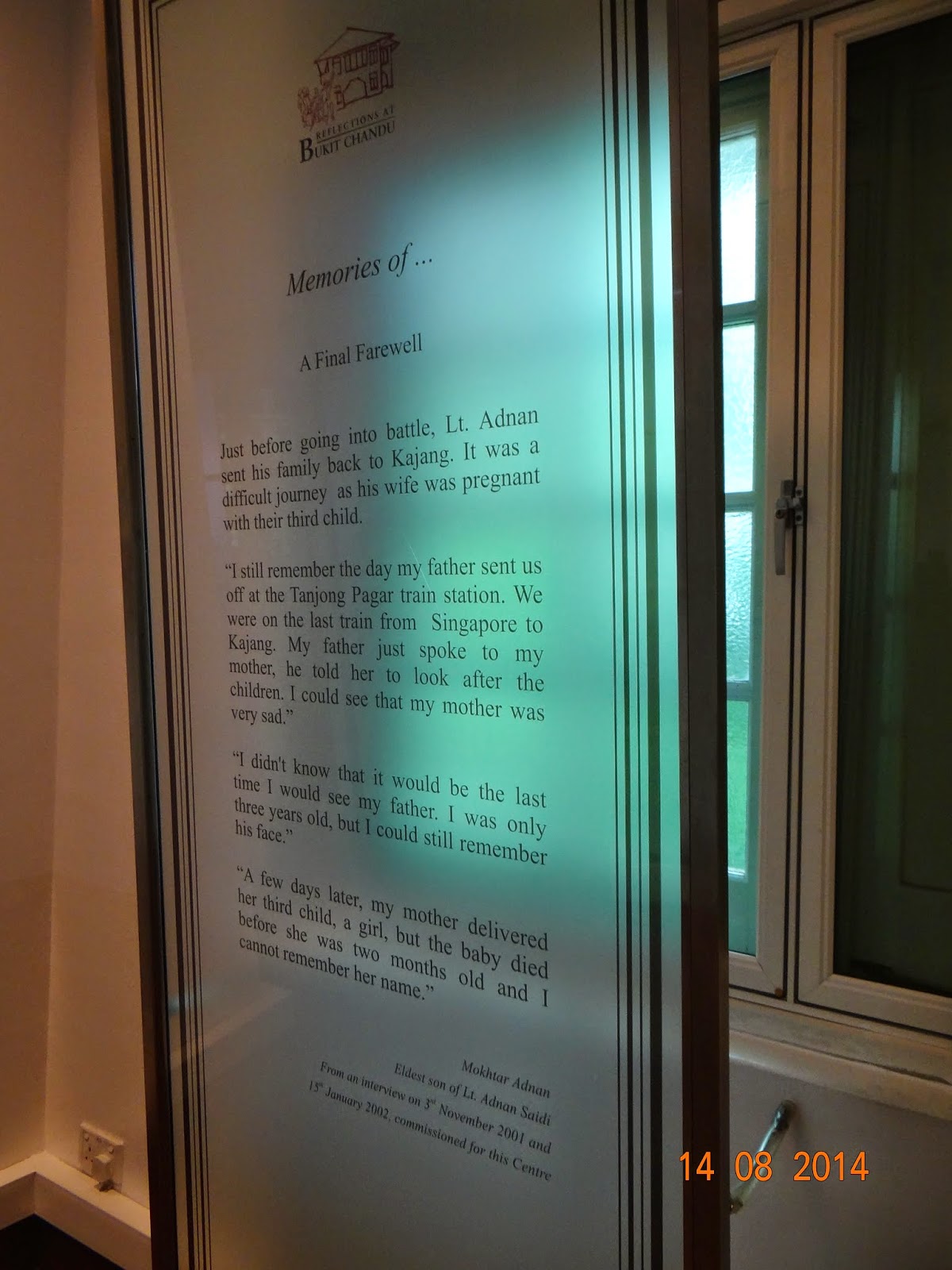 Lieutenant Saidi's chilling tale was that of personal sacrifice for the sake of the nation.... 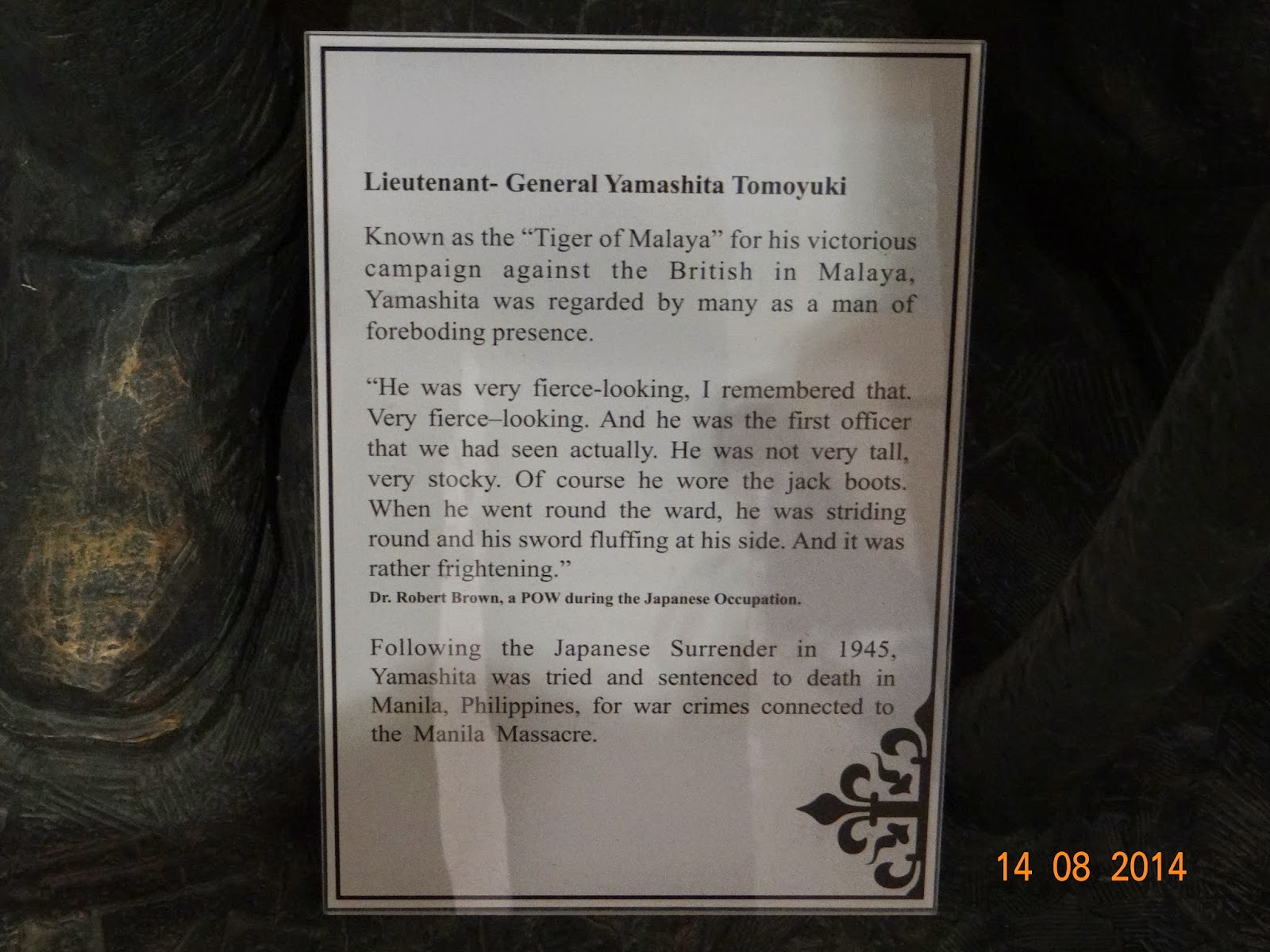 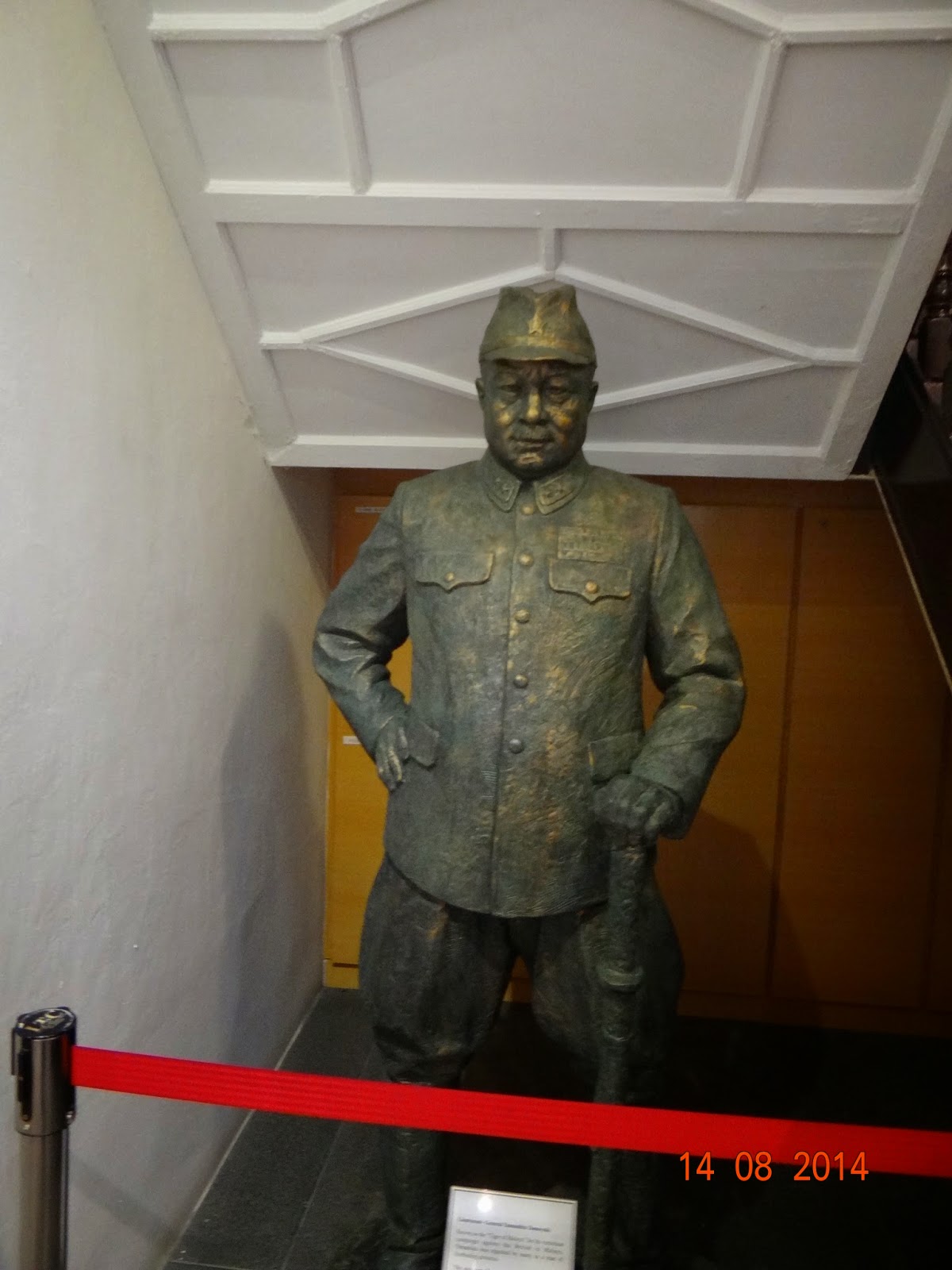 A statue of the feared Japanese commander, the Tiger of Malaya, Lieutenant General Yamashita Tomoyuki on display.... 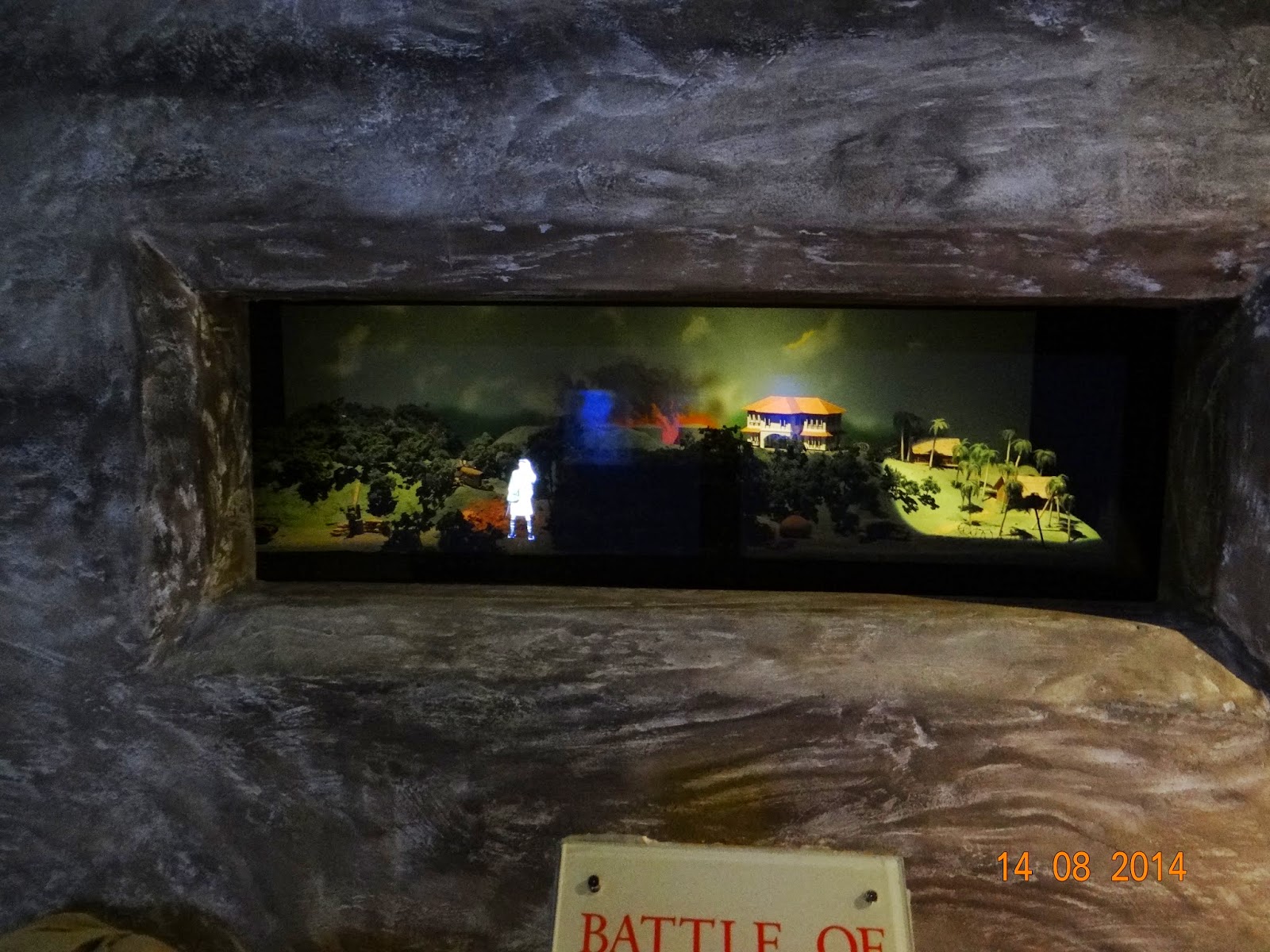 The Battle of Pasir Panjang was nicely depicted through this AV display.... 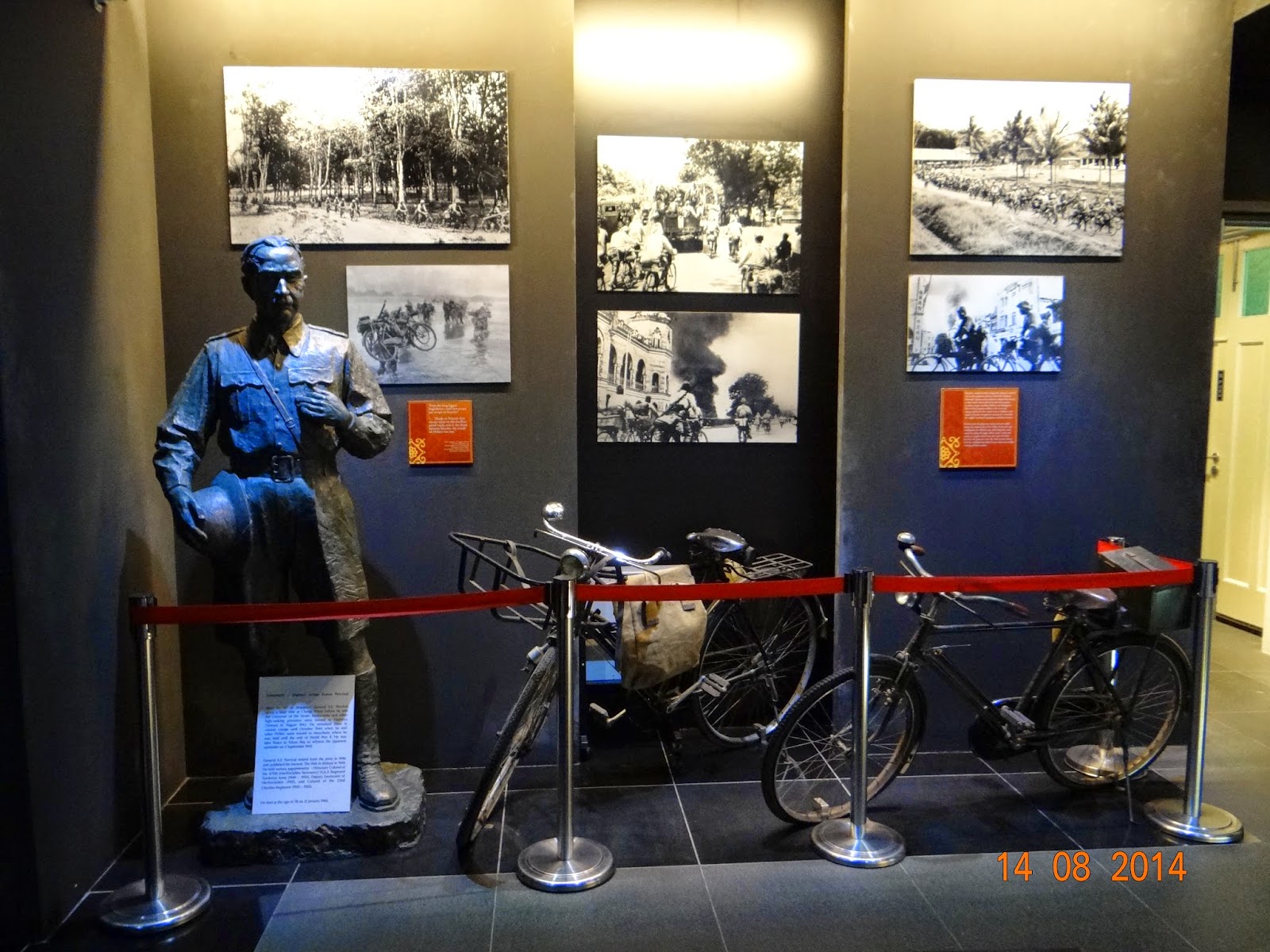 The statue of British commander in Singapore, Lieutenant-General Arthur Percival on display. After the fall of Singapore, Percival was held as POW at the Changi Prison, before he was shifted to Formosa (Taiwan) in August 1942, where remained till October 1944. From Taiwan, he was sent to Manchuria, where was held till the fall of Japan in 1945... 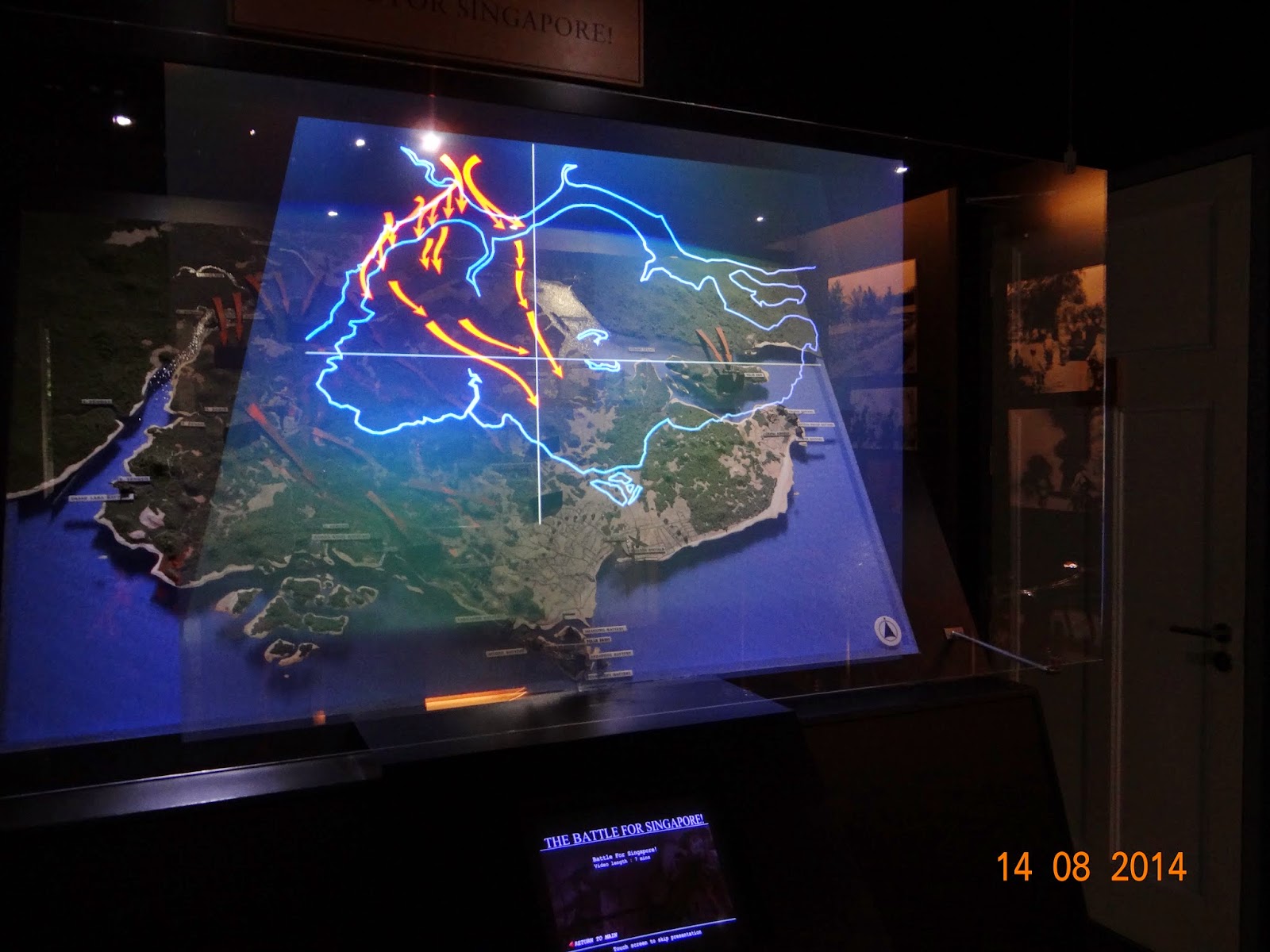 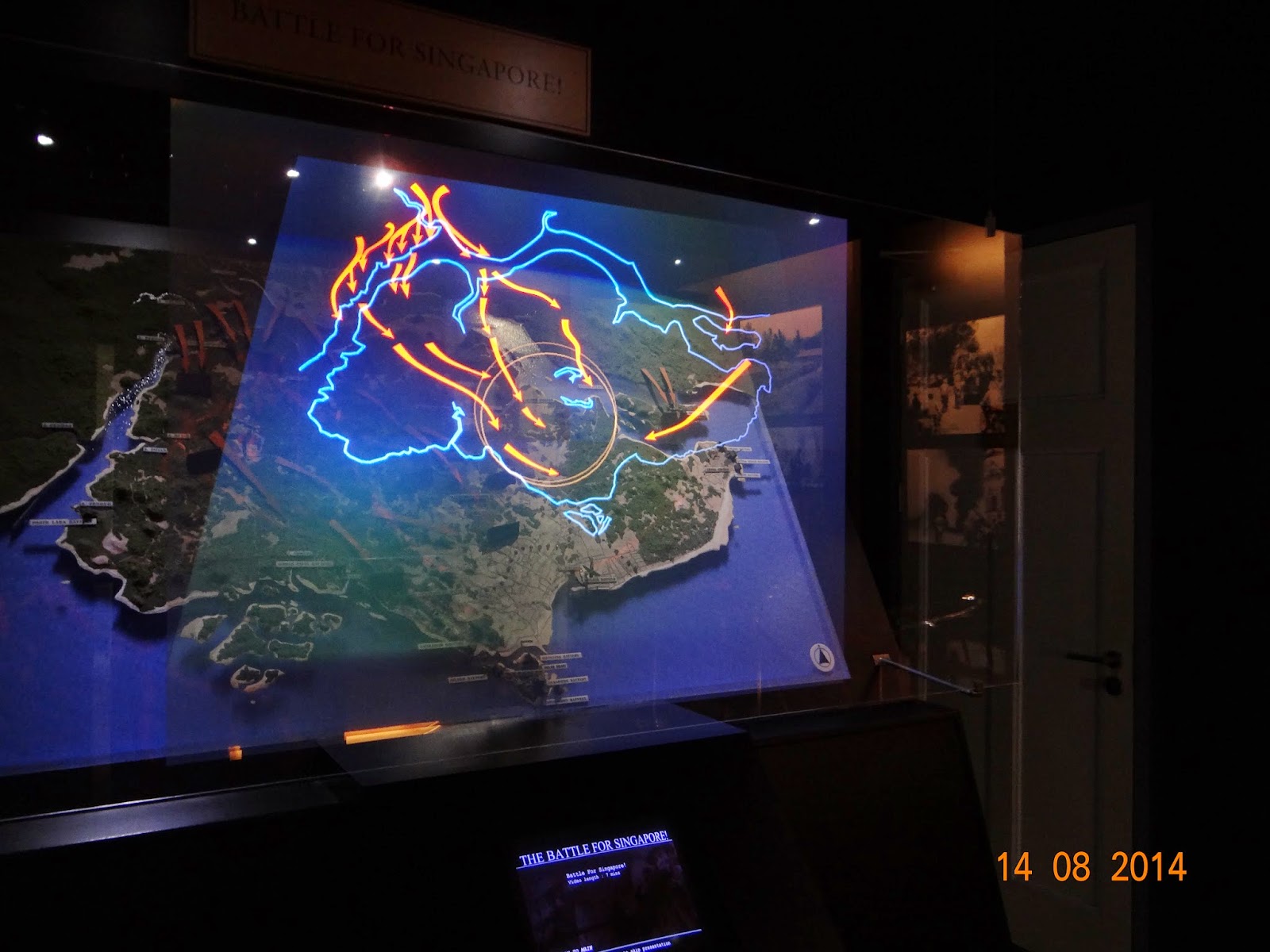 The graphics showed how the Japanese moved into Singapore... 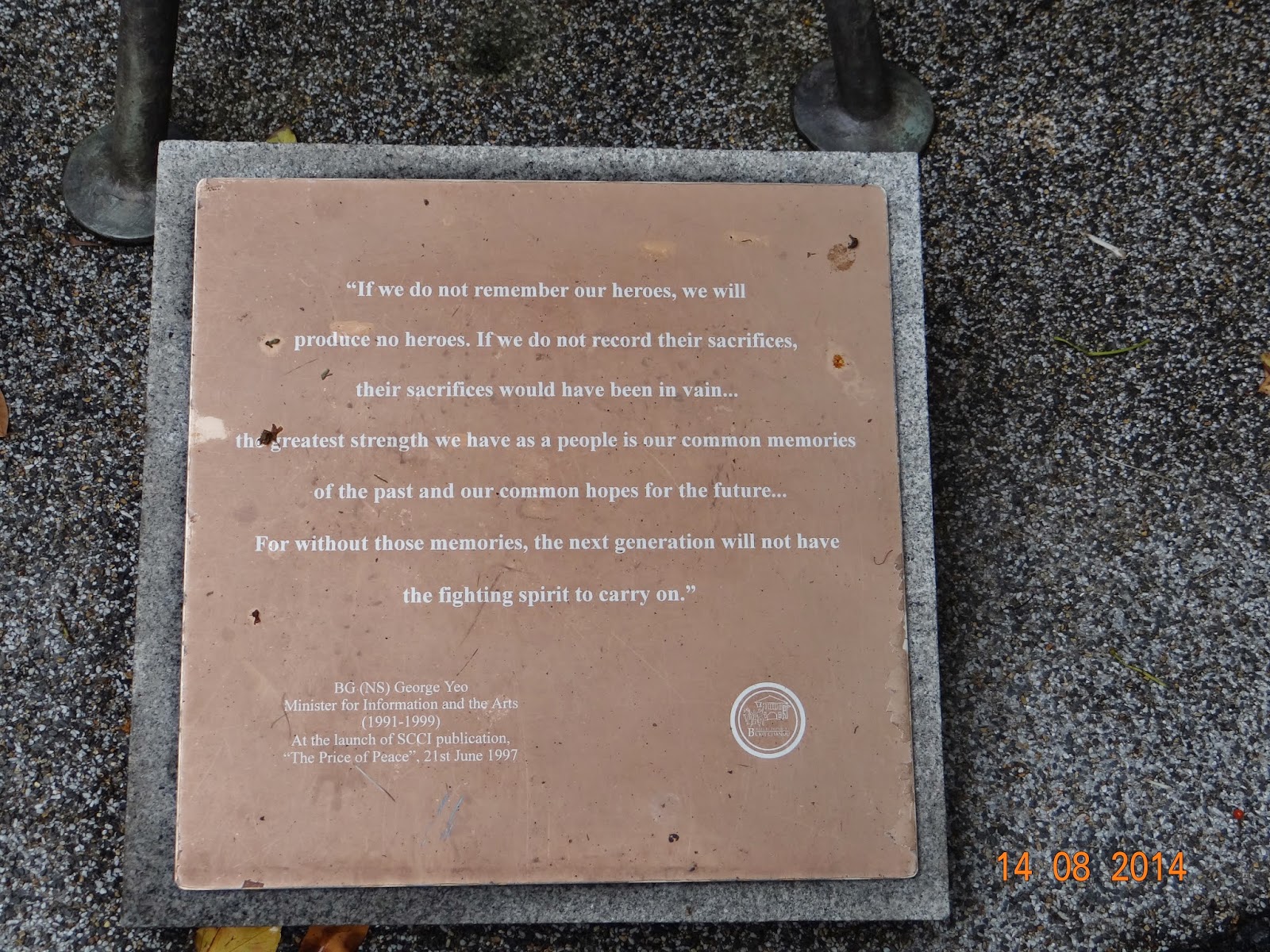 Moved by the accounts of bravery and valour shown by the troops here, I moved out of the bungalow as it was nearing closing time. Outside there was this display of soldiers loading a mortar gun, with a plaque that said:

If we do not remember our heroes, we will produce no heroes. If we do not record their sacrifices, their sacrifices would have been in vain...
The greatest strength we have as a people is our common memories of the past and our common hopes for the future...
For without these memories, the next generation will not have the fighting spirit to carry on
- BG (NS) George Yeo 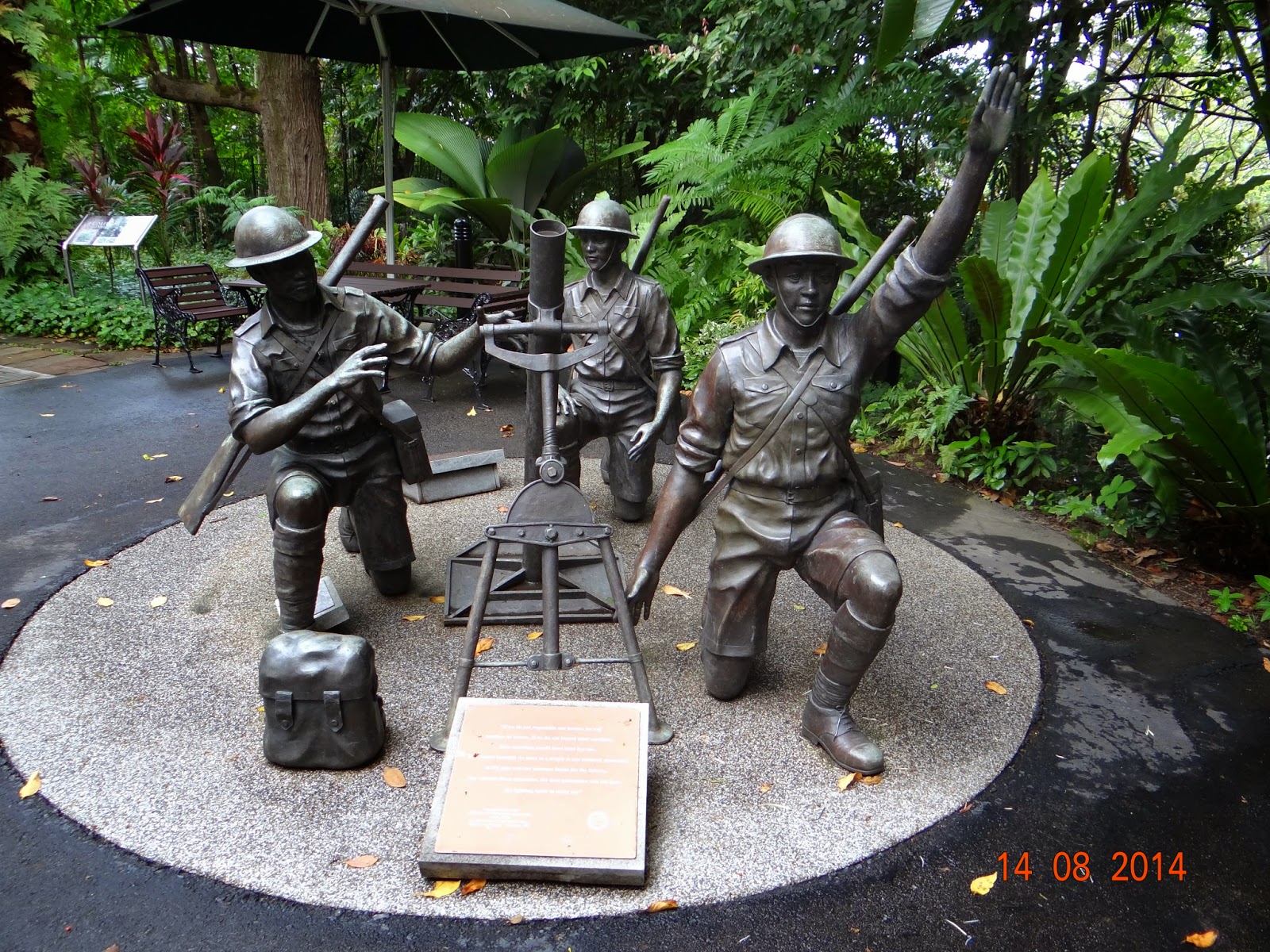 As I read the plaque, I was deeply thinking - if we respect our war-heroes this way back home in India, we would be a different country.... Just then, the security guard called out for me.... the Chinese guy who was manning the reception was leaving for the day with his Malay boss, a lady. They offered me a lift to the West Coast Highway, from where the Pasir Panjang MRT is a 5-minute walk....
I was too tired after walking the whole day in extreme humidity and heavy rain and I gladly jumped at their offer. In car, we had a stimulating discussion, they asked me about how India was changing under Narendra Modi and how optimistic and comforting they felt with the potential growth that we offer them... Their friendliness and kindness struck a chord, there was an instant friendship.....
But the friendship lasted 5-minutes and soon we reached the Highway and headed to catch a train to Novena.... It was time to call it a day.... but I will always remember the elderly, affable Chinese man and the Malay lady, very fondly....