Flying Into The District...

The 3-hour flight from Dallas Fort Worth into Washington DC's Ronald Reagan Washington National Airport (DCA) passed off in a bit of a blur, as I was extremely tired and jet-lagged, waking up for a quick bite and then immediately before landing.
The approach into DCA was quite interesting - the airport is located on the banks of the Potomac River. And for obvious reasons, given Reagan National Airport's proximity to the city and high-security facilities, such as the Pentagon which is barely just a mile from the airport periphery, there are extra security precautions required by the Washington Air Defense Identification Zone that have been in place since the airport began operations.
Prior to the September 11, 2001 attacks, the notable security measure was the southbound approach into the airport. Most of central Washington D.C. is prohibited airspace up to 18,000 feet. Due to this restriction, pilots approaching from the north follow the path of the Potomac River and turn just before landing. This approach is known as the River Visual. Similarly, flights taking off to the north are required to climb quickly and turn left to avoid the Washington Monument or the White House. (Source: Wikipedia)
Tonight, we too followed the River Visual approach into DCA's Runway 15-33, an approximation of which I have charted out in the map below... 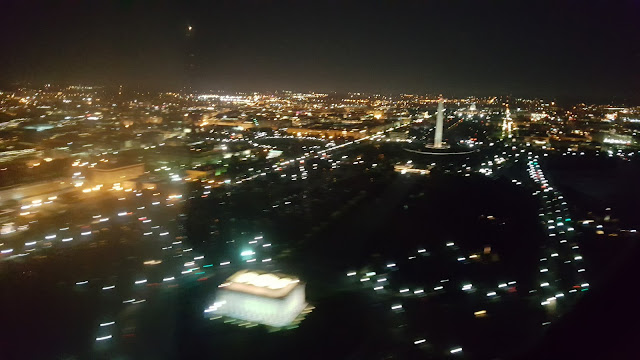 And the River Visual gave an good view of the National Mall - the Lincoln Memorial and the Washington Monument... 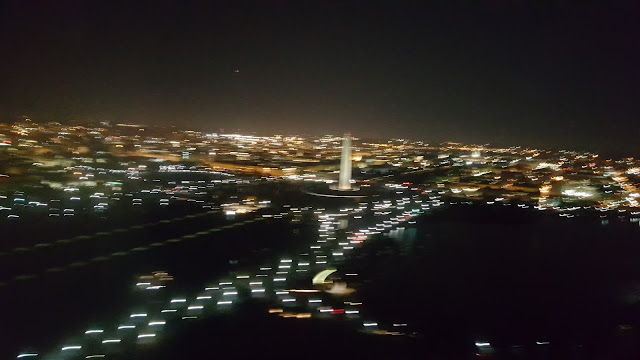 Turning right to line up for touchdown on Runway 15-33... 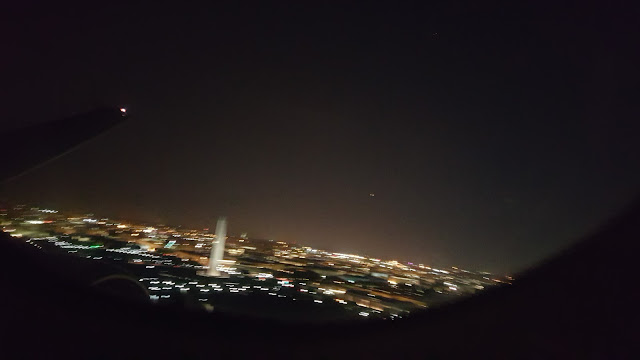 A steep bank to the right...

DCA is quite a historic airport. Close by, near the present site of the Pentagon, Hoover Field opened in 1926 - it was the first airport that had a major terminal. The airfield's single runway was crossed by a street and it had guards to stop automobile traffic during takeoffs and landings.
In 1927, another airfield - the Washington Airport, began service next door. In 1930, the Great Depression caused the two terminals to merge to form the Washington-Hoover Airport. However the airfield had limitations - high-voltage electrical wires and obstructed by a high smokestack on one approach and a dump nearby.
In 1938, President Franklin D. Roosevelt USD 15 million to build the National Airport by reallocating funds from other purposes. Construction of Washington National Airport began in 1940–41.
The western part of the airport was once within a large Virginia plantation - the Abingdon plantation. The eastern part of the airport was constructed in the District of Columbia on and near mudflats that were within the tidal Potomac River, using landfill dredged from the Potomac River.
The airport opened in June 1941, just before the American involvement in the Second World War. In 1945, the United States Congress passed a law that established that even though the airport was legally within Virginia, it would be under the jurisdiction of the federal government.
And then on February 6, 1998, President Bill Clinton signed legislation that changed the airport's name from Washington National Airport to Ronald Reagan Washington National Airport, to honor the former president on his 87th birthday.
And the creaky conveyor delivered my bags. I quickly took a taxi that got me into the far end of DC in about 20 minutes. 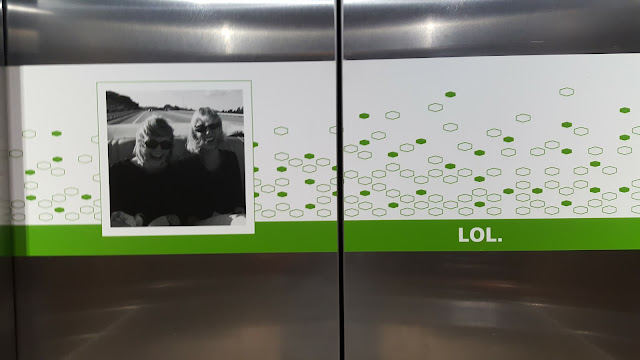 And now after a quick check in, I am in the elevator heading up to my room. And guess what - the elevator door says LOL to me! 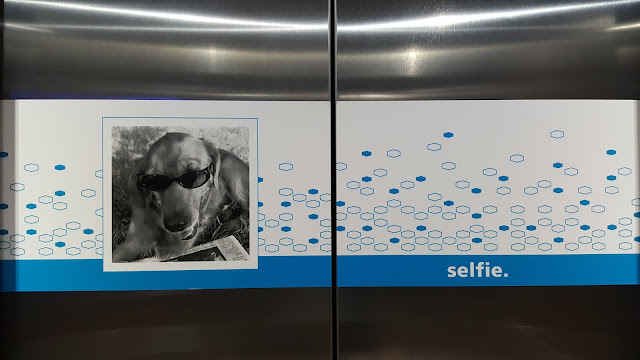