They say common sense is usually very uncommon.
This statement was proved right this week when the DGCA implemented a new rule to penalise airlines for delays in departures.
Miraculously, flight delays vanished overnight, so the newspapers wrote.
Imagine the lost manhours because of flight delays. Couldn't the DGCA think of this before?
And today I experienced that myself.
With clinical efficiency, the aircraft was filled in at least 20 minutes before the scheduled time for departure. And the pushback from CSI's Terminal 1B happened dot on time. In less than 10 minutes, we were airborne!
To my amazement we landed in Delhi 10 minutes ahead of schedule. The pilot sounded very proud to announce that we were early. Gone are the days of expressing regret on delayed landings?
This was the first time I paid attention to the landing at the new runway 11/29. The runway markers were neatly painted, the greens lining the asphalt smartly cropped. In short, the runway looked deceptively similar to the ones at Chep Lap Kok, Hong Kong!
And within 20 minutes of landing, I was in my cab. 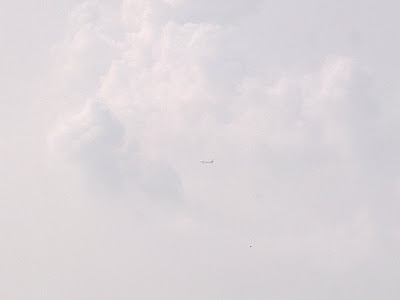 I am now waiting with a great deal of excitement to see what the new terminal T3 has to offer.
Watch out Changi, Chep Lap Kok, Suvarnabhumi and Dubai. Delhi has arrived with its impressive T3.
Surely a grand welcome awaits all who fly in for the Commonwealth Games.

But for me, the highlight of the journey was my first A2A (aircraft to aircraft, in the spotters' vocabulary) photograph clicked inflight, of a A320, either Air-India or Kingfisher!
Posted by Rajeev at 11:10 AM