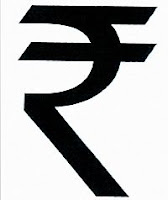 The Rupee will never be the same again...
India has announced that it would give the Rupee a symbol on the lines of the Dollar ($), Euro (€), Yen (¥), Pound Sterling (£).
Sounds great.
We do need to differentiate our Rupee from the worthless currencies of our neighbourhood, primarily the Pakistani Rupee and the Nepalese Rupee, though the Sri Lankan Rupee does not have much to be spoken about either.
Indonesia and Maldives use a derived pronunciation of the Rupee as the names of their currencies.
Beyond the Indian subcontinent, Mauritius and Seychelles have also named their currencies as the Rupee.
As a superpower, the differentiation of the Indian Rupee was long overdue, especially from the similar-sounding clones floating around in our backyard and the symbol selected would come in handy.
The government and the newspapers now talk of our Rupee's new symbol catapulting us into the big league of the Dollar, Pound Sterling, Euro or the Yen.
But is a mere symbol going to do the magic? I doubt it.
I did a quick search on Wikipedia on currency symbols and came up with a long list of some 30-odd countries that have unique (and aesthetic) symbols of their currencies. The list includes Nigeria, Vietnam, Bangladesh, Philippines, Thailand, etc. All these are countries which do not have much to be spoken about, as far as their currencies are concerned.
A symbol does not help. The Chinese Yuan's emergence as an international currency proves that. I am told Chinese Yuan travellers' cheques are now available in India. China did not need a symbol to get there, did it?
I feel it is a great symbol, a greater differentiator, a recognition of our ambitions, as a people, as a nation.
But for me India would have truly arrived when Indians would not need to convert Rupees to Dollars to travel abroad, when the Indian Rupee becomes the preferred currency of exchange globally, like the way the Dollar is today.
That is a realistic scenario, perhaps 20-30 years from now.
Posted by Rajeev at 10:46 PM