I was shocked to read today's Wall Street Journal, which had an article on the defence spending of Greece. 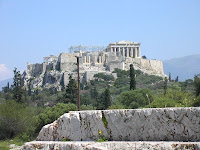 The article said that Greece ranks fifth in the world in defence spending behind China, India, the UAE and South Korea (are we missing out the United States and Russia here?), is the largest importer of conventional weapons in Europe and has had the highest defence spending in Europe as a percentage of its GDP over the last few years.
The irony of it all is that the Hellenic defence had been dependent on Germany and Germany is executing orders for 6 submarines costing billions of dollars, but Germany has been extremely critical of Hellenic fiscal profligacy.
Why does Greece need so many weapons?
It has a small population of just 11 million (perhaps just two-thirds of Greater Bombay).
Unlike, India or South Korea, Greece has no real enemies perhaps with the sole exception of Turkey. Possibilities of a conflagration with Turkey are remote, as both are NATO members.
Greece is no where close to having superpower ambitions like China, nor does it have petrodollars like the UAE.
Can or rather will those weapons ever be used?
Does this have something to do with kickbacks usually associated with political-military-industrial nexuses that virtually exist in every country?
But this cost the Greeks a lot. Its a Greek tragedy indeed.....
Posted by Rajeev at 11:58 PM