And I'm finally here, right here in the middle of the Pacific, in the Independent State of Samoa.
The country has an interesting history. The country is a part of the Polynesian region of the Pacific and has two main islands - Upolu (the island I am on) and Savaii. It is believed that the Samoan islands were first inhabited nearly 3500 years back by people from South East Asia and Melanesia.
The Europeans came to Samoa in the early 18th century. It is believed that the Dutch, led by Jacob Roggeveen, were the first to come here in 1722. They were followed by the French explorer Louis-Antoine de Bougainville, who named them the Navigator Islands in 1768.
And then in the 1830s, the English missionaries and traders began arriving. At that time the Samoans were known to engage in "headhunting", a ritual of war in which a warrior took the head of his slain opponent to give to his leader, thus proving his bravery.
Then the Germans came in with an idea to exploit the commercial potential of Upolu. German firms monopolised copra and cocoa bean processing. That got the Americans interested who laid their claim on the islands of Tutuila and Manu'a which became American Samoa.
The British upped their stakes by sending in troops to protect their business enterprises, harbour rights, and consulate office. The colonial machinations provoked an eight-year long proxy civil war, during which the Germans, Americans and the British supplied arms, training and combat troops to the warring local Samoan chieftains. In March 1889, the crisis intensified when all three colonial contenders sent warships into Apia harbour, and a larger-scale war seemed imminent. By nature's providence, a massive storm struck on March 15, 1889 damaging and destroying the warships, ending the military conflict.
A few years later, another conflict broke out between local groups. Things came to a boiling point in 1898 when a local chieftain, Prince Tanu, supported by the Americans and the British were challenged by a large group of rebels supported by the Germans. American warships shelled Apia and the rebels were defeated. Talks followed in 1899 and under the agreement, the British vacated their claims on Samoa in return for Tonga, Solomon Islands and territory in West Africa. Germany got Upolu and Savaii and the Americans got the modern-day territory of American Samoa!
The period between 1900 and 1914 was quite peaceful under German rule, but then the First World War broke in Europe, and at Britain's request, a contingent of troops from New Zealand occupied Upolu and Savaii. The occupation by New Zealand was formalised under a League of Nations trusteeship mandate that lasted till 1962. The colonial rule by New Zealand was a bit disastrous and Samoa was impacted by unrest. protests over colonial rule, economic turmoil and an influx of diseases due to the breach of quarantine regulations by colonial ships.
In 1962, Samoa got its independence as was called as Western Samoa till it changed its name to the Independent State of Samoa. Samoa follows a unique system of government led by a titular head of state called the O le Ao o le Malo elected from the regional paramount chiefs while the executive is headed by the prime minister.
Despite its small size, Samoa does seem to be a pretty interesting place and I am all set to see whatever little I can in the five days here! 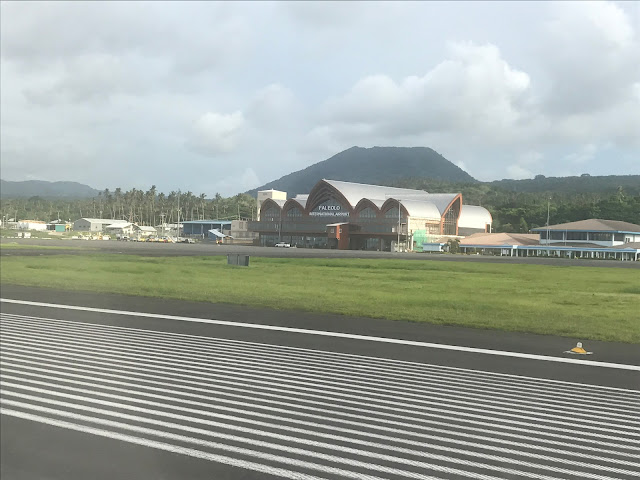 The airport is pretty tiny and rudimentary and the fancy new terminal building (it opened earlier this month) is modelled on the shape of a fale, a traditional Samoan house... 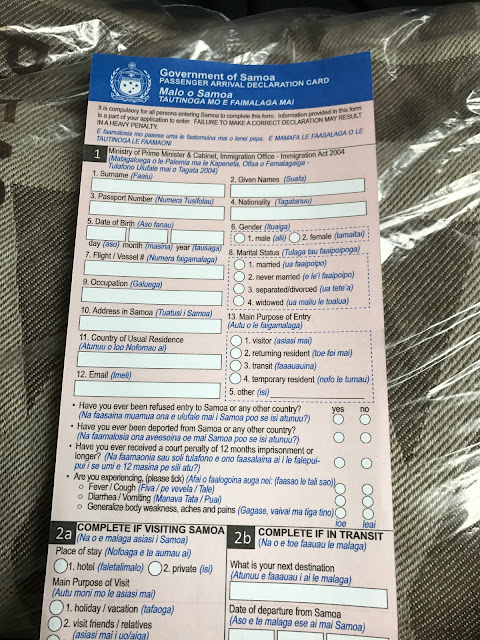 The airport is designated as Apia or APW but is actually in a village called Faleolo and that gives it its formal name Faleolo International Airport. It was a revelation that Apia city is actually 40 kilometres from here...
For long Faleolo airport didn't have neither the runway nor terminal facilities to accommodate larger longrange jets, so passengers bound for Samoa had to fly to Pago Pago, Tafuna in American Samoa and had to change planes from there. But the development of the airport facilities here have allowed for direct flights to Apia from such places as Fiji, New Zealand, and Australia, without requiring a connection on the American side. 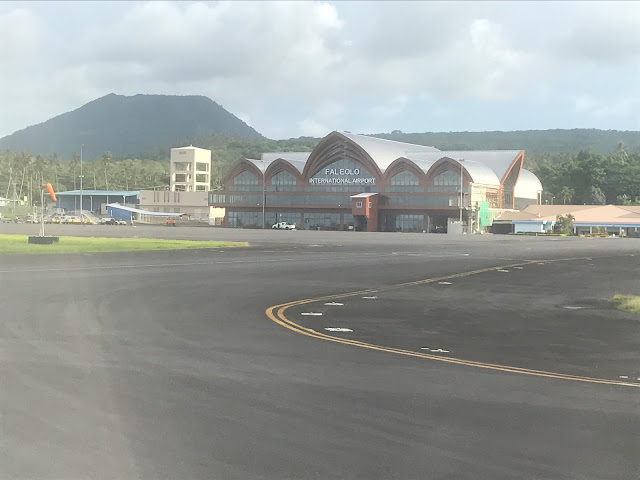 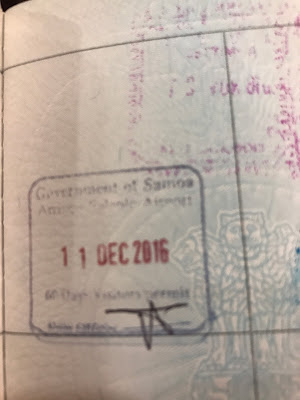 The entry stamp on my passport. Immigration clearance here was super easy and very friendly. Instead of an intimidating and grumpy immigration officer, there was a friendly chap with a 100 watt smile, that is so common to the Pacific...

Samoa has a very friendly immigration policy - people of all nationalities are welcome without a prior visa, except nationals of American Samoa. who need a pre-authorisation!
And my transport to Apia city is waiting. I have to collect my bags, convert money and then rush into Apia...