Kapalıçarşı, or the famed Grand Bazaar was our next pit stop on our journey through the wonder that is Istanbul.
We took a tram from the Sultan Ahmet station, which is a short distance away from the Hippodrome. And then a funny thing happened. In the confusion to figure out which tram to take to get to the Grand Bazaar, while Neeti was inquiring, I got on to the first tram which came in. Once the tram started, I realised Neeti was left behind. My fellow passengers told me the tram was indeed headed to the Grand Bazaar.
I immediately called Neeti and she boarded the next tram, while I waited for her at the Beyazıt-Kapalıçarşı station. 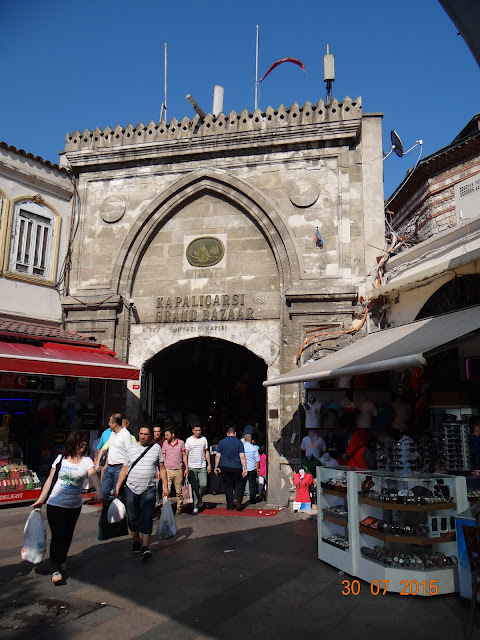 Constantinople has had an interesting history with intrigues of history, intermingling civilizations and  the East West trade all coming together here...

As one of the significant nodes of the legendary Silk Route, Istanbul for long had been a trading centre, with traders from the West and the East meeting here and exchanging their wares. That spurred the development of markets here.
In fact there is an interesting account of how this city had been linked to the trade on the Silk Route. The Byzantine Greek historian, Procopius, spoke of two Nestorian Christian monks who were sent as spies into China through the Silk Route by the Byzantine Emperor Justinian, who ruled Constantinople in the 6th century AD.
The monks eventually uncovered how silk was made. They managed to steal silkworm eggs and this resulted in silk production in the Mediterranean,  giving the Byzantine Empire a monopoly on silk production in medieval Europe. 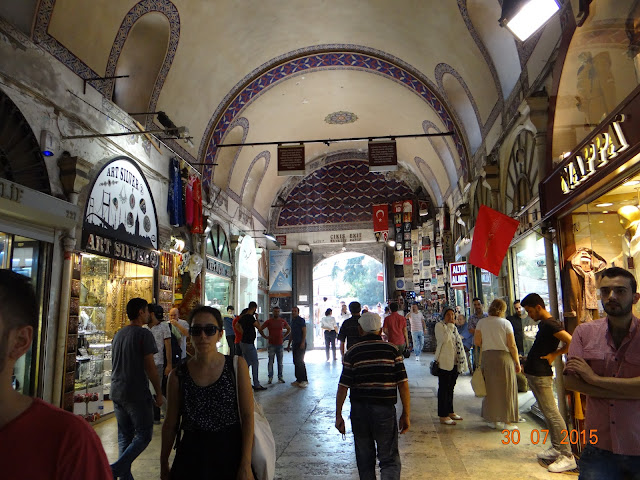 The construction of the Grand Bazaar started in 1455, shortly after the Ottoman conquest of Constantinople. Sultan Mehmet II had constructed a stone building (bedesten) for trading of textiles. This was more like a wholesale market or an exchange replacing the unorganised fashion in which trade was conducted under the Byzantines. This was called Cevâhir Bedesten (Bedesten of Gems). Another bedesten, Sandal Bedesten, also came up and these two exchanges became the hub of Istanbul's commerce. They housed stalls and shops were built around them. The lanes between the shops were covered for the convenience of shoppers. These bedestens suffered damage from earthquakes and fires over the three centuries until they were redeveloped around 1700, in the form that we see today. And it got its name - Kapalıçarşı or the Covered Bazaar. 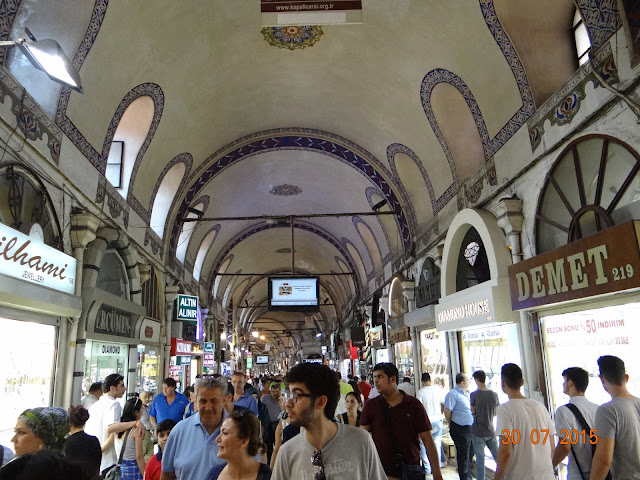 The importance of the market grew with the growing influence of the Ottoman Empire over three continents - Asia, Europe and Africa. The Ottomans virtually got a stranglehold over the Silk Route controlling the flow of goods into Europe. 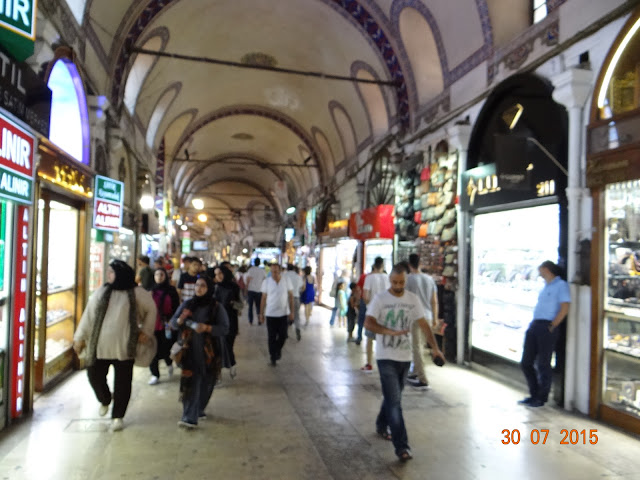 The market has over 3500 shops and employs over 25,000 people. The traders here have for long coalesced into a close-knit community and theft here was rare despite the volume of trade in luxury goods. An English traveler mentioned in 1870 that the riches here could "easily ruin a few Rothschild families", despite this the bazaar was regarded as very secure. 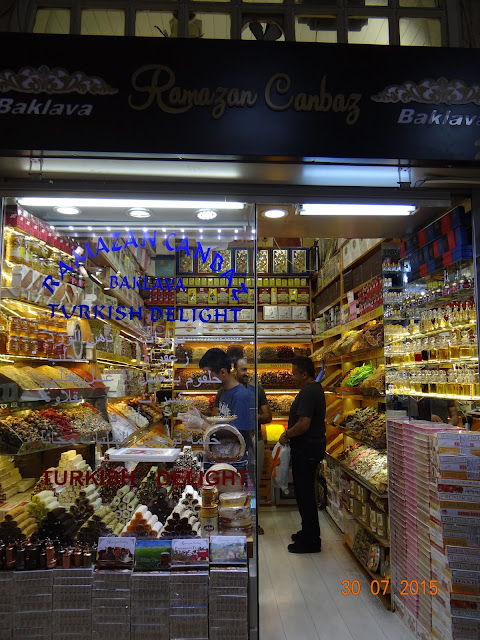 A baklava shop in the Kapalıçarşı... 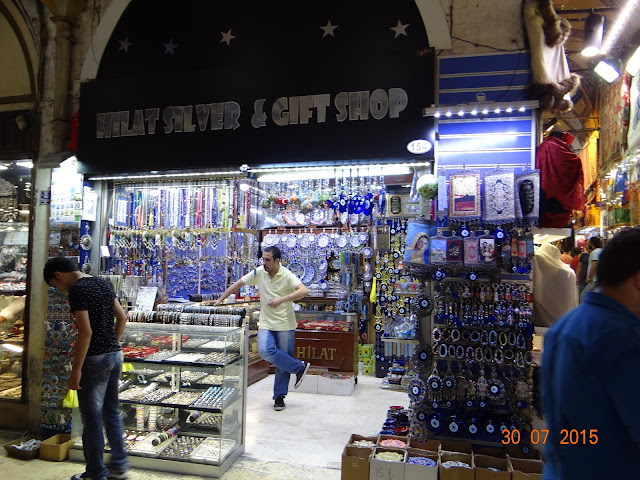 The Kapalıçarşı is home to shops selling souvenirs, curios, rugs, gems and jewellery... 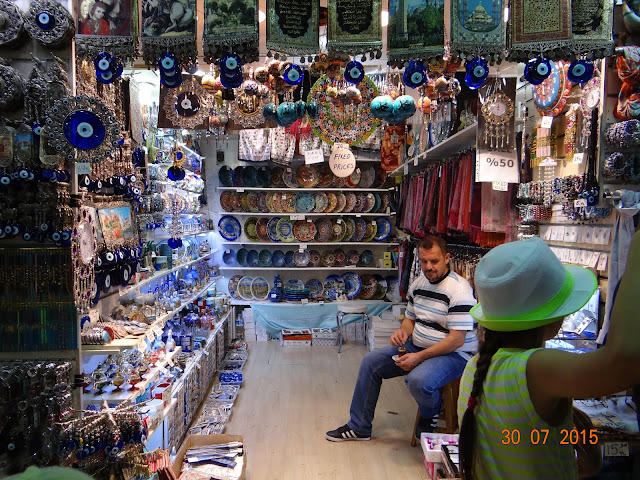 It was at one such shop, we we decided to buy gifts for friends and family - Turkish pottery. And the shopkeeper was unwilling to negotiate initially. When he figured we were from India the tone of the conversation changed. He started talking of Bollywood, Indian music and food. And yes, he was willing to negotiate now. It was the first time we, personally, benefited from India's soft-power! 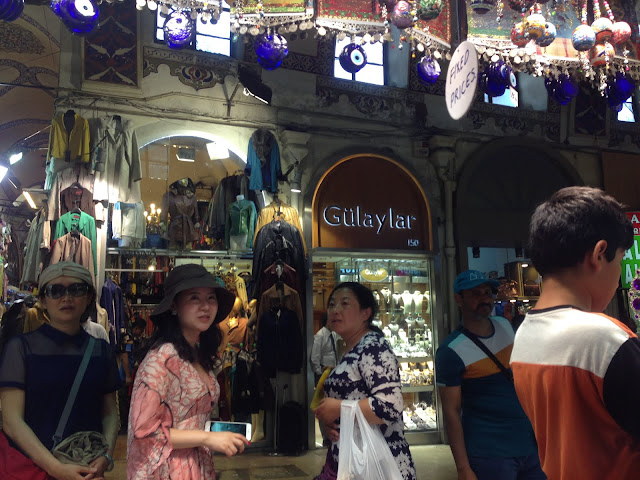 As we were checking out other stuff in the same shop, we came across an interesting shawl. Hoping we would buy that too, he exclaimed - "Ahhh, pashmina from Kashmir, Pakistan!"
The patriotic Indian within us woke up with a big jolt. Kashmir in Pakistan is almost like blasphemy for any self-respecting Indian. And we pointed out to the shopkeeper how his world-view was a bit off-track. Kashmir is very much Indian, given the long history behind it. He did look a quite bewildered - probably this was the first time he had heard this view as opposed to the views he would have heard from the hordes of Pakistanis visiting Istanbul.
Happy with our bargain hunting, we headed to our next destination - Sirkeci!