After yesterday's longish tour of the museums in Paris and a walk through the Île de la Cité, I returned back to this lovely city from Fontainebleau. My itinerary for the day involves a walk though the Jewish quarter of the city called Le Marais, a walk around Île de la Cité again and then a tour on the hop-on hop-off Big Bus.
After getting off the train from Fontainebleau, at Gare de Lyon, I took the metro to take me to the Hôtel de Ville metro station from where I walked down to the Marais district. In the 1600s, Marais was home to French nobility.
With development of the opposite banks of the Seine in the 1700s, most nobles, moved to the Faubourg Saint-Germain area, in the vicinity of Les Invalides and Hôtel Biron (Musée Rodin), Le Marais became popular with Jewish communities.
At the end of the 19th century, Le Marais attracted Ashkenazis - Jews from Eastern Europe. Naturally this area was targeted by the Nazi invaders during the Second World War.
Today, Le Marais is teeming with life with a bustling art scene. The area is home to art galleries, boutiques and cafes. The art scene in the Le Marais received a further impetus when the Centre Georges Pompidou was set up in the late 1970s to house modern French art.
With each step in Le Marais, I could feel the artistic energy of the place. But there was a heightened security presence owing to the presence of Jewish institutions in the area. And the heightened sense of security was evident when I entered the Musée d'Art et d'Histoire du Judaïsme - the Museum of Jewish Art and History. I had to go through a metal detector and an armoured door to enter the premise.
The Museum is housed in a mansion called the Hôtel de Saint-Aignan. Originally built as a mansion in the 1600s for a French diplomat and nobleman, Claude de Mesmes, the Count of Avaux. The mansion changed hands and was redesigned and renovated multiple times till the 1800s when it housed commercial enterprises except on the top floor, which was used by local Jews as their residences.
The mansion had its share of tragedy during the Second World War - in 1942, several inhabitants of the building were arrested and deported to Nazi concentration camps, where thirteen of them died. After the war, the mansion was acquired by the government and in the 1980s, it was converted into a museum. 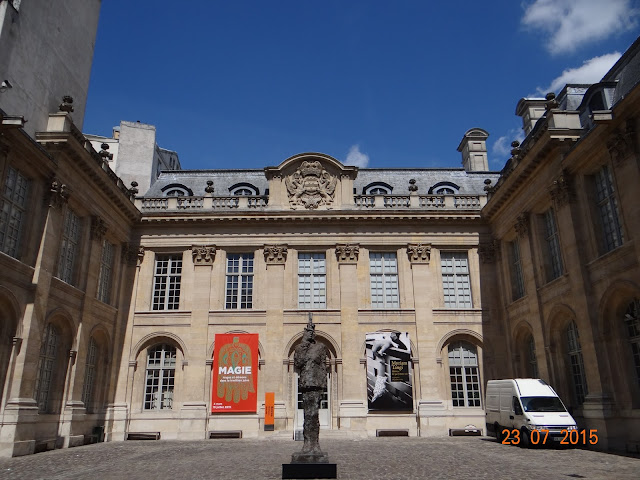 The courtyard of  Hôtel de Saint-Aignan... 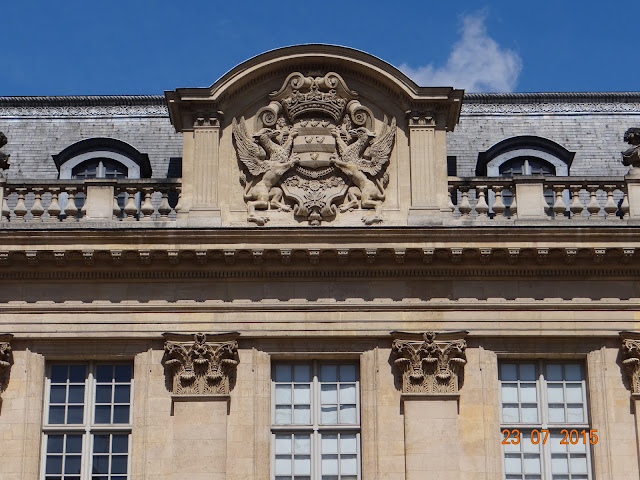 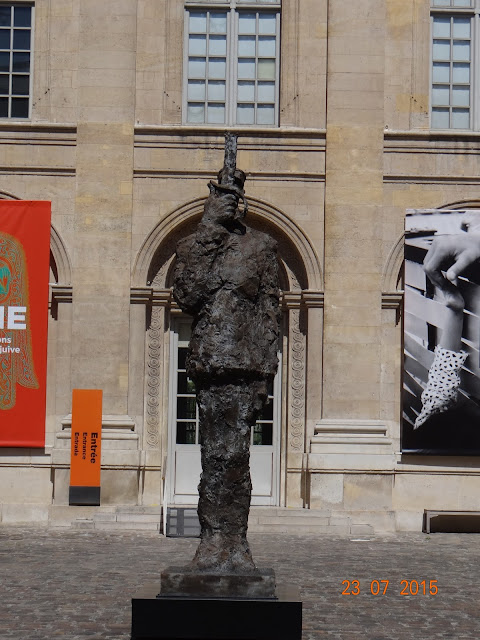 A sculpture in the centre of the courtyard... 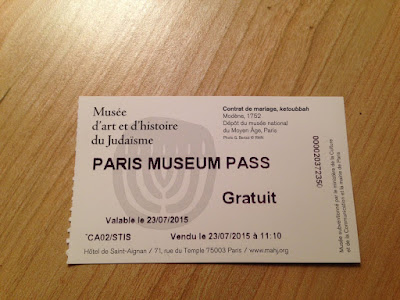 My Paris Pass gives me free access to the museum... 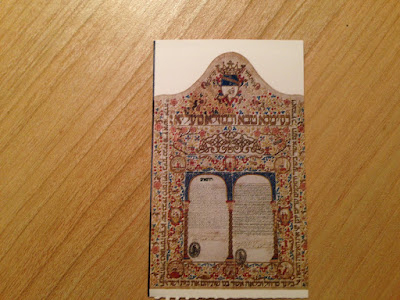 The museum showcases the evolution of the Jewish diaspora in Europe through their artistic and cultural heritage. The museum lays a special emphasis on the history of the French Jewry since the Middle Ages as well documenting the influences of Jewish communities of the Iberian peninsula, Italy and North Africa. Sadly, for security reasons photography in the museum was not permitted.
The museum is home to several treasures. Notable among them are four rare artifacts, a Hanukkah lamp, a wedding ring, an alms box and a seal, dating from before the Jews' expulsion from France in the 1300s following Philippe le Bel's and Charles VI's edicts.
The Spanish inquisition of 1490s was covered in great detail. The exhibits explained how the Jews were forcibly converted by decree or were expelled. Many of those who were converted continued to practice their faith in secrecy and were called the Marranos.
The museum documented the story of one such Marrano, Gracia Mendes Nasi - a wealthy widow who exerted pressure on the Portuguese, the French, the Spanish and the Holy Roman Empire to ease the persecution of people secretly following the Jewish faith. She created an escape network to help thousands of persecuted Jews flee from Europe to the Ottoman held Turkey and Greece - the Sultan was on good terms with Gracia and welcomed these immigrants. In retaliation to the burning of Jews on a stake, Gracia organized a trade embargo against the Papal States crippling them economically.
Besides Western Europe, the museum has sections dedicated to artworks, artifacts, manuscripts, textiles and religious objects of the Ashkenazis of Eastern Europe and Sephardic Jews from the Ottoman Empire, Maghreb and the Middle East.
One of the prized collections in the museum pertain to the Dreyfus Affair - which involved the improper conviction of Captain Alfred Dreyfus, a young French artillery officer for treason. It was later discovered that the army officer had been framed and this was a case of blatant antisemitism. The case divided French opinion, embittered politics and encouraged radicalization.
Indeed the museum stands testimony to resilience and indomitable spirit of this much persecuted community and is a must visit if you happen to be in Paris...