The Hippodrome of Constantinople...

After exploring the Aya Sofya and the Sultan Ahmet Camii, we headed to the open space between the two landmarks, which used to be sporting and social centre of Constantinople during the Byzantine Empire.
Since the venue was used for chariot and horse racing in the Byzantine era, it was called the Hippodrome. The word Hippodrome comes from the Greek word for horse - hippos (ἵππος) and dromos (δρόμος), meaning path or way. It is for the same reason the Ottomans called it the Atmeydanı ("Horse Square").
The Hippodrome has since been renamed as the Sultanahmet Meydanı. 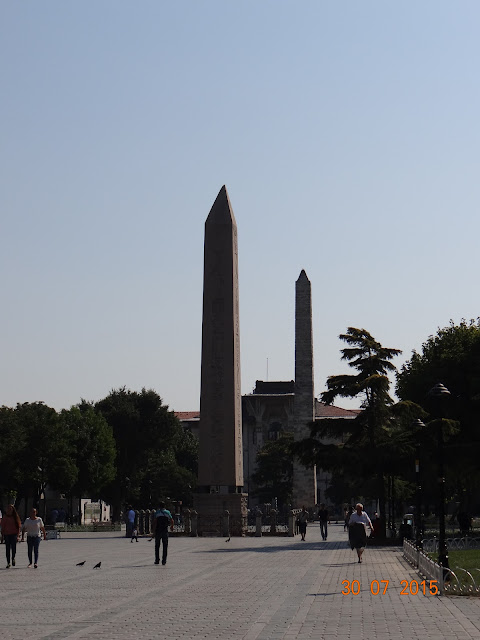 The Hippodrome became the centre of Byzantium's life for 1000 years and thereafter of Ottoman life for another 400 years and has been witness to countless political dramas. The Byzantine Emperors and nobility loved chariot races quite a lot, and this rectangular arena was their venue of choice for hosting such races after work of the imperial courts was done during the morning. In those days, the Hippodrome was decorated by obelisks and statues.
Originally, the arena here consisted of two levels of galleries, a central spine, starting boxes and the semicircular southern end known as the Sphendone. Some of these ruins still stand today. The galleries here were damaged during the Fourth Crusade and ended up being totally dismantled in the Ottoman period. Many of the original columns of the Hippodrome were used in construction of the Süleymaniye Mosque.
In the Byzantine era, there were two rival chariot teams - the 'Greens' and 'Blues', which had separate sectarian connections. Support for a team was akin to membership of a political party and a team victory had important effects on policy of the Byzantine Empire.
Sometimes, the Greens and Blues joined forces against the emperor. One such incident happened in 532 AD when a chariot race was disturbed by protests against Justinian's high tax regime. This protest escalated into the Nika riots (after the protesters' cry of Nika! or "Victory"). The protests were crushed with a heavy hand and thousands of protesters being massacred at the Hippodrome by the Byzantine Army. Chariot races were banned here for some time afterwards.
Learning from the Byzantines, the Ottoman sultans kept an eye on activities in the Hippodrome. If things were not smooth in the empire, crowds gathering here could signal the start of a disturbance, then a riot, then a revolution.
Being the centre of Istanbul (or Constantinople) and despite the ever-present threat of the Hippodrome being the scene of their downfall, the emperors and sultans who ruled the region, tried to leave their imprint behind. They tried to outdo one another in beautifying the Hippodrome, adorning the centre with statues from far and wide in their empire.
Unfortunately, with time, many of these priceless statues have disappeared, have been destroyed or have been stolen. Much of this ransacking happened during the Fourth Crusade when Christian soldiers invaded Constantinople and ransacked the Aya Sofya as well. The crusaders also stole the famous quadriga (team of four horses cast in bronze) which is now housed in the Basilica di San Marco in Venice. 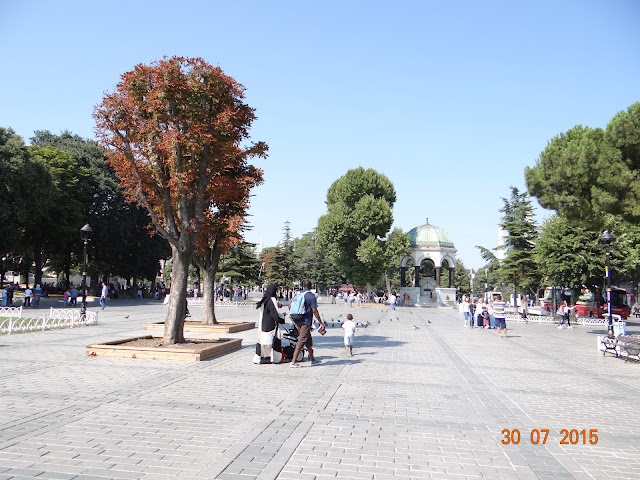 At the northern end of the Hippodrome, the little gazebo with beautiful stonework is known as Kaiser Wilhelm's Fountain. The German emperor, Kaiser Wilhelm, paid a state visit to Sultan Abdul Hamid II in 1898 and presented this fountain to the sultan and his people as a token of their friendship in 1901... 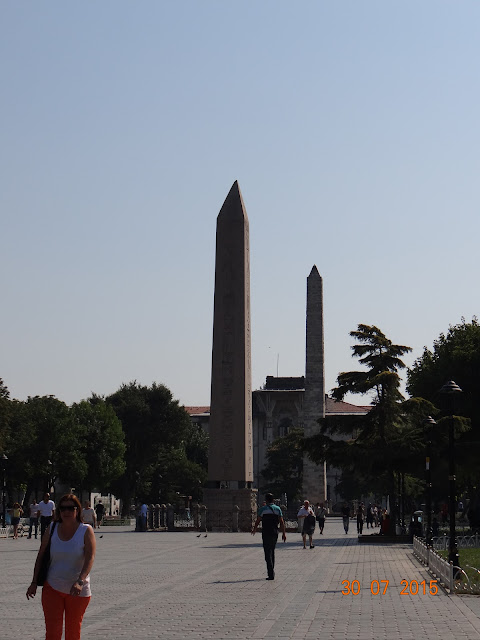 Emperor Theodosius the Great, in 390, brought a pink granite obelisk from Egypt and erected it inside the racing track. It was originally erected at the Temple of Karnak in Luxor during the reign of Thutmose III in about 1490 BC. Theodosius had the obelisk cut into three pieces and brought to Constantinople. Only the top section survives to this day, and what's intriguing is that the obelisk has survived nearly 3,500 years in astonishingly good condition...

In the 10th century the Emperor Constantine Porphyrogenitus built another obelisk at the Hippodrome. It was originally covered with gilded bronze plaques, but was ransacked by Latin troops in the Fourth Crusade, mistaking the plates for gold. The stone core of this monument also survives, known as the Walled Obelisk, which is at the far end of the frame... 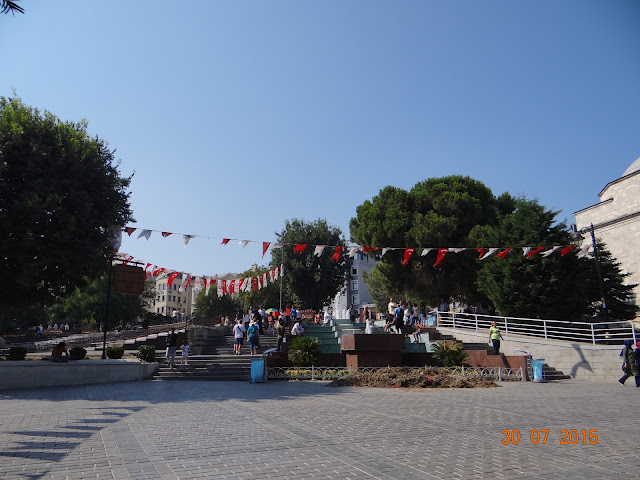 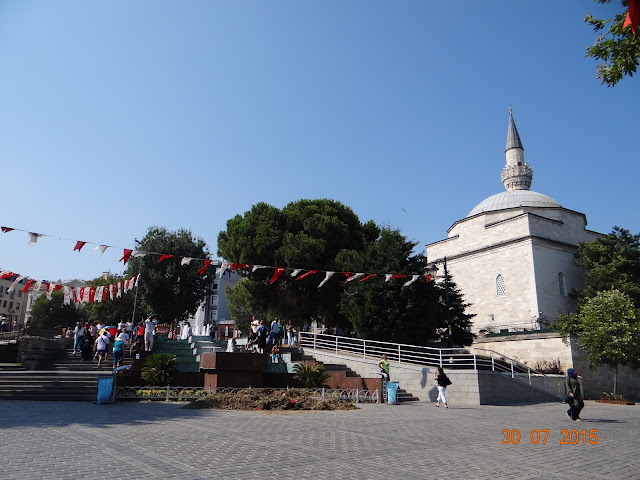 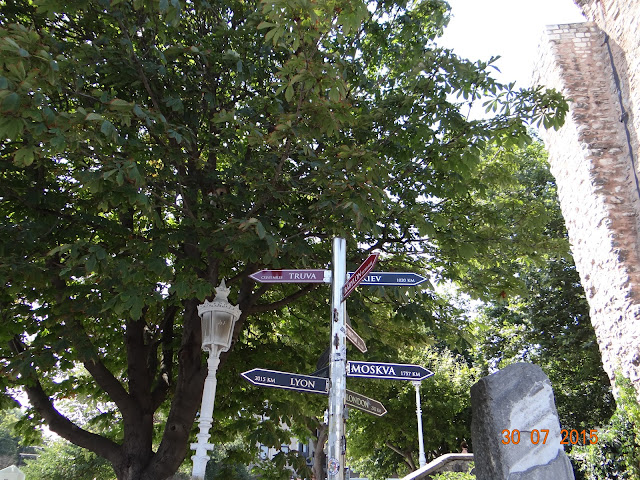 At the Million Stone or the Milion... 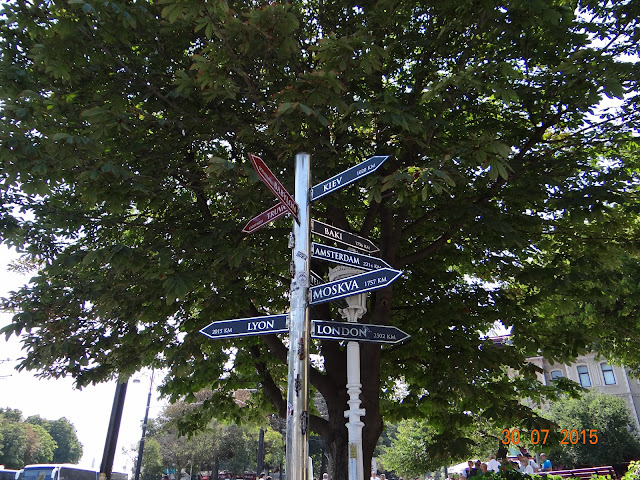 This was the starting point of roads leading into various corners of the Byzantine Empire... 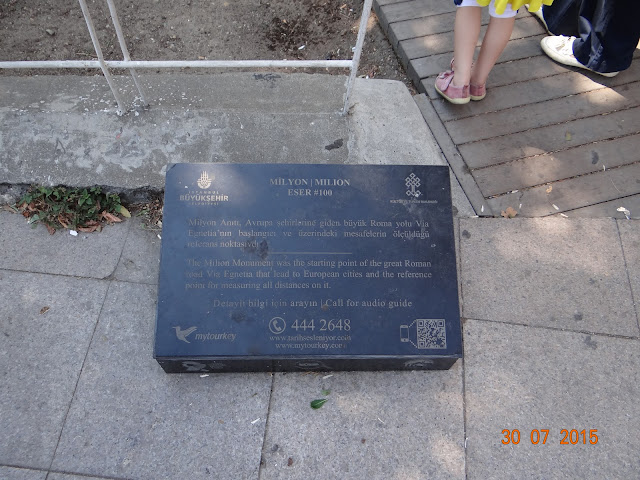 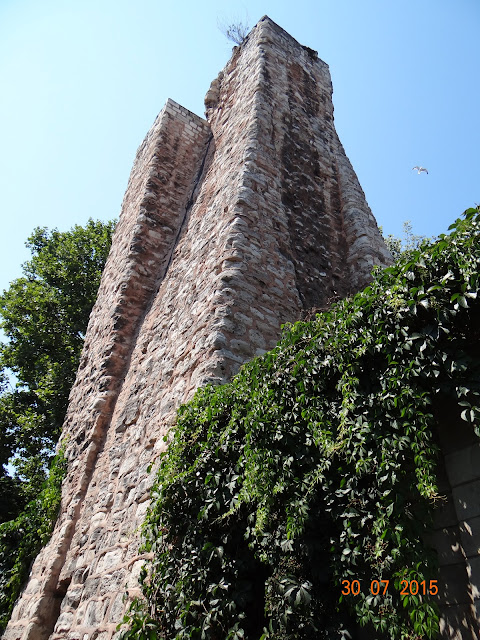 The domed building of the Milion rested on four large arches, and it was expanded and decorated with several statues and paintings. It survived the Ottoman conquest of Constantinople in 1453 but had disappeared by the start of the 16th century, but only its remains survive to this day... 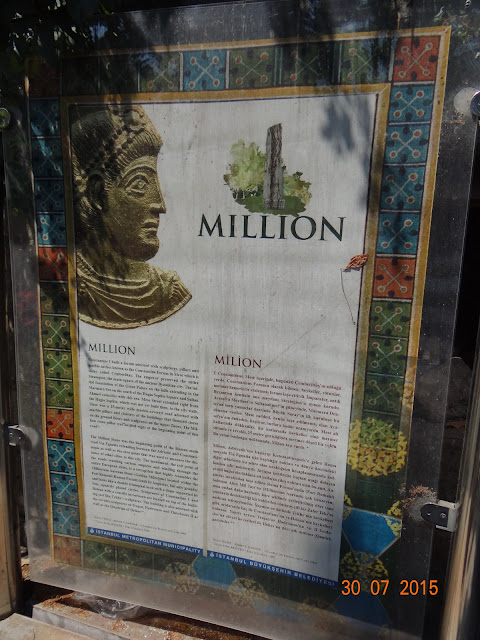 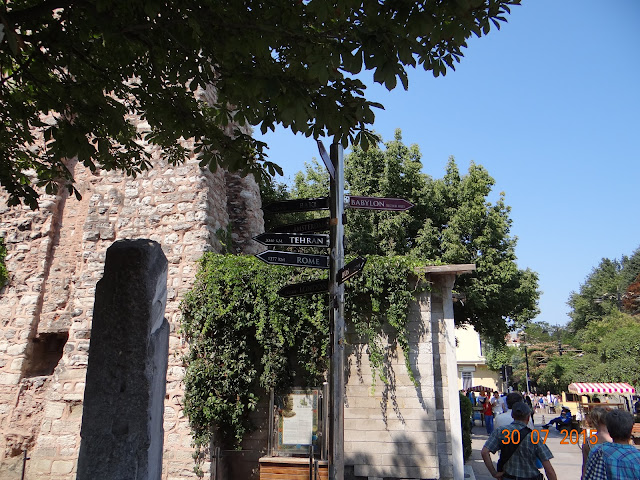 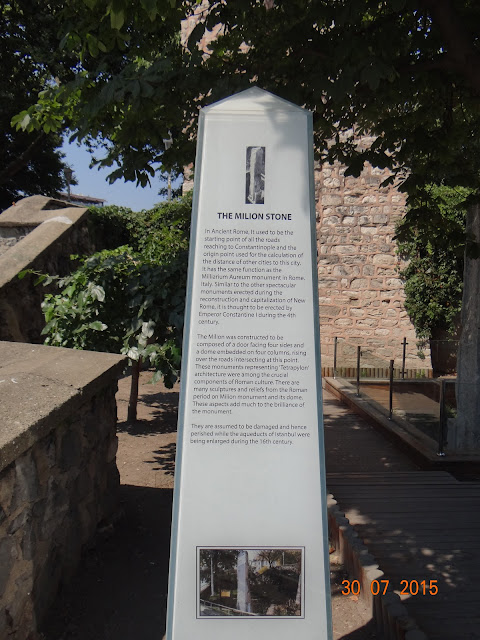 The Milion would have served as the starting point of journeys for many traders of medieval era... 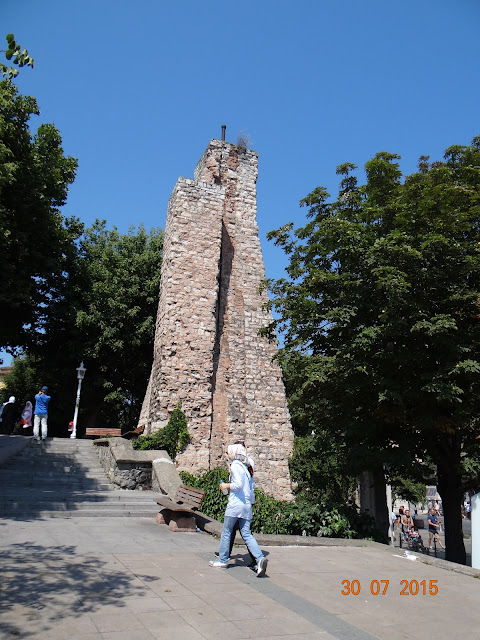 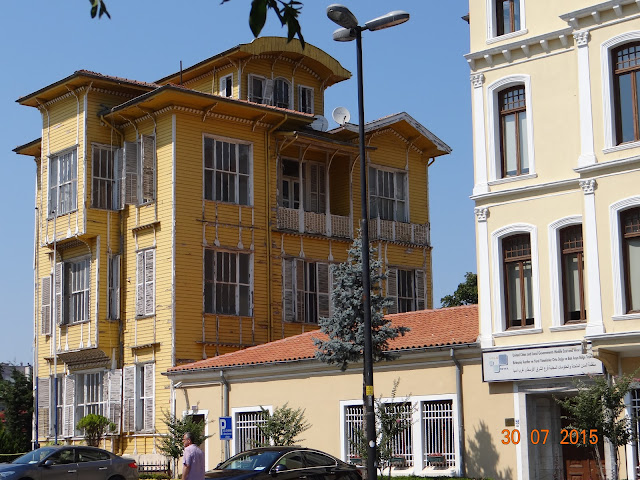 And this building woke me up from my daydream - I am in modern Istanbul and not in the Hippodrome of the Byzantine era... 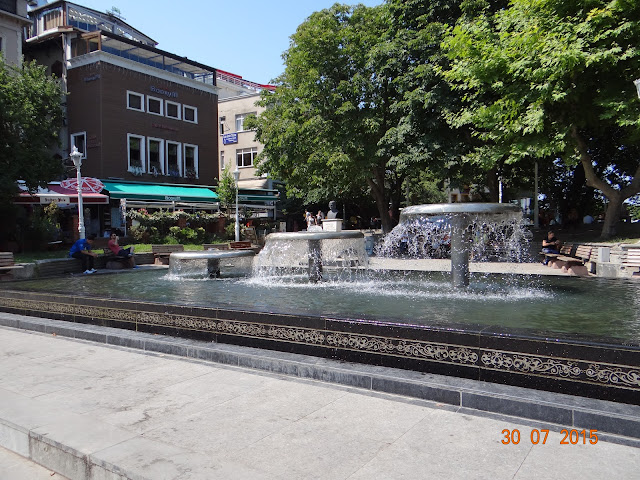 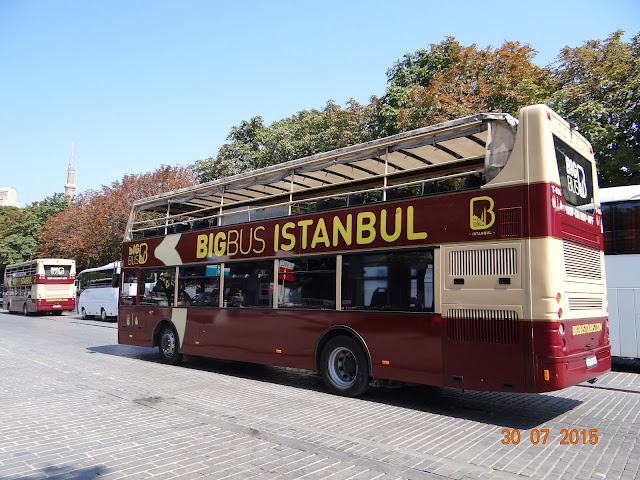 Like many on this bus, we too are now heading to our next destination - the Grand Bazar...