The ride from Beijing Capital International Airport to Neelima's home at Shuangjing was very smooth. There not a single, not a single bump - we drove at a steady speed of about 90 kilometers an hour.
Oh! Talk about that in Mumbai!
The residential area in Shuangjing looked somewhat like Vashi, with shops, tea centres, banks, restaurants, laundry shops and beauty parlours on the streetside. The residential buildings were at a slight distance from the boundary wall. The gardens were neat, landscaped and absolutely beautiful.
We settled into Neelima's apartment, opened up the bags and all the goodies were retrieved. Unfortunately, the parathas we brought alongwith us from Mumbai had gone bad. But Neelima had made excellent rajma and a zucchini gravy.
After lunch, we had a quick tea with chocolate cake and mysore pak and set out for Sanlitun. We took the subway, the most convenient way to get around the city. The subway fares are kept low at a flat rate of RMB 2 per person irrespective of the distance travelled. That's a good way, in my opinion, of getting people off the roads, easing the pressure there. Obviously for public good, environment, etcetra, it makes sense to keep the fares low, notwithstanding the fact that subway system would make losses.
It was a bright sunny afternoon when we got off at the Dongzhimen (东直门) station. Trees lined the avenue which had Middle Eastern restaurants on both sides. 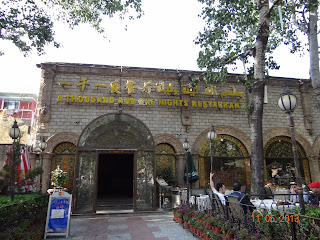 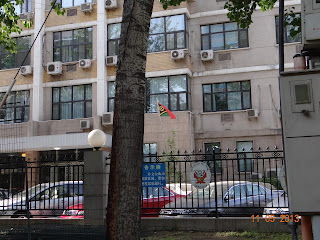 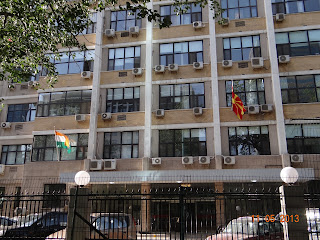 We passed by a building that was home to the diplomatic missions of Niger, Macedonia and Vanuatu, which was guarded by official security personnel who stood as still as statues. Seeing the flag of Vanuatu fluttering in the breeze reminded me of how China and Taiwan have competed for diplomatic recognition in the South Pacific and the Caribbean, very often with the inducement of aid and cheap funding. 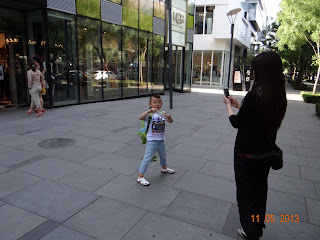 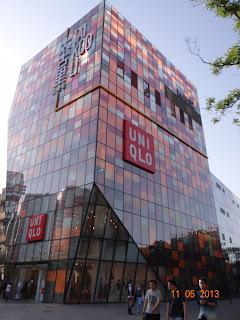 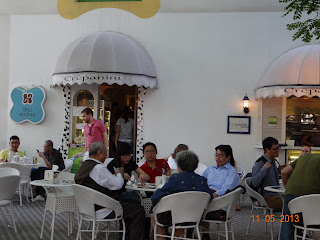 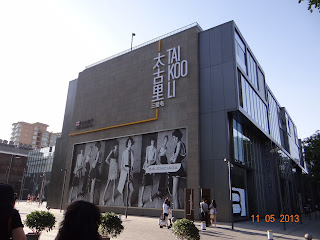 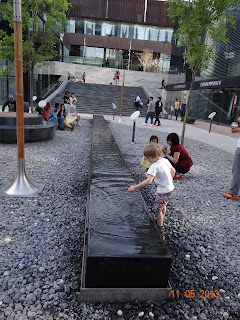 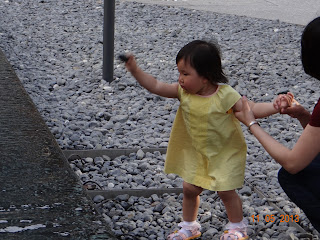 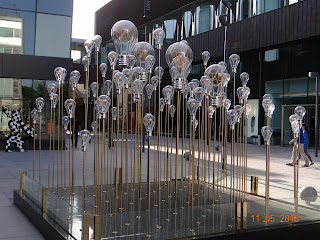 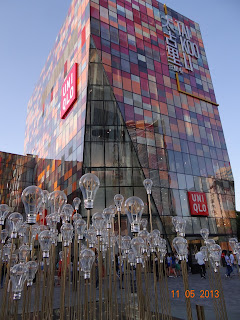 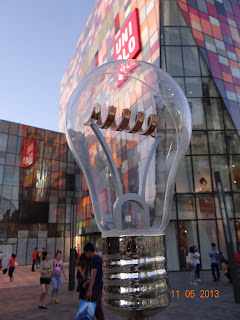 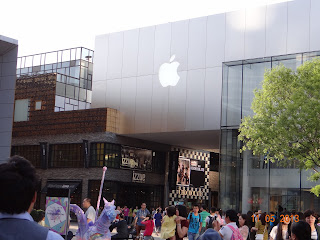 Soon we reached Sanlitun. The place is a pedestrian paradise, with high end brands, bars, restaurants, street side eateries, open areas with music synchronised fountains. Kids were frolicking around and having a great time. Most of the buildings here are developed by the Swire Group, a Hong Kong based conglomerate which also owns Cathay Pacific.
Clearly, China had massively benefited from investment inflows from billionaires like Li Ka Shing, the Kwok brothers, Stanley Ho and others in Hong Kong, Macau and Taiwan, besides inflows from the diaspora elsewhere.
While there have been lingering reports of crony capitalism, it appeared that the common man on the street in Beijing was quite content and happy - I believe if a rising economic tide lifts there would a general feeling of well being and no one will raise the stink of  corruption, but the story would very different if development is stalled. If wealth is squandered and stashed away by a few at the cost of development, there will be a massive stink, as we see in India today. It appears the Chinese rulers have been far more astute than the pundits of democracy here!
As these thoughts consumed my energy, we needed relax a bit. We stepped into Starbucks, which was a welcome respite from the heat outside. While Neelima and Neeti went for conventional cold coffees and tea, I chose an exotic looking red bean green tea frappuccino! I thoroughly enjoyed the drink, even as the red bean was actually our own rajma! 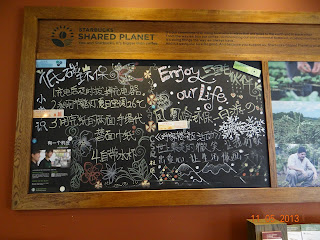 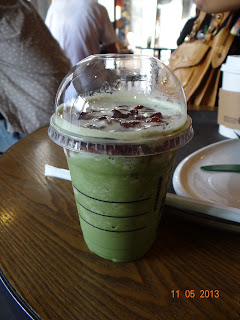 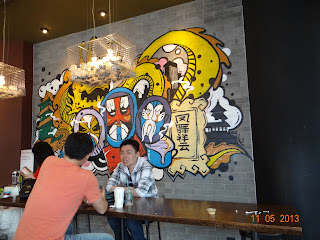 We also stopped by at Qi Yuan Market - a shop which caters to the specific requirements that we Indians have - lentils, spices and what not. Seeing this store being run by a local was heartwarming and proof enough that the world is indeed shrinking. 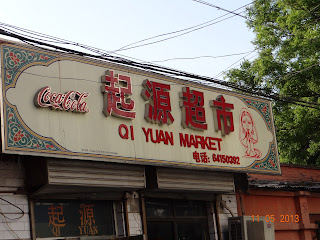 As evening was setting in, food carts were being prepared for the long night ahead. Naturally, pub-hoppers would stop by for hearty snack - a yummy sausage, bun, or a pancake. 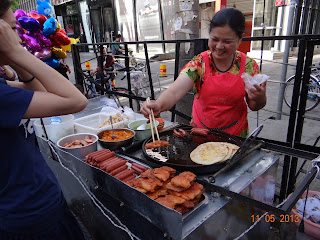 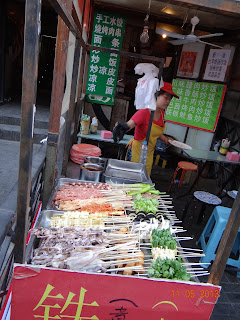 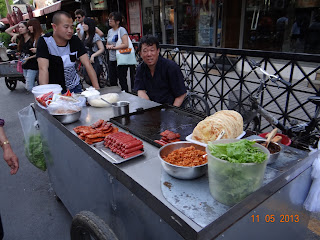 We stepped into the market called Yashow (雅秀), housed in a 6-storied building. Yashow is renowned for imitation stuff that can be all yours if your successfully drive a hard bargain. There were all those Louis Vuitton, Dolce & Gabbana, Gucci, Hermes, Armani, Burberry fakes peering at us from each store. Men walked up to me and offered to sell me "Lolex" watches, which I found quite funny. We did pick some stuff. The way it works here is amazing - the seller will give you a quote and you would offer only 10% of what was quoted. After string of sing-song "okkays" and "no okkays", an art perfected by Neelima despite the language barrier, the deal would be closed at about 20% of the initial quote. The seller would still complain of the price but would say he would do a favour for his "sisters" - both Neelima and Neeti. Hopefully, these skills will come in handy in China over the next few days here! 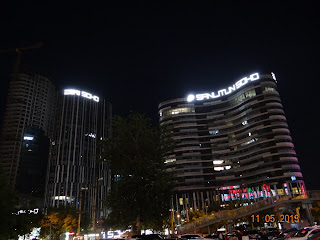 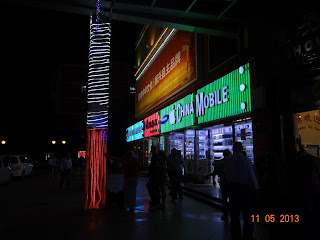 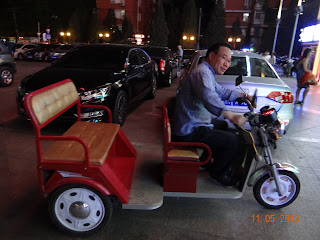 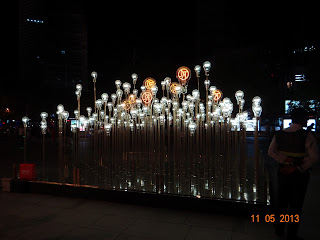 By the time we stepped out of Yashow, it was dark, but Sanlitun had a unique brightness to it. The streets were full of people - families out for a Saturday night treat, dating couples and friends - all in search for a good time! We too found a Lebanese place, had a few sandwiches and rushed back to catch up on the much needed sleep.
But today is another day! We got up fresh and raring to go! We'll soon step out to the neighbourhood stores to pick up some groceries and fruit before we head to the heart of Beijing, Tiananmen Square!
Posted by Rajeev at 6:21 AM