Afterall, despite all our apprehensions, our cab did turn up on time at 4 AM. There were those teary goodbyes as we loaded our bags on to the cab. And we started the second leg of our Chinese trip (and I hope the most enthralling) to the heart of China - the town of Zhangjiajie in Hunan province.
The ride to Beijing Capital International Airport's Terminal 2 was smooth. Despite the distance of about 28-30 kilometers from Shuangjing to the airport, we got there in under 30 minutes, at about 5AM.
Terminal 2 is mainly used for domestic flights as well as flights with the Greater China area - Hong Kong, Macau and Taiwan and a few flights to South East Asia, Russia, Korea, Japan and CIScountries. The newer Terminal 3, where we landed on Saturday, was built before the 2008 Olympics and is usually used intercontinental operations and premium carriers flying to Hong Kong, Macau and Taiwan.
Our flight was at 6.40AM, but the airport was teeming with people headed to all over China - Kunming, Lhasa, Urumqi, Wuhan, Ningbo, Changsha and many other places. 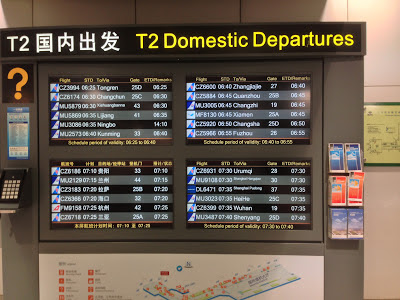 We tried to access the lounge facilities but unfortunately Priority Pass cards are not accepted on Terminal 2. But I was not complaining - while Neeti relaxed in front of gate 27, I gallivanted all over the terminal, planespotting! After feverish clicking all over, we had a sandwich each that Neelima had packed for us, warning us that if at all we get any grub on board, it would be unappetizing!
We were to fly China Southern Airlines's flight CZ6600 on an Airbus A320 to Zhangjiajie's Hehua Airport, which incidentally was previously known as Dayong.
At about 6.15AM we boarded. The China Southern A320 looked fresh and spotlessly clean. Unlike India, Chinese airlines have a 3-class configuration on their narrow-bodies - first, business and economy! We settled into our seats, which were quite comfortable. Bored by now, I "inspected" the contents of seat pocket and China Southern's inflight magazine boldly said Ni Hao to us! 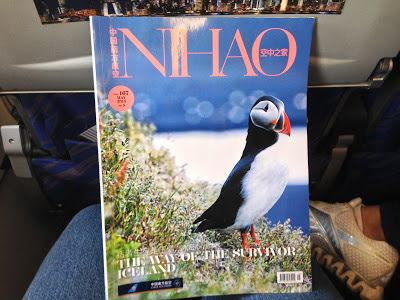 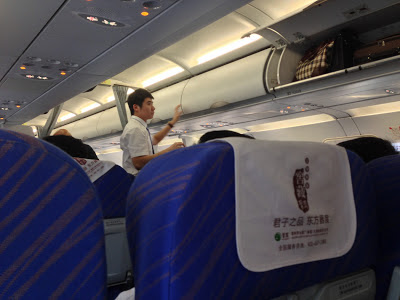 The cabin crew was smart and efficient. The cabin was prepared for take-off within 10 minutes of boarding - no nonsense, no pussyfooting. However, since the cabin was a bit cold, we asked for blankets. The cabin crew's English was limited. When they did understand, we got a "sorry" for an answer.
We taxiied towards Runway 36L-18R, crossing the bridge over the interterminal 6-lane road and headed full  throttle to take off from PEK. 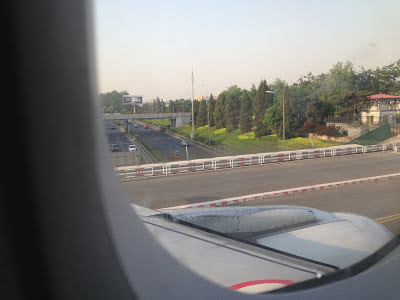 The flight itself was uneventful thereafter - we were both a bit exhausted after just 3 hours of sleep the previous night. About 30 minutes into the flight, we were woken up - the meal service had started. We were served a bowl of salad, noodles with pork cubes, a muffin with Chinese green tea. Neeti chose not to have anything and dozed off again. The meal was basic, okay and met the objective of filling in my tummy.
After breakfast, I dozed off again only to be woken when were on the final approach to the Hehua Airport. It was quite cloudy but from whatever was visible, the place looked pristine - green was everywhere - paddy fields and hilly grasslands. 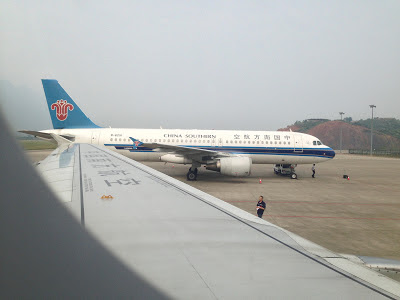 We were led by a "Follow Me" vehiclefrom Runway 08-26 to our parking bay, next to a China Southern Airbus A319.
Neeti took a few moments to wake up and we were among the last few passengers to disembark and get onto the bus to the terminal, where our guide Sam was waiting to pick us up.
Now look forward to the adventures that await us in Zhangjiajie!!!!
Posted by Rajeev at 7:16 AM