By the time we reached the boarding gate, announcements were being made that CX 390, our flight to Beijing would be opened for boarding in 10 minutes. The announcements were in Cantonese and English. The Cantonese announcements by the female announcer sounded like a sweet song minus the music (this was something I observed in Hong Kong a few years earlier and later when we reached Beijing). In fact, I have always found the Chinese women smarter with a keen sense of fashion when compared to the guys, who look rather dumb with all kinds of weird hairdos, attire and glasses.
I was keenly waiting to fly on the Boeing 747-400, in fact I chose this flight so that I could fly on this aircraft. I have always found this plane an absolute beauty, but increasingly airlines are finding it uneconomical to fly. Probably this was the last time I would be flying on this beauty. 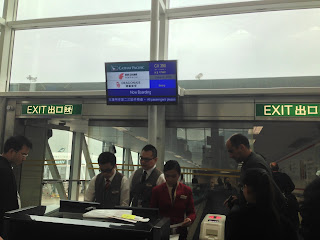 We boarded the flight. We were on the rear of the aircraft. Behind our seats were a French woman from the Bourdeaux region and a middle-aged guy from Texas. This was a 3-4-3 layout - an immaculately dressed English woman (in business attire) sat next to us. The duo behind us got into an animated conversation - it turned out that the Texan had a German wife who came from a region around the French border, where the cuisine follows French traditions. The lady kept talking about the virtues of Bordeaux wines.
As more people boarded, naturally the cabin got noisier, the duo started off on what seemed like an endless rant on the "culture" and "manners" of the Chinese people. Had they been ranting like this about India and Indians, I would have given them a good earful. Perhaps these whites had forgotten that their countries were surviving on borrowed money, mainly from the Chinese. Thankfully for us, the British lady next to us maintained a dignified silence, all though the flight.
As we were readying for taxiing, it started to drizzle. That disappointed me - my aircraft spotting pictures would get screwed! 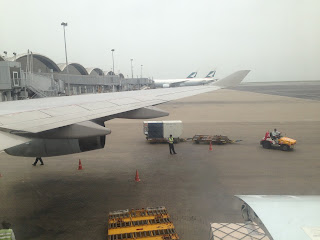 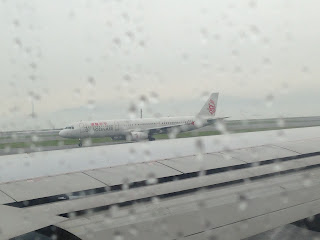 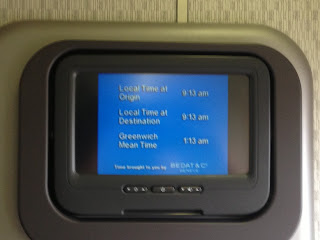 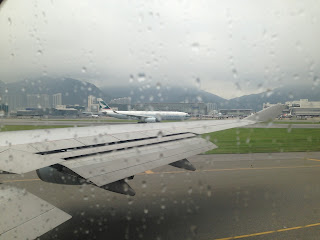 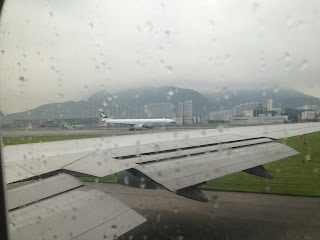 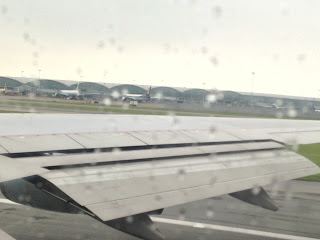 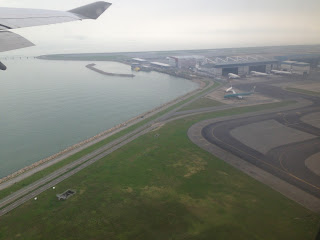 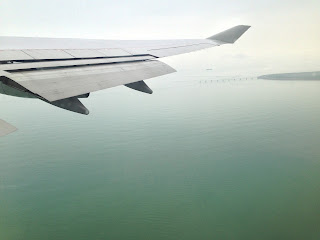 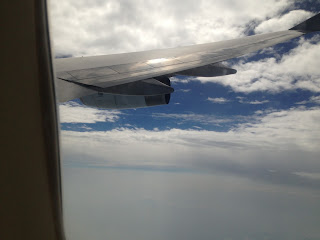 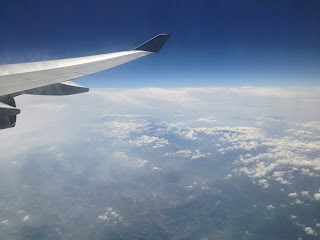 We took off and after a while reached cruising altitude. The Pearl River valley looked resplendent in its varied hues of green. We were on course in the north-north westerly direction for Beijing. I caught up with the reading - the three newspapers that I had brought along from Hong Kong. 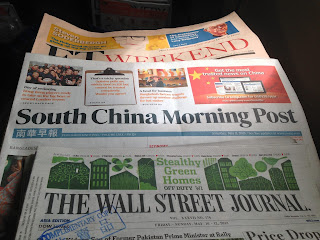 The galleys got into action as we settled in on the cruising altitude. Neeti got her special meal that I had ordered - upma, vada, idli, sambhar and fruit! She was squeaming with joy to see her favourite food in alien skies, more so because it was delicious! In the standard meal there was a choice of chicken congee or omelette with sausages and stir-fried vegetables. Since I already had congee earlier in the morning, I chose the omelette breakfast. 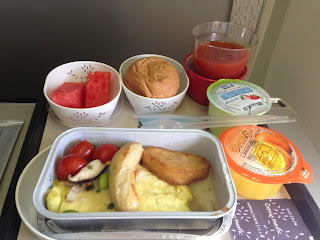 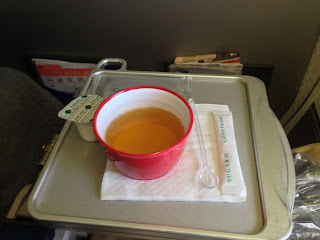 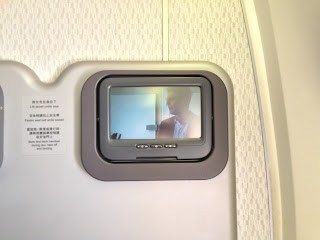 I again couldn't sleep a wink, so I watched Anthony Bourdain's The Layover which featured Paris. Very soon we were descending into Beijing. The landscape was stark, a sandy brown colour. As we approached Beijing, the view from the air gave an amazing sense of orderliness - the roads were wide and had a  belt of trees on both sides. 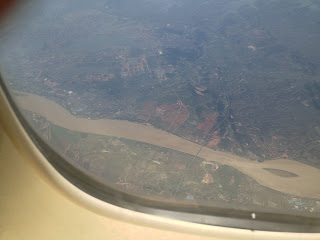 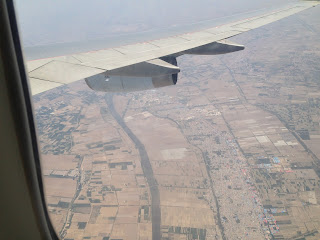 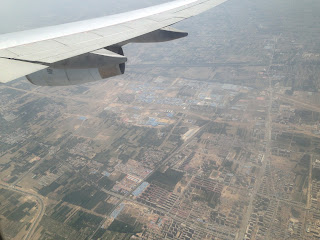 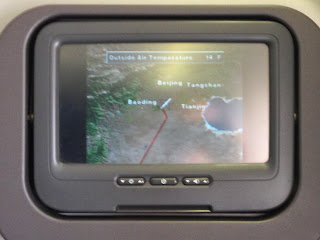 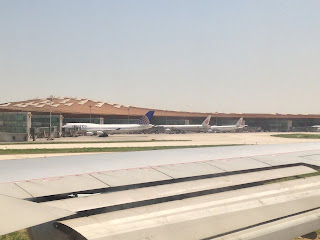 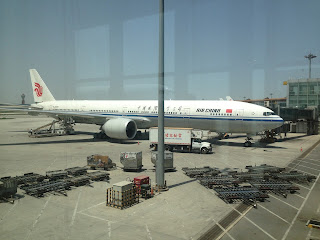 Touchdown was smooth. We had landed at Beijing Capital International Airport. The terminal, Terminal 3, looked impressive and smart, with quite a few similarities with our own T3 at Delhi. Clearly these two airports signal the growth ambitions of this part of the world, something that the West cannot think of for now, perhaps the duo behind were still living in the past and did not realise the realities of today.
The line up of aircraft at Terminal 3 was impressive - besides Air China, Dragonair and Cathay Pacific aircraft, there were a Korean Air Boeing 747-400, an Aeroflot Airbus A330, a Rossiya Ilyushin IL96 and a China Southern Airbus A380.
On deplaning, we headed for immigration which was smooth. We were done in 5 minutes. Baggage took about 10-15 minutes and then we headed out, where found Neelima waiting for us. And the joke was Salman Khurshid, who was in Beijing at that time had ensured that our entry into China was smooth! 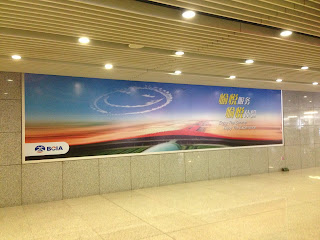 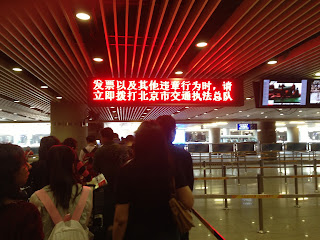 And as we wait for our taxi to come, I was already marveling at the orderliness, the cleanliness and the civic sense in this part of the world!
I could only doff my hat and say Ni Hao Zhongguo ( 你好 中國), or Hello China!
Posted by Rajeev at 10:20 AM