Our first morning in Shanghai started rather early at about 1.30AM, when we landed at Shanghai's Pudong International Airport. After a long drive in Shaun's Roewe, we reached the historic Bund area in Shanghai's Puxi - Shanghai we were told was broadly divided into two areas - Puxi or the old, historic part of the city and Pundong or the new ultra modern part of the city.
During the 40 kilometer drive from Pudong Airport to the Bund, Shaun told us that Pudong was an agricultural area till about 20 years back. Now you have massive developments all over - the new Pudong Airport has come up, you have a Maglev running from Pudong to the old part of Shanghai - it takes you there in a flat 15 minute ride, besides the new expressways.
Whilst earlier, Pudong was accessible from Puxi only by ferry, today there are 12 bridges and 13 tunnels - and in Mumbai we only have two bridges connecting Navi Mumbai, while only an astrologer can tell you when the trans-harbour link would come up. Perhaps, there is a heavy price to pay for democracy, development clearly is a casualty in India.
As we drove into Puxi, there were visible remnants of the past - warehouses and factories being redeveloped into office spaces, recreational areas, malls and entertainment zones. The Bund reminded me of Marine Drive, colonial buildings stood magnificently. Being early Saturday morning, crowds were teeming out of bars and pubs on the Bund. Shaun took pains to point out how law-abiding the Shanghainese were - revelers patiently waited for their taxis - drunken driving is massively penalised in Shanghai.
We checked-in at our hotel at the Bund and settled in for an MTR meal with cuppo-noodles, a break from the exotic Chinese meals I had been relishing so far. Then, a FaceTime call with Neeti's sister followed after which we retired.
Towards noon, Shaun came to pick us up for the day's tour in Shanghai. The first stop was Yufo Chan Sì or the Jade Buddha Temple. 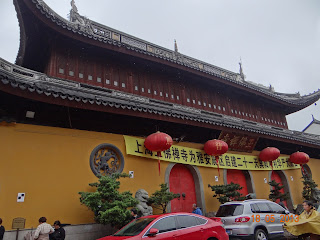 The origins of this temple date back to the 1800s. Hui Gen, an abbot from Mount Putuo went on a pilgrimage to Tibet via the two famous Chinese mountains Mount Wutai and Mount Emei and later Burma. In Burma, Chen Jun-Pu, an ethnic Chinese resident in Burma, donated five Jade statues of Buddha to Hui Gen, who transported two of them back to Jiang-wan, Shanghai. Here Hui Gen had a temple built with donated funds, and died shortly thereafter. This temple was occupied during the 1911 uprising, and the statues were moved and secured at Maigen Road.
An abbot by the name of Ke Chen later had a new temple built on land donated by a devout Buddhist, Sheng Xuanhuai, who was an official in the Qing court. The construction took ten years, and lasted from 1918-1928. 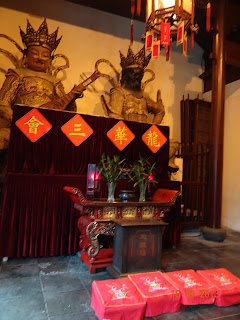 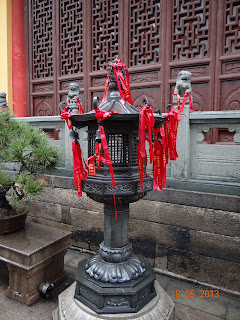 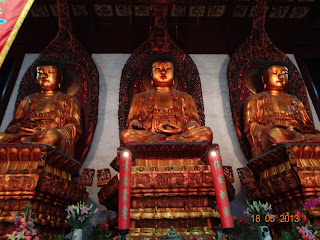 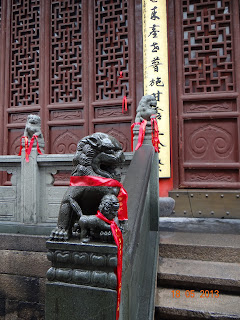 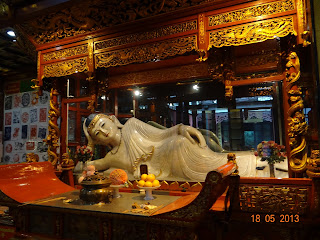 We heard stories of how the temple survived during the Cultural Revolution. The monks pasted portraits of Mao Zedong on the outside walls so that the Red Guards couldn't tear them down without destroying Mao's face as well. Shaun mentioned while he wasn't religious, he visited Yufo Chan Sì often out of his love and respect for his grandmother who was a believer! Indeed faith lives and is timeless!
As we moved between the various halls, Shaun wondered why Buddhism never took root in India, despite its origins there. Then we did a great deal of explaining - that Buddha is considered as an incarnation of Vishnu, and so Buddhists are one of us.
The temple itself had a calming influence on me. But we had to move on....
Posted by Rajeev at 10:59 AM