And it was time for another Southern Sojourn!
The journey began, yesterday, at Mumbai and we headed to Thiruchirapally (or Trichy as it is usually called), via Chennai.
It was a chaotic boarding at the departure gates, which resembled a Mumbai local train platform. The Jet Airways ground staff appeared as clueless as babies in a strip club, not understanding an iota of the discomfort they were putting us through.
The flight itself was quite uneventful, though upon landing at Chennai, it was a pleasant surprise to disembark at the new terminal which had been in the works for at least 2-3 years.
The terminal, though a bit small in terms of floorplate, had quite a modern, functional and swank feel to it. The first point of call was Sri Krishna Sweets, where my travel companion picked up some sweets. And then we headed for the security check for the onward flight to Trichy. Ahead of me was a sweet little boy, about 7 years old, with a tiny backpack. When the security guy asked him to place his bag on the x-ray machine conveyor, the little one said "Please give me a tray, I have an iPad in my backpack."
The security guy smiled, handed him a tray and this young lad retrieved his iPad with an uncharacteristic confidence and skill, which was obviously picked up from an adult. All of us in the queue as well as the security staff were all smiles.
After a cup of well deserved cup of tea at the Taj Lounge, it was time to board. We were on the Bombardier Q400 SpiceJet flight - a swanky new bird. The flight took off 10 minutes ahead of schedule. We landed on schedule and headed straight for the agenda of the day - a meeting in Trichy city.
After the meeting got over we headed to Perambalur about 60 kilometres for another impromptu meeting. There we figured out that we had to visit Sri Renganatha Temple at Srirangam, which also happens to be the Chief Minister, Jayalalitha's constituency. A person we met at Perambalur volunteered to show us around the temple complex - he incidentally is a big donor to the temple and knows the priests and other temple staff, which helped in easy access.
The temple is a shrine of Lord Vishnu. Here, like the Sri Padmanabha Temple at Thiruvananthapuram, Lord Vishnu is shown in a reclining posture, resting under the hood of a coiled serpent. Legend has it that in the early 1300s, the soldiers of the Slave Dynasty of Delhi invaded Srirangam and the the idol of the deity was stolen and taken to Delhi. In a daring exploit, devotees of Srirangam ventured to Delhi and enthralled the emperor with their histrionics. Moved by their talent, the emperor was pleased to "gift" them the presiding deity of Srirangam. There was another subsequent invasion by the barbarians and the locals took great pains to protect the deity from any harm. The deity was finally reinstalled in the temple after 6 decades!
Legends also talk of a French soldier, who in 1747, who had deserted the French Army, during the Carnatic wars, disguised himself as a Hindu convert and stole a diamond that formed the deity's eye. That massive diamond weighing over 32 grams found its way into the Imperial Court of Russia and is known today as the Orlov diamond! It was baffling as to how India was looted in the Middle Ages.
After the darshan we walked around the temple complex and saw the main shrine from the outside - we were told that it is believed that the main shrine descended from Vaikuntha, the heavenly abode of Gods. That reminded me of the series, Ancient Aliens, which is currently being aired on the History Channel. Perhaps there is a lot more to mythology than we can ever fathom, or would ever know in our lifetime! Perhaps, some mysteries are better left as mysteries, while we enjoy the moment... perhaps!
The whole temple complex covering 156 acres was then built around the shrine which descended from the skies. As per the custom, one has to complete the parikrama around the temple. Perhaps, that was the way religion kept people fit.
As we prepared to leave, we were guided to pick up some prasad - a pack of sweetmeats for travellers like us to carry back home alongwith a few tulsi (holy basil) leaves and small packs of kumkum and haldi (turmeric). 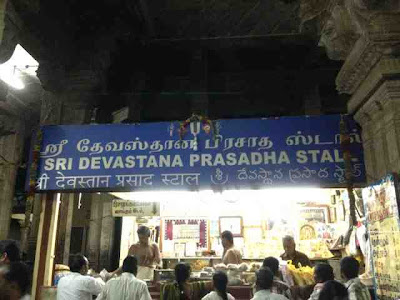 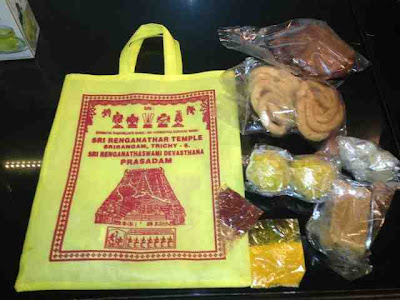 Another unique prasad for sale there is tamarind rice and curd rice, which we carried alongwith us to the hotel to have along with sambhar, spicy potatoes and yogurt. 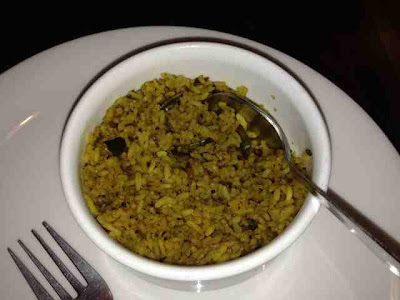 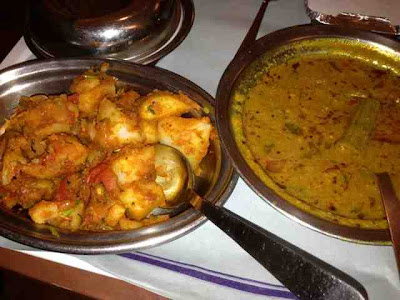 Early today morning we left for Coimbatore for a few meetings before we left for Mumbai. As we drove along along the highway, we could see clouds come and go, as though they were playing games with the sun. That was quite a sight. 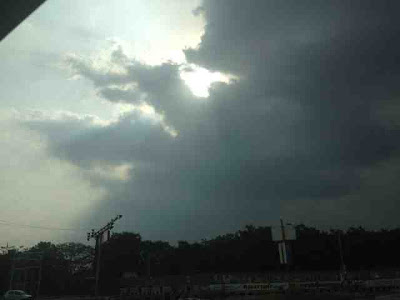 A few minutes back, I reached the Coimbatore Airport for my flight back into Mumbai. My first stop was at the Sri Krishna Sweets outlet, where I picked up box of Mysore Pak, which would go alongwith me to Beijing next week. 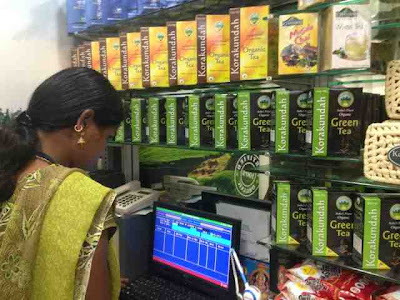 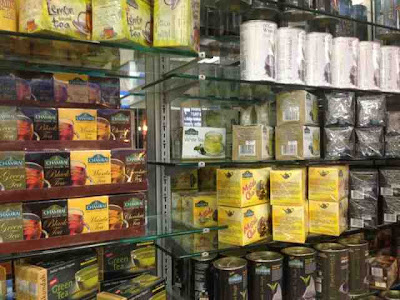 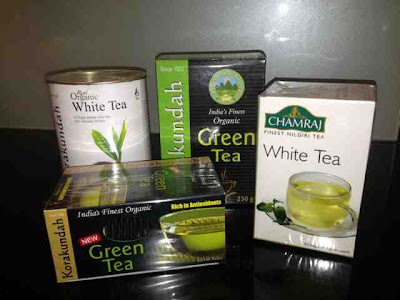 I was also delighted to see an outlet of Chamraj Tea, which has a wide array of interesting teas. I picked up a few for my late night cuppa! The thought of having an interesting cup of tea kept me excited all through the boring flight into Mumbai!
Posted by Rajeev at 7:36 PM