I Scaled The Great Wall!

So, finally we were headed to the Great Wall of China, one of the seven wonders of the world...
Our cab, to be chauffeured by a certain Mr. Ding, was to pick us up at 8AM from Shuangjing. The cab reached on the dot, but with a certain Mr. Yang, whose English was limited to "Okayyy" and "No".
We started off for Mutianyu, nearly 70 kilometers from Beijing city in the north easterly direction. Mr. Yang, an affable middle-aged, portly and balding Chinese, soon realised that communicating with us would be quite a major challenge, and was considerate enough to switch on Hit 88.7, Beijing's only FM station that plays English music. But we soon dozed off into a deep slumber.
By the time we woke up, we were in the countryside, with lush greenery all around us. In about 2 hours, we reached Mutianyu. There were a few cars in the Mutianyu parking lot and obviously we had made a good choice of coming in early before the rush! 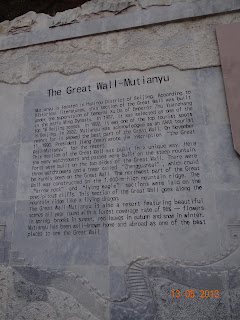 The section of the Great Wall at Mutianyu is considered as one of the best-preserved sections of the barrier that once stretched for nearly 8,850 kilometers. This section of the Great Wall used to serve as the northern barrier defending the capital and the imperial tombs from the Mongols in the North. Built in the mid-6th century, the Mutianyu Great Wall is older than the Badaling section of the Great Wall.
Besides protection, it is believed that the Great Wall served other purposes too, such as border controls, allowing the imposition of duties on goods transported along the Silk Route, regulation or encouragement of trade and the control of immigration and emigration.
The Wall itself is built from from local stone, quarried from nearby hills and white mortar. Legend has it that the white mortar was made of the crushed bones of the labour force! Under the Ming Dynasty, wall building was a national priority, and a draconian penal code swelled the ranks of forced laborers in to this gulag. Even a minor offence could mean a sentence laboring on the wall. Serious crimes were supposedly given perpetual sentences - if a prisoner was worked to death, a member of  his family would inherit the sentence and be forced to build the wall.
Perhaps, every wonder has a similar tragic story to tell, like, perhaps our own Taj Mahal - the workers were often killed or dismembered so that they would not work again on something as beautiful as this! 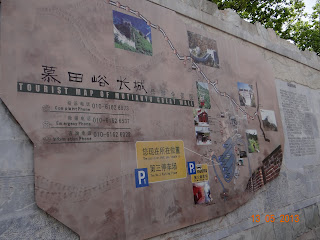 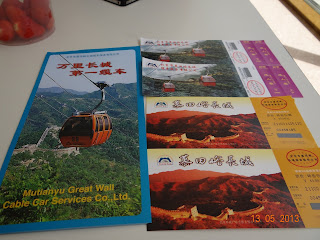 We rushed to buy the entry tickets and the gondola tickets, that would take us right up to the top. After a 5-7 minute gondola ride through verdant greenery, we got the first glimpse of the wall. 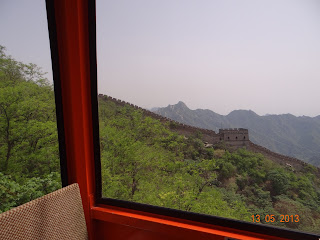 The Wall snakes up and down and zig-zags along the craggy hills, with watch towers at regular intervals. The watch towers would have a few soldiers each, but their main use was as relays for an elaborate smoke-signaling system to warn of any danger. The Ming had made signals from a mixture of wolf dung, sulphur, and potassium nitrate. The thick black smoke was such an effective warning signal that to this day the Chinese phrase "wolf smoke" means crisis. 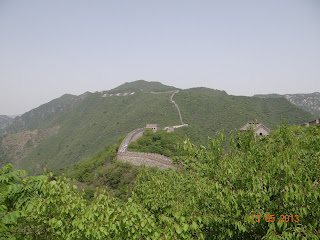 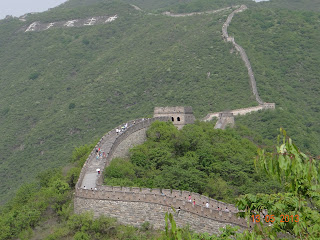 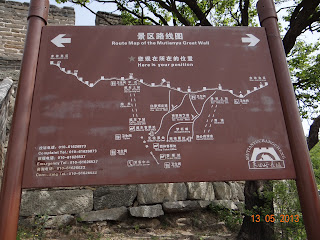 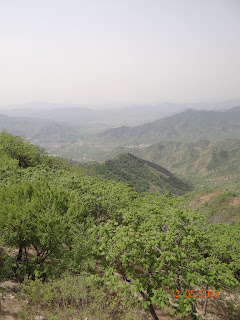 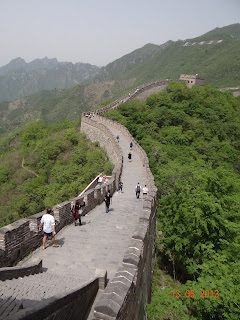 We walked up and down a one kilometer section of the Wall. It was exciting, interesting and teeming with visitors - there were quite a few French, Africans, Americans, English and Spanish. We were the only Indians there! 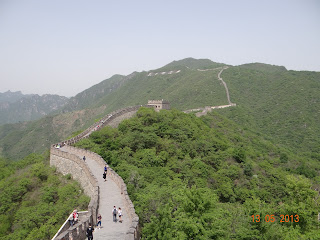 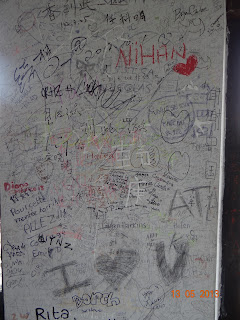 One of the watchtowers had a small section painted white, where visitors could inscribe their messages. Perhaps, this is a nicer outlet to certain uncontrollable emotions, rather than defacing the main sections. 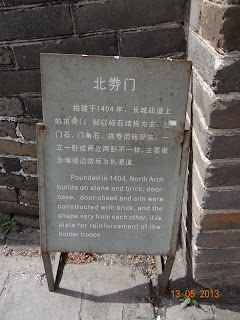 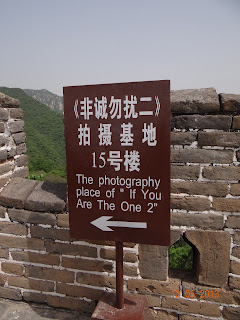 Apparently, a Mandarin movie by the name of If You Are The One 2 was shot here! The Chinese seemed to  be as crazy about their films and soaps as we are! (In fact Neelima told us that dubbed versions of Balika Vadhu or other Indian soaps are shown on Chinese television!) 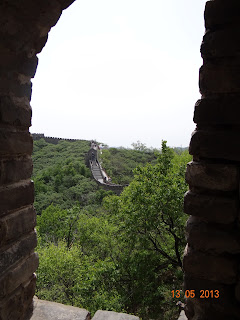 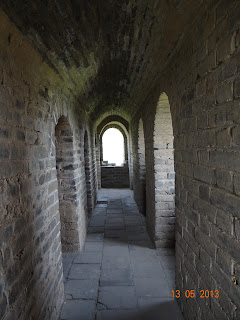 We had to visit the Summer Palace in the afternoon, so had to say bye to the Great Wall. We descended down through the woods and stopped for a while to have sandwiches that Neelima had packed for us. 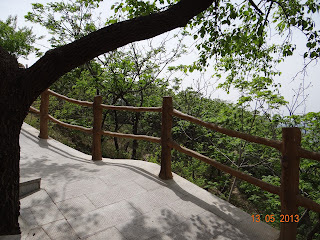 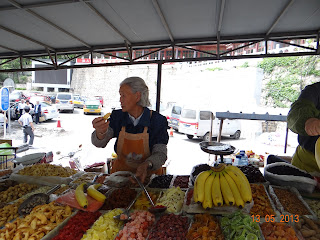 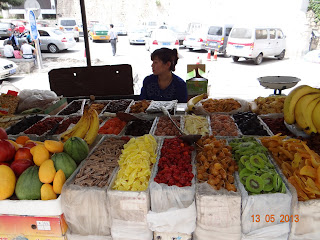 Once we descended down, we were greeted by the cacophony of vendors selling souvenirs, T-shirts, and food. A group of stalls had some grandmotherly ladies hawking candied fruit, which were quite delicious. There also were those interesting t-shirts of Obama in PLA fatigues! How much Americans would cringe to see Mr. President in communist battle wear! 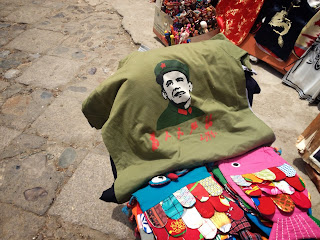 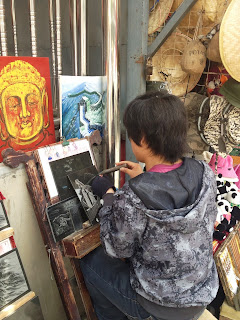 One vendor was engraving images and portraits on granite tiles, which were all very intricate and pretty! 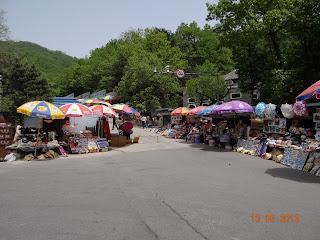 We roamed around at Mutianyu for a while, and Neeti kept insisting that I buy a "I Climbed The Great Wall" T-shirt, but I resisted all temptation to do that - experiencing the place and soaking in its history was far far more important for me than anything else!
Famished as we were, we stepped into the Subway there and Neeti, a pretty much conventional person, when it comes to food found her Veggie Delite there! I wonder if she confirmed it was mayo ro? The Subway was full of tourists, including an Israeli family with two small kids, who kept everyone entertained with their antics.
With the Subways done, it was time to head to the Summer Palace, another 2 hours' drive back to Beijing!
Posted by Rajeev at 1:23 PM